-9 — Rushing yards for Northwestern in the one-point loss to Michigan.  Quarterback Trevor Siemian totaled minus-37 yards rushing, while the Wildcats’ leading rusher, Justin Jackson, had plus-35.

.844 — Overall career winning percentage (54-10, fifth season) for Florida State’s Jimbo Fisher, the best for any ACC head coach with three or more seasons.  His winning percentage of .842 in ACC games is best of all-time, ahead of the legend he replaced at FSU, Bobby Bowden (.814).

1.3 — Interceptions for Louisville’s Gerod Holliman after a three-pick performance against Boston College.  Holliman now has 12 interceptions with two regular season games and a bowl game remaining; the all-time FBS record for interceptions in a season is 14 by Washington’s Al Worley in 1968.  Incidentally, there are only 17 FBS teams with more interceptions this season than Holliman.

2 — Rushing touchdowns allowed by Alabama’s defense this season, the fewest in the FBS.  Next lowest?  Utah’s allowed five.

2-7 — Record of teams the game after playing Navy this season.  That includes Notre Dame’s second loss of the season, a 55-31 decision to Arizona State this weekend.

3 — Weeks in a row a player from Rutgers’ opponent has been named as the Big Ten’s Player of the Week.  That streak temporarily came to an end this week as the Scarlet Knights are on a bye, although Indiana — and the nation’s second-leading rusher Tevin Coleman — await next week and could easily extend the streak to four straight.

4-3 — Touchdowns vs. incompletions for Hutson Mason in Georgia’s blowout win over Kentucky.

11 — Games in a row Oregon’s Marcus Mariota has thrown two or more touchdown passes, the longest such streak for an FBS quarterback.

13.1 — Nick Chubb‘s yards per carry average as he ran for 170 yards on just 13 rushes in Georgia’s blowout win over Kentucky. 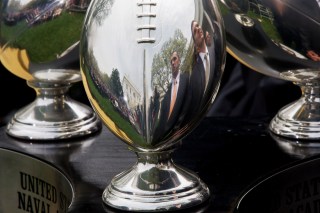 20-0 — Oklahoma’s record in its first 20 meetings with Baylor.  The Bears, however, have won three of the last four games vs. the Sooners, including Saturday’s 48-14 spanking.  The win over OU also marked BU’s first-ever win in Norman in 12 meetings.

21 — Consecutive bowl appearances for Virginia Tech, the second-longest streak in the country behind Florida State’s 32.  That streak is in jeopardy, however, as the 4-5 Hokies must win two of their last three games (at Duke, at Wake Forest, vs. Virginia) in order to reach bowl eligibility.

24 — Points Bowling Green scored off of five Akron turnovers in the Falcons’ 27-10 win over the Zips Tuesday night.

28 — Season-high in points put up by SMU in its loss to Tulsa Saturday.  77 FBS teams average more than that on the season.

33 — North Dakota State’s all-division-best winning streak that was snapped in Week 11 by Northern Iowa in resounding fashion, with the Panthers coming away with a 23-3 home win.

37 — Road games in a row Baylor had lost in a row to ranked teams prior to the win over Oklahoma, a streak that had stretched all the way back to 1991.  That was the longest such streak in the country; that “honor” now falls to Kentucky and its 23 straight. 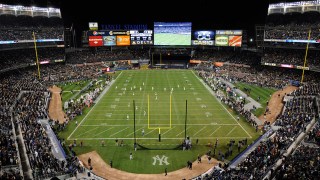 41 — Times Army has played a football game at new/old Yankee Stadium, including Saturday’s game against UConn.  The Black Knights were 14-19-5 at the old Bronx home of the Yankees, 1-2 at the new version including the Week 11 win to the Huskies.  That win, incidentally, was the service academy’s first at Yankee Stadium in 54 years.

47 — Games in a row with a reception for Wyoming’s Dominic Ruffin, the best current streak in the FBS and tying a school and Mountain West record held by Jovon Bouknight (2002-05).  The all-time FBS record of 53 is held by Central Michigan’s Bryan Anderson (2006-09).  As the Cowboys have at most four games remaining, the senior Ruffin won’t be able to match or exceed Anderson’s standard.

92 — Yards on Bill Belton‘s second-quarter scoring jaunt against Indiana, the longest rushing touchdown in the history of Penn State football.  Blair Thomas also had a 92-yard run in 1986, but that didn’t result in a score.

221 — Rushing yards for Cameron Artis-Payne in Auburn’s loss to Texas A&M.  His previous career-high was 177, set in the 2014 opener against Arkansas.

224 — Receiving yards for Corey Coleman in Baylor’s win over Oklahoma.  His previous career-high was 167, set a week before against Kansas.

446 — Passing yards for Everett Golson in Notre Dame’s loss to Arizona State.  It was Golson’s first 400-yard passing game, and bested his previous career-high of 362 set against Syracuse Sept. 27 this year.

965 — Rushing yards for Boston College’s Tyler Murphy entering Week 11, the most for any quarterback in the country (Mississippi State’s Dak Prescott had 725) and more than 16 teams had totaled all season.  The Florida transfer added 41 yards to that total in BC’s game against Louisville, his lowest out put of the season.

Thanks to an Auburn football player, it’s a two-for-Tuesday on the arrest front.  And, to clarify, that’s player in the singular.

According to the Montgomery Advertiser, Jashawn Sheffield was arrested May 9 in Georgia on one count of disorderly conduct.  But wait, there’s more.  Exactly one week later, the Tigers wide receiver was arrested in the Peach State yet again, this time “DUI Less Safe.”

Both of those charges, incidentally, are misdemeanors.

No details of what led to either arrest have been released.  As for the DUI charge?  The Advertiser writes that “[i]n the state of Georgia, a ‘DUI Less Safe’ can be charged if a law enforcement officer believes a driver is less safe behind the wheel because of alcohol consumption, even if that person is under a specific blood-alcohol content.”

As a result of the two off-field incidents, though, Sheffield has been indefinitely suspended by the Auburn football program.  AU football players are set to return to campus next week to commence voluntary workouts.  Because of the suspension, the receiver won’t be one of the ones returning.

Sheffield was a four-star member of the Auburn football Class of 2019.  The Georgia native was the No. 28 player in his home state regardless of position.  The 6-1, 183-pound receiver also played in the Under Armour All-America game.

As a true freshman, Sheffield appeared in one game.  He didn’t catch any passes in that lone appearance.  He did, though, rush for 30 yards on a pair of carries.

Because he played in four or fewer games, however, Sheffield was able to take a redshirt for the 2019 campaign.

Amidst these trying times across the country, LSU has made a couple of historic additions to its future football schedules.

Monday, LSU announced that it has added a pair of one-off football games with Grambling and Southern.  LSU will face Southern on Sept. 10, 2022.  Grambling and LSU will then tangle Sept. 9 the following season.  Obviously, both of those will be played at Tiger Stadium in Baton Rouge.

Both Grambling and Southern are Historically Black Colleges and Universities in the state of Louisiana.  It will mark the first time LSU has ever played either in football.

“This is an incredible opportunity to join our fan bases of these historic Louisiana institutions and championship programs,” athletic director Scott Woodward said in a statement. “These dates will be days to celebrate not only football, but the state of Louisiana and all of our people. It’s time and we are all proud to be a part of it.”

It appears Marshall will serve as a guinea pig for the rest of the college football world.

All three, incidentally, are asymptomatic.  None of the names are being released by the university.

Ahead of the return to campus, the individuals were tested for the virus.  All three are, per university protocol, now in isolation.  Their close contacts are being identified and instructed to follow appropriate protocols, including quarantine or self-isolation, the university stated.

Below are some of the guidelines being followed by the university:

“It shows that what you are doing is working,” said Marshall athletic director Mike Hamrick. “If a positive comes up, we’ve caught it and we can quarantine them. Everyone else was negative and what we set out to do with our testing is working. I think that’s the positive thing about it. You want to know. That’s why you test.”

As expected, the pandemic will impact this year’s matchup between Notre Dame and Navy.

Notre Dame and Navy are scheduled to open the 2020 season Aug. 29 in Dublin, Ireland.  While there were talks about moving the game, Navy’s athletic director was confident the game would still be played as scheduled.  And where scheduled.  In late April, though, it was confirmed that, even if the game could be played in Dublin, it would likely be fan-less.

Tuesday morning, the inevitable occurred as it was announced the matchup between Notre Dame and Navy will not be played in Dublin.  Instead, it will take place in Annapolis at Navy-Marine Corps Memorial Stadium.

This will mark the first-ever time the rivalry game has been played at the home of the Midshipmen.

“We are obviously disappointed not to be traveling to Ireland this August,” the Navy AD, Chet Gladchuk, said in a statement. “But, as expected, our priority must be ensuring the health and safety of all involved. I am expecting that we will still be able to play Notre Dame as our season opener, but there is still much to be determined by health officials and those that govern college football at large. Once we have a definitive plan in place, we will announce the specifics pertaining to the game. I am extremely grateful to all that were involved in the planning of our game in Aviva Stadium, especially John Anthony and Padraic O’Kane who created what would have been another extraordinary event in Dublin. I realize many are disappointed and were looking forward to the spectacle of this event and a visit to the Emerald Isle, but I do know there is a complete understanding of why it’s in our best interests to make every effort to relocate the game.”

“Our student-athletes have had great experiences competing in Ireland and are very disappointed not to be returning to Dublin in 2020,” said Gladchuk’s counterpart with the Fighting Irish, Jack Swarbrick, in his statement. “The change of venue has been a very difficult decision for our colleagues at the Naval Academy, but we are in full support of their choice. We are also grateful for everything our partners in Ireland have done to make this a smooth transition. We look forward to going back to Ireland for a game in the not too distant future.”

In addition to the venue change, the date will be changed as well.  While not yet determined, it will be played Labor Day weekend on either that Saturday (Sept. 5) or Sunday (Sept. 6).

This year’s game will mark the 94th-consecutive meeting between the programs, making it the longest-continuous-intersectional rivalry in the country.

College Football in Coronavirus Quarantine: On this day in CFT history, including a judge wondering why the late Joe Paterno didn’t do more June 2, 2020 8:24 am

College Football in Coronavirus Quarantine: On this day in CFT history, including Mack Brown in 2017 not ruling out a return to coaching ‘if the right situation came up’ June 1, 2020 8:24 am
Privacy Policy | Terms of Service
Powered by WordPress.com VIP