Oregon and Ohio State could not have arrived to the College Football Playoff national championship game in any more different fashions at the quarterback situation. The preseason hype started with legitimate and worthy Heisman Trophy buzz for the starting quarterbacks at Oregon and Ohio State, the Ducks with Marcus Mariota fulfilling that hype with the first Heisman Trophy in school history and Ohio State with Braxton Miller, who never played a down for the Buckeyes this season due to a shoulder operation just before the start of the season. No Braxton was thought to derail the championship hopes of the Buckeyes before the first kickoff of the season, but now Ohio State has a chance to complete the mission with its third-string quarterback, Cardale Jones, leading the offense.

It is probably unfair to continue referring to Jones as a third-string quarterback. It is not as though Jones arrived to Ohio State without talent or potential to make things happen. Rivals only rated him a three-star prospect, recruited by Jim Tressel, but he was also the 12th best pro-style quarterback in the nation in the Class of 2011. A couple of years on the sideline have actually served Jones well for taking on the incredible task he was handed at the end of the regular season. 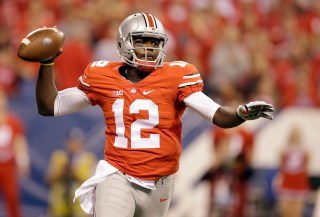 Jones was thrown into the starting job following the season-ending injury to star freshman J.T. Barrett, who himself had seemed to defy the odds against him in replacing Miller to lead Ohio State to a division title to keep the Buckeyes in the playoff conversation. Questions about whether or not Jones could make his first career start in the Big Ten championship game and avoid costing Ohio State a Big Ten title were put to rest in blowout fashion. There are many reasons why Ohio State roughed up Wisconsin to the tune of 59-0, but Jones played a key role in shrugging aside any concerns by showing off what he is capable of doing. The coaching done by Tom Herman and Urban Meyer in preparing Jones for the opportunity should not go unnoticed, of course, but Jones still had to execute on the field. And boy has he.

If there is pressure on Jones, he does not show it. He appears to have the poise of a three-year starter, not a three-game starter. If he has to run, he does so with enough power to push forward when needed. He can air it deep down the field as well as throw a dart to his receiver. With the way Jones has taken on the role of starting quarterback the past two games, there is little reason to believe he is not the quarterback that can bring this bizarre season under center to a celebratory close for Ohio State.

Oregon’s quarterback story is far less intriguing, but no less impressive. While Meyer has been able to turn in one of the better coaching jobs of his career by working down the quarterback depth chart to reach the College Football Playoff national championship game, Oregon head coach Mark Helfrich has had far less to worry about with his quarterback. Marcus Mariota started the season already a household name, somewhat of a rarity for a player on the west coast not playing in Los Angeles. Mariota was a Heisman frontrunner from the start of the season with few questions to answer during the season. When Mariota did have something to prove, he did.

Going into the season the biggest question or reason for doubt Oregon or Mariota was what would happen when up against a team built on defense, which has been a crux for the dynamic offensive stylings of Oregon over the years. Michigan State? It wasn’t pretty for a while, but Mariota delivered in the clutch. Stanford? Mariota managed to chop down the tree this time. Arizona tripped Mariota and Oregon up in the regular season, but the Ducks charged past the Wildcats in the Pac-12 Championship Game with revenge on the line.

In a showdown of Heisman Trophy quarterbacks, Mariota came out on top of Florida State’s Jameis Winston. Mariota may not have been automatic against the Seminoles, but he was a big reason why Oregon managed to blow away the defending national champions in the Rose Bowl semifinal.

Mariota is a much more polished player than Jones is heading into the championship game, but that may not matter much. Mariota will be put to the test by an aggressive defensive front from the Buckeyes, but he has the experience to respond on the fly more often than not. Mistakes will be at a minimum when Mariota has control of the football. Will the Buckeyes be able to say the same about Jones?

The transfer portal has not been kind to the Texas State football program.  Again.

According to 247Sports.com, Jaylin Nelson has entered the NCAA transfer database.  No reason for the running back’s impending departure was given.

Nelson was a three-star member of the Texas State football Class of 2017.  It’s likely that the back will be leaving the Sun Belt Conference school as a graduate transfer.

During his time with the Bobcats, Nelson appeared in 24 games.  In that stretch, Nelson totaled 143 yards and a touchdown on 36 carries.  The Texas native also returned a pair of kicks for 34 yards.

Oh, and Nelson also attempted one pass.  Which he completed.  For 69 yards.  And a touchdown.

Nelson is at least the fifth Texas State football player to enter the portal this year.

Conversely, offensive lineman JP Urquidez transferred in from Texas in late April.  Or, more specifically, he committed to the Bobcats.

One of the baker’s dozen scholarship players who have left Nebraska has found a new college football home.  Unofficially.

Citing struggles with mental health and depression, Darien Chase entered the NCAA transfer database in mid-February.  That was the first step in leaving the Nebraska football program.

On Twitter this week, the wide receiver took the next step.  By committing to FCS Portland State.

“First I would like to thank God for getting me through these difficult times,” Chase wrote, ” and my family’s amazing support while being home.  I’ve chosen to stay off social media when it came to my recruiting process so I could make a clear decision on my next steps and commit to the school that makes the most sense for me.

“Thank you to all the universities who gave me the opportunity to play at their program.  I’ll forever be grateful.

“With that being said I’m proud to announce that I will be staying home and attending… Portland State University.”

Chase was a three-star 2019 signee. He was the No. 3 player at any position in the state of Washington.

Prior to committing to, then signing with Nebraska football, Chase had received scholarship offers from, among others, Washington, Oregon, Oregon State, Utah and Boise State. He took official visits to the latter two schools.

As a true freshman, Chase played in four games for the Cornhuskers. That will allow him to take a redshirt for the 2019 season.

In that limited action, Chase caught one pass for 13 yards.

In the aftermath of the despicable, abhorrent, unconscionable murder of George Floyd, a 46-year-old black man, at the knee of a white police officer, myriad FBS head coaches have spoken out and spoken up.  In fact, nearly six dozen of them have done so as of this posting.

Sunday evening, Nick Saban added his voice to the burgeoning call for change.  Below is the Alabama head football coach’s statement, in its entirety:

I am shocked and angered by the tragic deaths of George Floyd, Breonna Taylor and Ahmaud Arbery. We’re at an important moment in out country, and now is the time for us to choose kindness, tolerance, understanding, empathy, and most importantly … it’s time to love each other.  Every life is precious, and we must understand we have so many more things that unite us than divide us.

I’ve always been inspired and encouraged by examples set by those who came before us like Dr. Martin Luther King Jr., Rosa Parks, and so many others who devoted their lives to find peaceful ways to rid our society of social inequities. As Dr. King said, “Injustice anywhere is a threat to justice everywhere. We are caught in an inescapable network of mutuality, tied to a single garment of destiny. Whatever affects one directly, affects all indirectly.” We are all part of this and we must banish these types of injustices in not just our country, but our world. The ultimate future of our nation is in our hands, and like the teams I’ve been privileged to coach, we must depend on and respect each other no matter our differences. We must come together as a society and treat one another with respect and dignity.

Cal football is the latest to benefit from a Power Five-to-Power Five transfer.

Bradrick Shaw announced in January that he had been granted a sixth season of eligibility.  Instead of using that added year at Wisconsin, however, the running back opted to enter the NCAA transfer database.

Four months later, Shaw revealed on Twitter that he will be transferring into the Cal football program.

Suffice to say, Shaw will be eligible to play for the Bears in 2020.  Just as obviously, this will be his final season of eligibility.

Grateful for this opportunity! #GOBEARS pic.twitter.com/fO4sKm2Rxp

One final academic postscript: Shaw earned two degrees from the University of Wisconsin.  As for athletically?

Shaw came to the Wisconsin Badgers football team as a three-star 2015 signee.  He was rated as the No. 16 player regardless of position in the state of Alabama.  The back took a redshirt as a true freshman, then missed the entire 2018 season because of a knee injury.  All of that helped lead to the sixth season.

In 2016, Shaw was third on the Badgers in rushing with 457 yards and tied for second in rushing touchdowns with five.  The following season, his 365 yards and four scores were both second behind Jonathan Taylor‘s 1,977 and 13 as a true freshman.

Coming off the knee injury, Shaw ran for 116 yards and a touchdown on 18 carries in 2019.  All told, Shaw carried the ball 202 times for 938 yards and 10 touchdowns during his time with the Badgers.

Shaw’s initial social-media announcement came exactly three weeks after Taylor confirmed he will be leaving UW early for the 2020 NFL Draft.  With the departures of Taylor and Shaw, the Badgers’ leading returning rushers in 2020 will be freshman Nakia Watson (331 yards) and junior Garrett Groshek (194).  UW also has a commitment from four-star 2020 running back Jalen Berger.

College Football in Coronavirus Quarantine: On this day in CFT history, including Texas A&M’s president stating that Texas is ‘not relevant to us anymore’ May 31, 2020 8:24 am

College Football in Coronavirus Quarantine: On this day in CFT history, including Jim Tressel resigning as Ohio State’s head coach after being ‘encouraged’ to do so ‘for the good of the program May 30, 2020 8:24 am

Nebraska will allow football players to return to campus for voluntary workouts June 1 May 29, 2020 6:13 pm