If you thought the third-string quarterback who helped propel Ohio State to a three-win postseason run that culminated in a national championship, and who eschewed early entry into the NFL draft, would be the current Heisman front-runner, you’d be wrong.

Instead, it’s his backfield mate Ezekiel Elliott, who Bovada.lv has installed as a 6/1 favorite to win the 2015 Heisman Trophy.  Considering Elliott’s late-season run, his placement as the front-runner is hardly a surprise.

Over the last three games, which included wins in the Big Ten championship game and the College Football Playoff semifinal and championship games, Elliott, just a sophomore, carried the ball 76 times for 696 yards and eight touchdowns.  That’s more rushing yardage than Wake Forest (479) and Washington State (478) totaled the entire season.  His eight rushing touchdowns in that three-game span were more than Wake (four), Wazzu (five) and Kent State (six) had in 12 games in 2014.

The last running back to win the Heisman was Alabama’s Mark Ingram in 2009.

As for the player alluded to in the lede?  Cardale Jones is at 14/1, tied with a pair of running backs — Alabama’s Derrick Henry, Oklahoma’s Samaje Perine — and behind seven other players.  Right behind Jones are the other parts to OSU’s upcoming three-headed quarterback battle: J.T. Barrett at 16/1, Braxton Miller at 18/1.

Getting back toward the top, a pair of SEC players are right on Elliott’s heels, with Mississippi State quarterback Dak Prescott, a midseason Heisman favorite last year before fading, and LSU freshman running back sensation Leonard Fournette at 7/1.  TCU quarterback Trevone Boykin is not far behind the top three at 15/2.

There are no finalists for the 2014 version of the award on the initial 2015 odds list as all three — Oregon quarterback Marcus Mariota, Wisconsin running back Melvin Gordon, Alabama wide receiver Amari Cooper — all left early for the NFL.

Below are the complete set of 2015 Heisman Trophy odds, again courtesy of Bovada.lv: 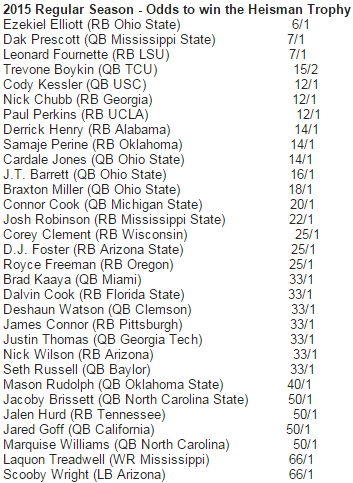 The lone hole on Mike Locksley‘s Maryland Terrapins football staff has been filled.

Helow spent the past four seasons at Colorado State.  The first two were as a defensive quality control coach and graduate assistant.  The last two were spent as safeties coach.

The 2018-19 seasons were Helow’s first as an on-field assistant at the collegiate level.

In addition to the Mountain West Conference school, he has also been a football staffer at:

Helow played his college football at Ole Miss from 2006-10.  Most of his action during his 38 games played came on special teams.

The Hawaii Rainbow Warriors football program has afforded a wayward coach a means to return to the sidelines.

In the days after Nick Rolovich left to replace Mike Leach at Washington State, Robert Anae‘s name had been mentioned prominently as a potential successor.  Tuesday, however, the Virginia offensive coordinator announced in a statement that he has withdrawn his name from consideration for the job as the Hawaii Rainbow Warriors football head coach.

Just prior to that, it was reported by The Athletic‘s Bruce Feldman that Todd Graham is getting consideration for the job.  Very late Tuesday night, Hawaii confirmed that Graham has been hired as the school’s 24th head coach.

Graham will be introduced at a Wednesday afternoon press conference.

The 55-year-old Graham has been a head coach at four different FBS schools:

Graham has posted a 95-61 record at those stops.  His teams have played in 10 bowl games in 12 seasons, winning five of those postseason appearances.  He’s also won three divisional titles.

After being fired by Arizona State in November of 2017, Graham has been out of coaching.  He was mentioned as a candidate for the Kansas job that ultimately went to Les Miles.

“We’re thrilled to have Coach Frey join our staff,” Cutcliffe said in a statement. “It isn’t often you have the opportunity to add an individual who, within the landscape of college football, played at the highest level, has coached at the highest level and comes with 20-plus years of experience on the sideline. Coach Frey’s coaching and mentoring abilities are inspiring, and he will have an immediate and positive impact on the young men in our program. We look forward to welcoming Greg, his wife Andrea and children into our football family.”

In 2017, Frey was the tackles/tight end coach as well as running-game coordinator at Michigan. Frey comes to Duke after a one-season stint (2019) at Florida as a quality control analyst.

“As you go through life and build your family and your career, who you surround yourself with becomes very important,” Frey said. “What attracted me so much to Duke University was the faith, the family and the football, as well as the way Coach Cutcliffe runs his program. As we move forward, we want to be at the forefront of building the culture and championship level play that Duke expects. I’m excited to get started and can’t wait to go.”

A talented new addition to the Virginia Tech football roster is officially official.

After playing in the first four games of the 2019 season at Rutgers, Raheem Blackshear, a team captain, opted to sideline himself for the remainder of the campaign in order to preserve a year of eligibility. Three months later, Blackshear indicated on Twitter that he has decided to leave RU and continue his playing career with the Virginia Tech football program.

Two weeks after that social media announcement, the Hokies confirmed via Twitter that the running back is signed, sealed and delivered.

In addition to Virginia Tech, Blackshear had also considered a transfer to Temple.  A return to Rutgers for the back was in play as well.

It’s expected that Blackshear, a redshirt sophomore, will seek a waiver that would allow him to play immediately for the Hokies in 2020. If that appeal is denied, he would be left with one season of eligibility he could use in 2021.

A three-star 2017 signee, Blackshear ran for 238 yards as a true freshman. The next season, he led the Scarlet Knights in rushing with 586 yards.

Blackshear could also be a significant asset in the Hokies’ passing game.

In addition to being the leading rusher in 2018, Blackshear also led the team in receptions (44), receiving yards (367) and receiving touchdowns (two). Despite playing in just four games this past season, he was second on the Scarlet Knights with 29 receptions (the leader, Bo Melton, ended up with 30) and 310 yards (Melton had 427). His two receiving touchdowns were tied with Melton for the team lead as well.

Mississippi State mourns passing of De’Runnya Wilson, 25, whose death is being investigated as a homicide January 21, 2020 9:00 pm