It appears that, as some had surmised, Jameis Winston may have had an “accomplice” in his shellfish actions of a year ago.

In an incident that occurred a year ago next week, the then-reigning Heisman Trophy winner was issued a citation for shoplifting crab legs from a Tallahassee Publix grocery store.  The $33 seafood caper, which was “caught” on security footage, was explained away by the Florida State quarterback as merely a fit of forgetfulness, although it did cost him a brief suspension from the Seminole baseball team.

Which brings us to today and ESPN’s “Draft Academy.”

In the piece (video below), Winston, widely expected to be the No. 1 overall pick in the upcoming draft, was grilled by his good pre-draft buddy and Michigan head coach Jim Harbaugh, as well as UM’s quarterbacks coach Jedd Fisch, in a practice interview session on how to answer questions regarding perceived character issues.  One of those issues was the crab incident, with Harbaugh telling Winston he wanted him to be completely honest — “I screwed up, I f****d up,” Harbaugh’s advice was at one point — and “serious as a heart attack” in not covering up the seafood issue with NFL teams. 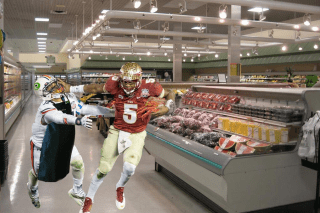 “How am I supposed to handle, like, if I just got it for free,” Winston began. “Do I just say I messed up?”

“A week before is my buddy’s birthday,” Winston continued after he’s was pressed by Harbaugh to explain the “free” angle of the situation, “and we had got a cake and met a dude that [worked] inside Publix and he said ‘hey, anytime you come in here, I got you.’ So that day, we just walked out and he hooked us up with that [the birthday cake].

“And [then] when I came in to get crab legs, I did the same thing and he just gave them to me and I walked out.  And someone from inside the store had told the security that I didn’t pay for ’em and that’s how the whole thing started.”

Harbaugh’s advice to Winston on how to explain the situation to prospective football employers?

And there you have it.  Case closed, thanks in large part to Detective Harbaugh.  Hope y’all sleep a little better tonight knowing the truth.