One of the most prestigious awards in college football became the latest to toss its hat into the preseason watch list ring, and this particular honor carries a decidedly Ohio State tinge to it.

The Maxwell Award, given annually to the nation’s Player of the Year, released a preseason watch list Tuesday that included a total of 80 FBS players.  Among those 80 players are four Ohio State Buckeyes, including all three quarterbacks (in alphabetical order so as not to offend anyone): J.T. Barrett, Cardale Jones and Braxton Miller.

The fourth Buckeye on the initial Maxwell watch list is Ezekiel Elliott.  The preseason Heisman favorite according to one wagering outfit, Elliott will enter the 2015 season coming off a postseason that saw him run for 696 yards and eight touchdowns in postseason wins over Wisconsin (220 yards, Big Ten championship game), Alabama (230, College Football Playoff semifinal) and Oregon (246, CFP championship game).

Mississippi State quarterback Dak Prescott is the only 2014 finalist to make the preseason cut this year.  There are also four 2014 semifinalists on the initial list: Florida State quarterback Everett Golson, who made it last year while at Notre Dame, TCU quarterback Trevone Boykin, Pittsburgh running back James Conner and Michigan State quarterback Connor Cook.

The SEC led all conferences with 17 players listed — Vanderbilt was the only one of the 14 schools without a representative — followed by the Big Ten (12) and ACC and Pac-12 (11 each). The Big 12, with nine, had the fewest amongst Power Five leagues, while the AAC’s five were the most of the Group of Five conferences. 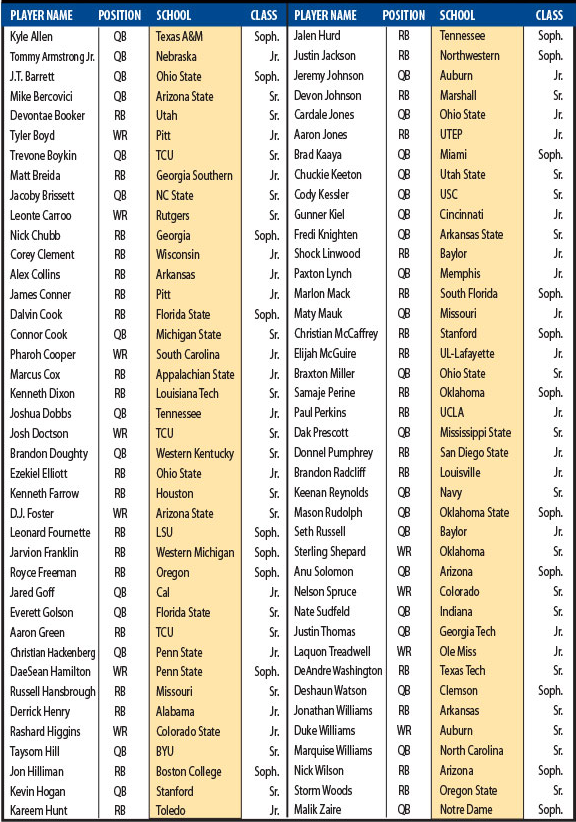