When Bovada.lv released its odds in May on who will win the 2015 Heisman Trophy — and even the previous release in January — Ohio State’s Ezekiel Elliott was the favorite.  In the most recent release, in early July, TCU quarterback Trevone Boykin had surpassed the OSU running back as the wagering favorite.

A month later, the two players are intertwined.

In the latest set of odds released by the popular sportsbook, Boykin and Elliott ar e the co-favorites at 5/1 to claim the 2015 Heisman Trophy.  Both of those odds are shorter, with the former having been at 6/1 and the latter 7/1.

Two of Elliott’s teammates, quarterbacks J.T. Barrett and Cardale Jones, are listed at 9/1 and 12/1, respectively, as they wage a battle for the starting job.  Barrett and Jones had been expected to be involved in a three-man quarterback competition with Braxton Miller, who instead, because his surgically-repaired throwing shoulder is still not 100 percent, opted to move to wide receiver/H-back.  Even with that move, the senior is part of the odds at 33/1.

Perhaps because of a miss-an-extended-period-of-time injury that turned into a season-ending one for Arkansas running back Jonathan Williams, teammate and fellow back Alex Collins has gone from off the board to 33/1, ahead of the likes of Pittsburgh running back James Connor (50/1), Miami quarterback Brad Kaaya (66/1) and Arizona linebacker Scooby Wright (100/1).

The only player taken off the board this time around?  Florida State running back Dalvin Cook, whose future with the Seminoles remains uncertain.

Below are the complete set of odds, again provided by Bovada.lv. 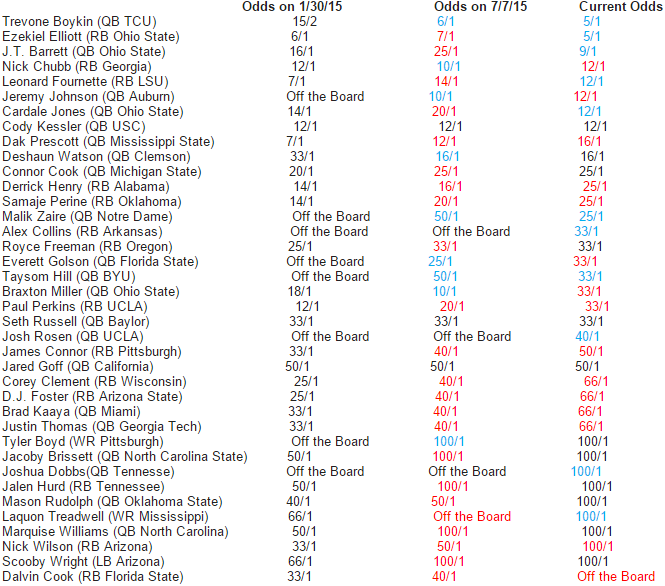 LSU students who got to skip class for the national title game (and the ensuing celebrations…) were hit with a dose of reality returning to Baton Rouge on Friday.

According to an announcement from the university, classes that were cancelled on Monday and Tuesday for the championship game have been rescheduled. As a result, students will have to go to class on Saturday, Jan. 25 and Saturday, Feb. 8.

So yes, Saturdays in the fall have resulted in a few Saturdays of work in the spring.

The school had received a bit of criticism when it was announced that classes were cancelled on the dates surrounding the championship game. While the practice has happened elsewhere, the nature of the game being less than an hour from campus in New Orleans certainly made things unique for the Tigers and their large fan base.

While some students no doubt had hoped that the classes at the time were indeed cancelled, it turns out they were in fact just being rescheduled. Going to school on a Saturday probably isn’t what many had in mind when signing up for the spring semester but there’s probably not a soul in purple and gold will take issue with the change given that it comes as a result of hoisting the ultimate football trophy on Monday night in the Big Easy.

The transfer portal has claimed another name.

As first noted by ESPN’s Adam Rittenberg, Virginia safety Chris Moore has entered his name into the database as he explores a move out of Charlottesville.

Moore started five of his nine appearances for the Cavaliers in 2019 and wound up recording 42 tackles. While he was in line to become one of the key members in the secondary going forward, a prior  suspension for violating team rules back in November may have wound up playing a role in his departure and standing with the team.

The safety had previously missed all of the 2018 season with an injury as well.

Moore was originally a three-star recruit out of Ashburn, Va. in 2016 and, assuming the redshirt senior has a degree, likely has a season remaining as a grad transfer.

Clay Helton has a lot of issues to deal with at the moment. Having a talented USC football team is not one of them.

The Trojans received a rare bit of good news on Thursday evening as two key players announced they were skipping the 2020 NFL Draft. In back-to-back announcements, defensive lineman Jay Tufele and wideout Tyler Vaughns confirmed they would remain in Los Angeles for the 2020 season.

All glory to god pic.twitter.com/Wr4r28pRYh

Tufele is one of USC’s best defensive players. He recorded 42 tackles and 4.5 sacks last season as a redshirt sophomore despite dealing with a handful of injuries. With leading sacker Drake Jackson also back, there’s a nice tandem up front for whoever the team hires as defensive coordinator to work with going forward.

Vaughns returning also makes a dangerous receiving corps that much deeper. Michael Pittman Jr. was lost to graduation but the next three top wideouts are set to be back in 2020. Add in a group of solid tailbacks and both J.T. Daniels and Kedon Slovis at QB and USC will once again have one of the top offenses in the Pac-12.

Whether it will all help save Helton’s job again remains to be seen. If nothing else though, there’s at least there’s some positive news for the cardinal and gold this offseason with Tufele and Vaughns back in the fold going forward.

A year after significantly falling short of expectations, an offseason of change has commenced at Nebraska.

In one of the first big moves since Scott Frost took over at his alma mater, the Cornhuskers and offensive coordinator Troy Walters announced on Friday that they had ‘mutually agreed to part ways.’

“Troy has been a valued member of our coaching staff for the past four years,” Frost said in a statement. “Troy is a good mentor for his players, provides great energy on and off the field, and carries himself with a presence off the field that will be missed. I want to thank him for his work on our coaching staff, and wish him and his family all the best going forward.”

The duo first came together when Frost was hired at UCF and led a number of prolific offenses, including the undefeated 2017 team for the Knights. Walters was a finalist for the Broyles Award that same season though has not called plays for either team.

Walters had a distinguished career as a player at Stanford that included All-American honors and a Biletnikoff Award in 1999. He spent several years in the NFL before going into coaching during stops at Texas A&M, N.C. State and Colorado.

The departure of Walters could interestingly lead to a reunion between Frost and a familiar name in Mark Helfrich. The latter was head coach at Oregon when Frost was elevated to offensive coordinator for the Ducks and is in search of a job after being let go by the Chicago Bears from a similar role.