The honor train keeps rolling down the tracks and throughout the country, with the latest stop coming in the Big 12.

Shortly after the ACC did their thing, the Big 12 did theirs, announcing all of the Player of the Year recipients as well as all-conference teams.  After leading one-loss Oklahoma into the College Football Playoff as a No. 4 seed, Bob Stoops has been named as Coach of the Year.

A big reason for that honor was OU quarterback Baker Mayfield, who was named as the conference’s Offensive Player of the Year.  One more honor came the Sooners’ way as wide receiver Dede Westbrook was named Offensive Newcomer of the Year.

Below are the remaining Players of the Year, followed by the first- and second-team All-Big 12 squads, which was heavy on the Sooners as the conference champs landed nine alone on the first team.  TCU was next with five: 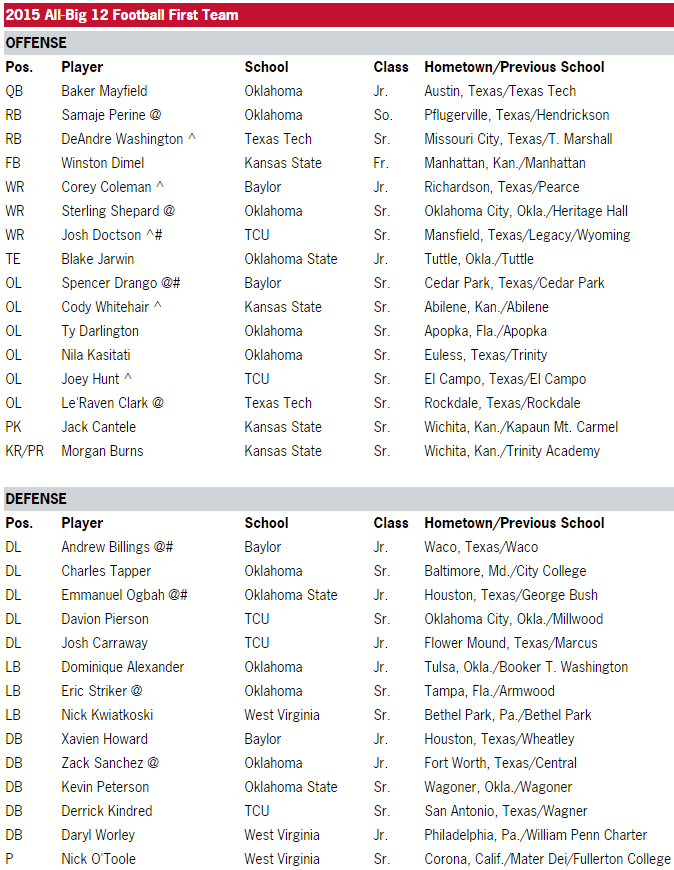 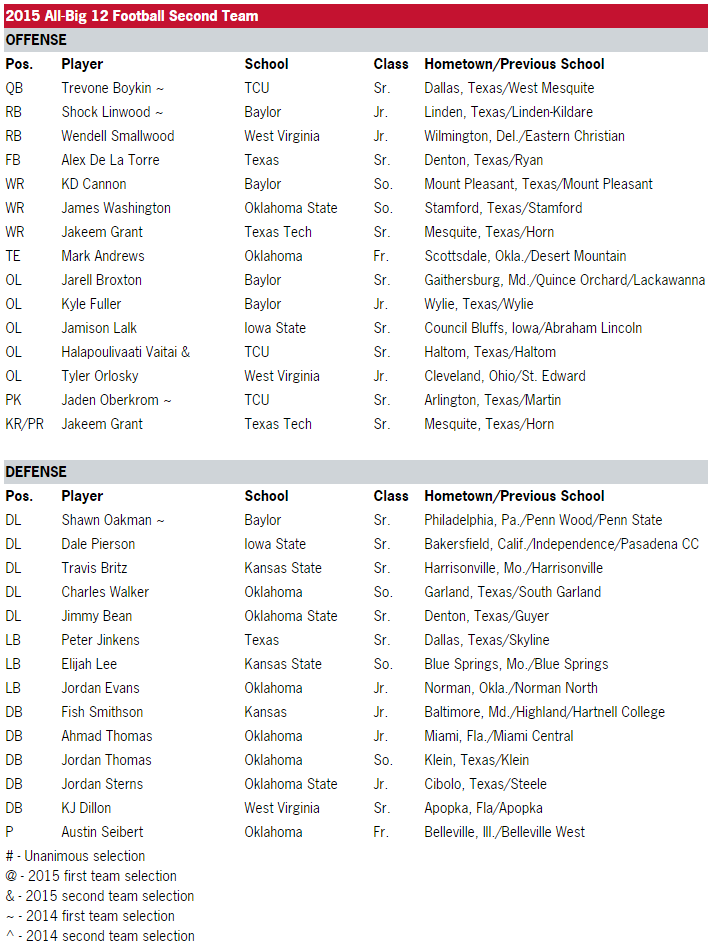 Given his defensive track record, Pelini and LSU could be a solid match, and it has certainly worked out well before. Pelini was LSU’s defensive coordinator from 2005 through 20078 before he was given the opportunity to be a head coach at Nebraska. The Cornhuskers were coached by Pelini from 2008 through 2014 with a handful of appearances in the Big 12 and Big Ten championship game, although with no conference title to show for it.

Pelini was let go as head coach at Nebraska after the 2014 season. He has been the head coach at Youngstown State since 2015. After a few disappointing seasons, a chance to jump back to the FBS, and to do so with the defending national champions, could be a good move for Pelini. If LSU and Pelini see eye-to-eye, then this could be as good a replacement at defensive coordinator as LSU could have asked for.

LSU has a vacancy at defensive coordinator after Dave Arranda accepted an opportunity to be the new head coach at Baylor following LSU’s national championship run.

New Rutgers head coach Greg Schiano has been tapping the transfer portal to help build the roster in his first year back with the Scarlet Knights. On Monday, Rutgers added another Big Ten transfer to the program with the addition of defensive tackle Michael Dwumfour. Dwumfour transfers to Rutgers from Michigan.

Dwumfour will be a graduate transfer, so he will be eligible right away for Rutgers this upcoming season. Dwumfour played 33 games for the Wolverines, including 10 game sin 2019 with four starts. He will provide an instant upgrade to the Rutgers defensive line depth and should be thrown right into the mix for a starting job this fall.

Notably, Dwumfour is a New Jersey native. Schiano’s hiring at Rutgers has certainly had a bit of an initial impact in luring some of the state’s and regional recruits on the transfer market. Earlier this month, Rutgers welcomed Brooklyn, New York product and former Wisconsin wide receiver Aron Cruickshank (HERE).

A day later, D’Eriq King is officially committed to the Miami Hurricanes. King brought his transfer process to a close on Monday afternoon with an announcement he is indeed committed to Miami. King shared the news with his followers on Twitter.

On Sunday, it was initially reported by Manny Navarro of The Athletic that King was scheduled to enroll and begin classes at Miami this week. Classes at Miami begin Tuesday. However, a quote of King relayed by a Houston-based media report shortly afterward quoted King as saying he had made no final decision and was still weighing some possible options. Other options were said to include Arkansas, LSU, and Maryland.

Miami was reported early on as a possible landing spot for King, along with Arkansas. Ole Miss had also been mentioned as an option early on. King initially started his transfer process by opting to redshirt the remainder of the 2019 season after a rough start to the year for the Cougars. He said at the time he had every intent on returning to the program in 2020, but his sudden announcement during the national championship game last week made it evident he was moving on. And now, of course, he has.

King appeared in just four games for Houston last season. In those four games, King passed for 663 yards and six touchdowns with two interceptions. The dual-threat quarterback also rushed for 313 yards and six touchdowns before redshirting the remainder of the 2019 season. In 11 game sin 2018, King passed for 2,982 yards and 36 touchdowns and rushed for 674 yards and 14 touchdowns. King is certainly a quality talent that will add to the Miami offense and inject some new life into the program. With the right help around him, King could help make Miami an ACC Coastal contender in 2020.

King will be eligible for Miami in 2020 as a graduate transfer.

Maryland running back Lorenzo Harrison III announced he is medically retiring from football. In a statement shared on his Twitter account on Monday afternoon, Harrison cited his history with knee trouble as a reason he is stepping away from playing football moving forward.

“[During] the last game I competed in, I suffered a severe knee injury,” Harrison explained. “Due to those circumstances which are far out of my control, I believe it is in my best interest to convert my focus from ball to the next great thing God has in store for me. With that being said, I am medically retiring from the game that has given me everything I could ever ask for.”

The last game Harrison played was on Sept. 27, 2019 at home against Penn State. In Maryland’s 59-0 loss to the Nittany Lions, Harrison had one rushing attempt for an eight-yard gain. It is in that game Harrison says his knee injury was suffered.

Harrison’s final two seasons in a Maryland uniform saw injuries get in the way of keeping him on the field and a part of the offense. Harrison rushed for 633 yards in 2017 and 622 yards in 2018 before being held to just 84 yards in 2018 and 70 yards in 2019 in a combined total of five games the last two years.