The Greatest is gone, but he’s certainly not forgotten.

Diagnosed with Parkinson’s in 1984, Muhammad Ali lost his fight against the debilitating disease late Friday night at the age of 74. From boxer to entertainer to human rights activist to so much more, the Louisville native is being remembered across all sports genres, all entertainment genres for transcending the boxing ring — and every other venue he graced, for that matter.

Among those pausing to remember the transcendent icon is the flagship university of his (eventually) beloved home city, of which Ali once said, “I’m the greatest fighter of all-time, and Louisville, Kentucky, is the greatest city of all-time.” 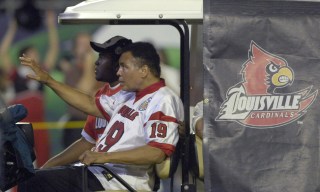 Long a very public and vocal supporter of the University of Louisville, Ali was especially linked to the Cardinals baseball — his son was a UofL baseball player a few years ago — and basketball programs — he was a looming public presence in supporting men’s hoops coach Rick Pitino during the infamous scandal a couple of years ago. Ali, though, was also a supporter of Cardinals football, attending games as recently as 2014 and 2015 at Papa John’s Stadium.

In death, The Greatest’s life is being remembered by the UofL athletics and football community, both present and past.

“All of us in the Cardinal Athletics family are deeply, deeply saddened with the passing of an absolute worldwide legend in Muhammad,” said athletic director Tom Jurich in a statement. “While he was undoubtedly one of the greatest athletes in history, the Champ made a difference in the lives of so many around the world. His generosity with his time for anything we asked of him — or things he offered to do without us asking — was incredible, as was the financial commitment he and Lonnie made to our baseball program at UofL. It was a true honor for me to know him and he will be greatly missed. Our deepest sympathies and prayers go out to Lonnie and the entire family.”

Thanks Champ for what you meant to our football program. You are truly The Greatest #L1C4 pic.twitter.com/hruE0b15HF

RIP Champ. Words can’t describe what you mean to our city. #TheGreatest pic.twitter.com/oDs6RN5XRr

Muhammad Ali was one of the most iconic athletes ever his impact on Louisville & the world will never be forgotten. pic.twitter.com/OwZQTslJbv

#RIPMuhammadAli His charisma and charm touched so many lives. He was an inspiration to us all. #GOAT pic.twitter.com/g9Ss1LL9b7

R.I.P Muhammad Ali (The GOAT)
You Gave Young Black Men Like Myself & Every Athlete In The World… https://t.co/y51kYIeBKr

RIP to the Great Muhammed Ali, I love everything you stood for.

R.I.P to the Greatest #MuhammadAli

Muhammad Ali taught my dad how to talk smack. And I learned from my dad. So blame Muhammad Ali 😅

Today we pause to remember the world’s greatest. #RIPMuhammadAli pic.twitter.com/wdPSY31g89

Very sad to hear of the passing of Muhammad Ali. I was fortunate to spend some great times with The Greatest in Louisville. #RIPChamp

Statement from #Louisville basketball coach Rick Pitino on the death of @MuhammadAli pic.twitter.com/IgiiQNkCqd

Less than a year into his job, the Florida State head football coach is the latest to be impacted by the coronavirus pandemic.

This past week, FSU announced a series of cost-saving measures within the athletic department.  Included in that is Mike Norvell, the new Florida State football coach who will take a 25-percent cut in his salary for the fiscal year.  Other coaches for the Seminoles, including men’s and women’s basketball, will take 15-percent cuts.  Athletic director David Coburn will see his salary reduced by 20 percent.

Additionally, 25 full-time jobs within the athletic department are being eliminated.  Overall, that department’s budget will be slashed by 20 percent.

”I am personally heartbroken over the impact this pandemic has had on our employees, and I am disappointed I must give you this discouraging news today,” Coburn said in a portion of his statement. “However, I am sure you have seen that other athletic departments around the country  are also making reductions.”

On that front, the FSU athletic director is absolutely correct.

Below is a partial list of FBS programs that have initiated various cost-cutting measures for athletic department personnel, including coaches:

Additionally, Pac-12 commissioner Larry Scott, who reportedly made north of $5 million a year ago, is taking a 20% pay cut.  Scott’s Big 12 counterpart, Bob Bowlsby, announced pay cuts for himself and the conference’s staff.

So, without further ado — ok, one further ado — here’s what happened in college football on July 12, by way of our team of CFT writers both past and present.

THE HEADLINE: FCS player paralyzed vs. Georgia moves into wheelchair-accessible home
THE SYNOPSIS: All things considered, the Devon Gales saga, one four years in the making, was one of the feel-good stories of last offseason.

THE HEADLINE: Report: Paul Finebaum to sign new contract with ESPN
THE SYNOPSIS: Two years later, the College Football Mouth of the South could see his life played out in a television sitcom.  Seriously.

THE HEADLINE: Kevin Sumlin downplays hot seat in College Station: “I’m feeling the same pressure I feel all of the time”
THE SYNOPSIS: Four months later, Sumlin was kicked to the curb by the Aggies.  Now the head coach at Arizona, Sumlin finished 51-26 with the Aggies in the hyper-competitive SEC West.

THE HEADLINE: Court documents: 14-year-old boy told Joe Paterno of sexual abuse in 1976
THE SYNOPSIS: “I wish I had done more.” JoePa’s own words in the wake of the Jerry Sandusky child rape scandal.  That was our lede for this post then.  And those words, even now, should never, ever be forgotten when it comes to discussing the Penn State head coach’s legacy.

THE HEADLINE: FSU’s Dalvin Cook cited last year for chaining three puppies together
THE SYNOPSIS: It was a bad few days for Cook specifically and Florida State in general.  In addition to abhorrent puppy abuse, Cook was alleged to have punched a woman in the face at a bar. In a different incident in a different bar, teammate and quarterback Deandre Johnson was dismissed after punching a different woman in the face.  Cook was ultimately found not guilty by a jury in his bar incident.

THE HEADLINE: Freeh Report investigating Penn State’s actions in Jerry Sandusky case released
THE SYNOPSIS: The family of Joe Paterno accepted criticism of the late coach in the report.  The university stated that they are “giving the report careful scrutiny and consideration before making any announcements or recommendations.” As we said above: “I wish I had done more.”

THE HEADLINE: Man takes part in ‘O-H-I-O’ — from his casket
THE SYNOPSIS: My family is overflowing with diehard Ohio State fans.  This is their favorite O-H-I-O ever.  Still.  And there are standing orders to perform one as part of their funerals.

College Football in Coronavirus Quarantine: On this day in CFT history, including the family of Joe Paterno, Penn State reacting to the release of the Freeh report July 12, 2020 8:24 am