Nearly a month before the 2017 season kicks off in earnest, the first noteworthy of the meaningless preseason polls has been released.

With USA Today as its delivery vehicle, the Amway Coaches’ Poll released its initial ranking of the Top 25 teams in the country.  Not surprisingly, to some, 2016 national runner-up Alabama is ranked as the top team in the country.

Of the 65 “coaches” (winkwinknudgenudge) who participated in the voting, 49 of them cast their first-place votes for ‘Bama.  The Nos. 2 and 3 teams in the country, Ohio State and Florida State, respectively, received five and four first-place votes, respectively.  The only other team that received No. 1 nods was fifth-ranked and defending national champion Clemson with seven.

While there were four Big Ten teams in the Top 10, just one team from the SEC can make the same claim.  Overall, though, the latter conference lead all leagues with six teams in the Top 25, followed by the ACC and Big 12 with five each and the Big Ten and Pac-12 with four apiece.  The Group of Five program to crack the initial ranking was South Florida, with the AAC school coming in at No. 21.

For those who are curious, and before we get to the complete Top 25 rankings, below are the “coaches” (winkwinknudgenudge) who will vote in this particular poll throughout the 2017 season: 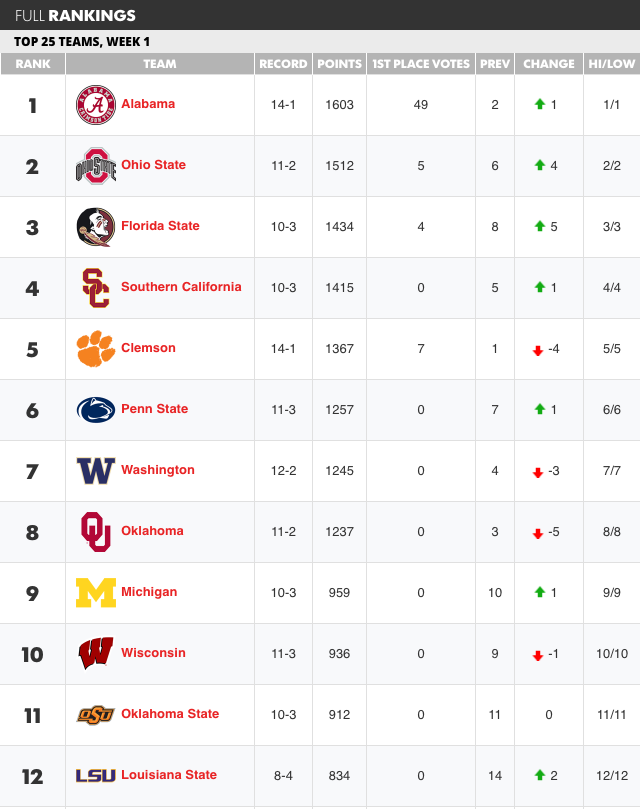 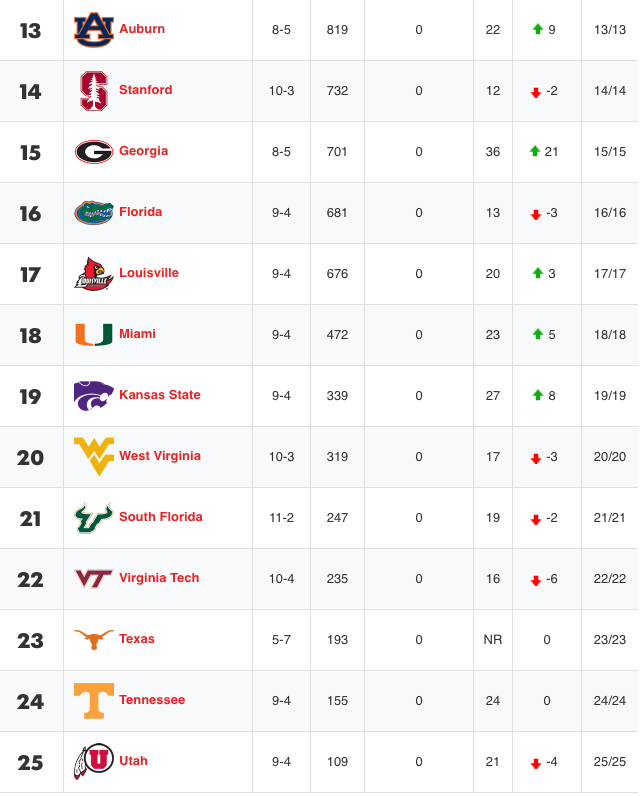 From 1999-2008, Danny Gonzales worked on Rocky Long‘s staff at New Mexico. Now, the shoe is on the other foot.

“Look who’s back on the sideline together!!!” Gonzales tweeted. “Welcome back Coach Long DC /Linebackers Best DC in CFB!!! Let’s Do This! The goal is Conference Championship #5 Lets Gooooooo!”

The hiring concludes a strange saga for the 70-year-old Long (today is actually his birthday), who was rumored to interview for the Syracuse defensive coordinator job that later went to his own defensive coordinator in Zach Arnett. (Incidentally, Arnett has since left that job.) Two days later, on Jan. 8, Long stepped down as San Diego State’s head coach, a move the school termed as a retirement.

And now he’s back for his sixth tour of duty in Lobo colors.

Long first played defensive back at New Mexico from 1969-71, then joined the staff as a graduate assistant in 1972 while playing semi-professionally in Canada. After a stint at a New Mexico high school, he returned to UNM as a position coach in 1978, first coaching offensive backs before switching to defensive backs. After climbing the ladder as a coordinator, Long obtained his first head coaching job at New Mexico in 1998, going 65-69 with five bowl appearances in 11 seasons. He then went 81-38 with three Mountain West titles and at least a share of two division crowns from 2011-19.

Look who's back on the sideline together!!! Welcome back Coach Long DC /Linebackers Best DC in CFB!!! Let's Do This! The goal is Conference Championship #5 Lets Gooooooo! #GoLobos #WIN5 pic.twitter.com/dS27ri8D7j

Even as the Rutgers football program adds transfers, Greg Schiano‘s new squad is losing them through the same process.

Both Jabbie and Maietti will be leaving the Scarlet Knights as graduate transfers.  The loss of the latter, though, will likely leave the biggest mark.

The past three seasons, Maietti has started 33 games at center for the Scarlet Knights.  The New Jersey native earned Academic All-Big Ten honors each of the last three seasons.

Appearing in 27 games, Jabbie started 12 of those contests.

This past season, Jabbie set career-highs in catches (14), receiving yards (149) and receiving touchdowns (one).  He will apparently finish his Rutgers football career with 182 yards and a touchdown on 18 receptions.

Thanks to a Nebraska football player, we won’t have to go through an entire day without a portal post.  Hurray?

Late this past week, Tony Butler announced in a very classy, heartfelt post on Twitter that he will be entering the NCAA transfer database.  The move would serve as the first step in a departure from the Nebraska football program.

The cornerback could also return to the Nebraska football team if he so desires.

That said, Butler would be leaving the Cornhuskers as a graduate transfer.  The 2020 season will be his final year of collegiate eligibility.

“In 2016, I came here as an 18-year-old kid lost and looking for a home.  Nebraska, you became my home and brought me in with open arms,” Butler wrote. “This place became very special. …

“Nebraska, you have done an incredible job at helping a lost boy become a man.  My family and I are forever grateful for this opportunity.”

A three-star 2016 signee, Butler was rated as the No. 22 player regardless of position in the state of Ohio.  He took a redshirt as a true freshman.

The past three seasons, Butler played in 27 games.  Four of those appearances came in 2019, which was likely the trigger for the decision to transfer.  Most of the games played came on special teams.

Butler is the third player to leave the Nebraska football program in a week.

Linebacker Pernell Jefferson, a three-star 2016 signee, entered the portal Wednesday.  Days before that, offensive lineman John Raridon decided to retire from football to pursue a career in architecture.

The Florida Gators football program is the latest to benefit from Ye Olde Transfer Portal.

In late November, Justin Shorter took the initial step in transferring from Penn State by entering the NCAA database.  Two months to the day later, the wide receiver took to Twitter to announce that he has committed to continuing his collegiate playing career as part of the Florida Gators football team.

As of yet, UF has not announced Shorter’s addition to the roster.

A five-star member of the Nittany Lions’ 2018 recruiting class, Shorter was rated as the No. 1 receiver in the country; the No. 1 player at any position in the state of New Jersey; and the No. 8 recruit overall on 247Sports.com‘s composite board.  Only defensive end Micah Parsons was rated higher than Shorter in Franklin’s class that year.

Barring the unexpected, Shorter will have to sit out the 2020 season to satisfy NCAA transfer bylaws.  He would then have two seasons of eligibility beginning in 2021.

Georgia state rep. proposes pay-for-play legislation with a twist that will make no one happy January 26, 2020 5:06 pm