The Big 12 is the most quarterback-driven of all QB-driven leagues, and 2018 represents a major changing of the guard. Gone is Heisman Trophy winner and No. 1 pick Baker Mayfield, and so, too, are Oklahoma State’s Mason Rudolph, TCU’s Kenny Hill, Texas Tech’s Nic Shimonek and Kansas State’s Jesse Ertz. West Virginia returns Heisman candidate Will Grier, but the next-highest returning passer is Texas’s Sam Ehlinger, who threw for all of 1,915 yards as a true freshman in 2017. This is going to be a wide-open year and, as such, a year where the unpredictable will reign supreme over the predictable. It’s an off-year in the Big 12’s your turn/my turn College Football Playoff rotation with the Pac-12, and a year where a young, ascendant team (Baylor?) is likely to rise up and wreck the season of a favored team who is among the best in the land (Oklahoma? West Virginia? TCU?) who’s wobbly from the most difficult week-to-week grind in college football. (Don’t @ me.)

Oklahoma enters as the prohibitive favorite, but the Sooners lose a lot of production from 2017. You know about Mayfield, but Lincoln Riley also loses All-American pass rusher Obo Okoronkwo, All-American left tackle Orlando Brown and All-American tight end Mark Andrews, as well as Swiss army knife fullback Dimitri Flowers. Kyler Murray will add an extra dimension to Oklahoma’s running game, but can a 5-foot-9 quarterback sit back in the pocket and pick people apart when necessary?

West Virginia enters as OU’s top challenger, and the combination of Grier, Gary Jennings (97 catches for 1,096 yards in 2017) and David Sills (60 grabs for 980 yards and 18 touchdowns) is easily the conference’s most fearsome passing attack. Dana Holgorsen thinks his team finally has the defense and the depth to survive the year-long grind of the Big 12, but he seemingly says that every year. Making four cross-country trips a year is a unique challenge that any program would struggle to solve, though WVU does get Oklahoma and TCU in Morgantown. TCU replaces Hill with Gary Patterson‘s highest-regarded quarterback recruit ever in sophomore Shawn Robinson. He should team with KaVontae Turpin and Jalen Reagor to give the Frogs plenty of sizzle, and TCU’s front seven is probably the scariest in the league, but the Frogs’ four new offensive line starters will have to grow up in a hurry.

Texas has a lot to like on an individual level, but skepticism is warranted until the quarterback position is sorted out. This is a league where 40 touchdowns responsible for from your starting quarterback is a prerequisite for winning the conference title, and Ehlinger and Shane Buechele combined for 22 in 2017. Oklahoma State won’t be as good as they were last year after losing Rudolph and James Washington but will still be much better than you assume they’ll be, which is exactly how Mike Gundy prefers it. Iowa State will be just good enough to ruin your season but not good enough to seriously contend for the league title. Texas Tech enters the year with more question marks on offense than defense for the first time since the 19th century, which could be considered a very good sign considering Kliff Kingsbury will never field a bad offense. Baylor was much better than last year’s 1-11 record, and Matt Rhule‘s 17 returning starters, led by sophomore quarterback Charlie Brewer, means this will be the league’s most improved team — and perhaps the country’s. Kansas State will be about as pleasant to play as a root canal, and junior quarterback Alex Delton will again be a nightmare to contain. David Beaty returns 19 starters and enters a last-chance season to show marked progress with new AD Jeff Long watching.

Before we get to the predictions, consider that the Big 12 is annually a league where the gap between No. 3 and No. 8 is small enough to slip a notecard through, and especially so this year. 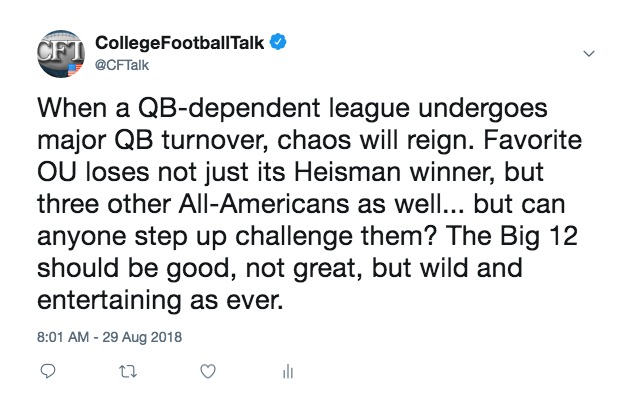 After a slow start, Alabama continues to make inroads on the football recruiting trail.  Significant inroads.

Monday, four-star defensive back Devonta Smith, a one-time Ohio State commit, committed to Alabama football.  Two days later, four-star defensive end Dallas Turner did the same.  The Florida high schooler, who had Florida, Georgia, Michigan and Oklahoma as part of his Final Five, gave his verbal in a video.

Turner had taken a visit to Tuscaloosa back in February.  That trip seemed to clinch the deal for the Crimson ide.

“I knew after the visit,” Turner said. “I just liked the amount of history at the school and how productive the school is and the high standards that they have for their players. …

“I trust [the Alabama football] program the most. I feel like they want me to be the best version of me.”

Turner is rated as the No. 2 weakside defensive end on the 247Sports.com composite.  The Fort Lauderdale high schooler is the No. 10 recruit regardless of position in the Sunshine State.  He’s also the No. 44 prospect overall on that same composite.

The two commitments continue a significant uptick in recruiting success for the Crimson Tide.

Here’s to guessing, though, that the Tide is not finished on the recruiting trail.  Far from it, in fact.

There is history behind such confidence, of course.  Just once since Nick Saban took over has Alabama finished outside the Top Five in recruiting.  That was the 2007 class, signed in February of that year.  One month after Saban was hired.

Go ahead and add the Oklahoma football coach as taking one for the team.  Or school, as the case may be.

Wednesday, Oklahoma announced that, with the start of the 2020-21 fiscal year, the athletic department is initiating cost-cutting measures that will help slash “approximately $13.7 million in controllable operating expenses.” Included in that is a 10% salary reduction for any university employee earning a salary of $1 million or more per year.  Oklahoma head football coach Lincoln Riley, of course, is part of that group.

Last year, Riley was paid nearly $6.4 million, a figure that was second in the Big 12 and ninth nationally.  With a 10% reduction, Riley would forego in the neighborhood of $640,000.

From the school’s release:

All of us understand that a number of circumstances will unfold in the weeks ahead,” he said. “Our staff continues to monitor our expense and income projections closely and we’ll take other actions, as necessary.”

Castiglione added that he was pleased that the department was able to balance its budget for the 2019-20 fiscal year.

“It’s a testament to our staff and our practices that we were able to balance our budget for fiscal year 2020,” Castiglione said. “We have always benefited from excellent teamwork in our department, but our staff has come together as never before. I am very proud of our people.

Below is a partial list of FBS programs that have initiated various cost-cutting measures for athletic department personnel, including coaches:

Additionally, Pac-12 commissioner Larry Scott, who reportedly made north of $5 million a year ago, is taking a 20% pay cut.  Scott’s Big 12 counterpart, Bob Bowlsby, announced pay cuts for himself and the conference’s staff.

So, without further ado — ok, one further ado — here’s what happened in college football on July 2, by way of our team of CFT writers both past and present.

THE HEADLINE: Report: James Madison interested in moving up to FBS to take UConn’s spot in AAC
THE SYNOPSIS: Thus far, no school has taken UConn’s place in the conference.  The league seems content moving forward with 11 football-playing members.

THE HEADLINE: Braxton Miller to reveal plans for future next week
THE SYNOPSIS: Hmmm, wonder what the Ohio State quarterback will do?  Stay tuned…

THE HEADLINE: Randy “Captain Obvious” Edsall: We’re not going to be Ohio State, Michigan or Penn State
THE SYNOPSIS: That was when Edsall was the boss at Maryland.  Edsall lasted one-and-a-half more seasons at the school.  The Terrapins went 22-34 under the current UConn head coach, including a 2-4 start to the 2015 season that triggered his midseason dismissal.  Mike Locksley was named interim coach.  Three years later, Lockley was back as the full-time head coach.

THE HEADLINE: Paterno family condemns ‘leaking of selective emails’
THE SYNOPSIS: This development, which came a week after Jerry Sandusky became a convicted pedophile, continued to erode Joe Paterno‘s legacy.

THE HEADLINE: UGA-ly: Bad situation gets really uncomfortable for AD Damon Evans
THE SYNOPSIS: What made it so uncomfortable? During a traffic stop, a state trooper detected a  pair of red panties situated between Evans’ legs.  In the vehicle with the married Evans was a female who was not his wife. Three days later, Evans resigned. Eight years later, Evans was named as the athletic director at Maryland.

It didn’t take long for one erstwhile Florida State football player to find a new home.  On a lower rung of the sport, but still.

It was reported last week that Anthony Grant is no longer a member of the Florida State football team.  In fact, Grant is no longer listed on FSU’s official roster.  It’s unclear at this point whether the parting of ways was mutual or one-sided.

Then again, that doesn’t much matter as the running back has reportedly opted to start over at Garden City Community College.  The news of the JUCO move was first reported late last week.

It’s expected that Grant will spend the 2020 season at the Kansas junior college, then move back to an FBS school.  That would leave him with two years of eligibility at this level of football starting in 2021.

Grant was a three-star member of the Florida State football Class of 2018.  The Georgia native was rated as the No. 17 running back in the country on the 247Sports.com composite.  He held Power Five offers from nearly two dozen schools, including Florida, Georgia and Tennessee.

In 2019, Grant didn’t see the field at all for the Seminoles.  As a true freshman, Grant played a dozen games.  In that action, he ran five times… for zero yards.  He did, though, lead FSU by averaging 22.5 yards on 11 kick returns.  Additionally, he totaled nine tackles on special teams.

Alabama continues climb up 2021 recruiting rankings with another four-star commit; Crimson Tide now knocking on the door of the Top 10 July 2, 2020 11:22 am

Oklahoma confirms 14 football players have tested positive for COVID-19, with a dozen of those still ‘active’ July 1, 2020 9:03 pm

Memphis loses a pair of defensive players to the transfer portal July 1, 2020 8:42 pm

Utah’s Morgan Scalley will remain as DC, but has salary cut in half and is no longer head coach-in-waiting July 1, 2020 4:20 pm

UConn officially embarks on its journey as a football independent July 1, 2020 7:17 am