A new financial standard has been set for a sport that still can’t find a way to meaningfully compensate the players largely responsible for its success.

Late Friday morning, Clemson announced that it has reached an agreement with head coach Dabo Swinney on a new 10-year, $93 million contract.  The per-year average of $9.3 million is the largest ever for a college football coach.  In July of last year, Alabama gave Nick Saban a revamped eight-year, $74 million contract while Texas A&M will be paying Jimbo Fisher $75 million over the next 10 years; those were the previous contract standard bearers for the sport.

Aside from the sheer magnitude of the dollars involved, arguably the most interesting aspect of the deal is the buyout.  Specifically, language is included that would increase the buyout Swinney, who played his college football at Alabama and has long been rumored as Saban’s eventual successor in Tuscaloosa, would be forced to pay by 50 percent should he leave Clemson for his alma mater. 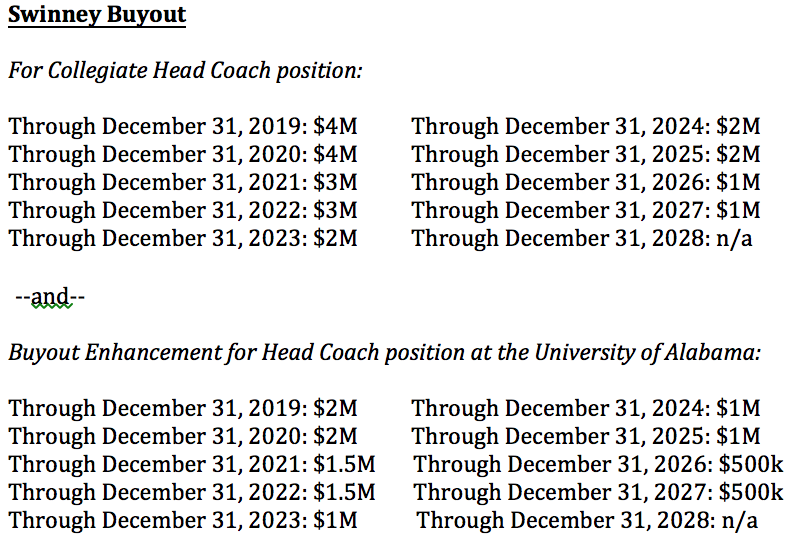 Conversely, the university would owe Swinney $50 million if he’s fired without cause in the first two years of the deal; $47.5 million in Years 3 and 4; $45 million in Year 5; and 100-percent of his remaining compensation through the end of the contract.

Swinney has won 116 games during his nearly 11 full seasons as the Tigers’ head coach, a number that’s second on the school’s all-time list.  Clemson has won two of the last three national championships, with both of those wins coming at the expense of Swinney’s alma mater.

“I am grateful and humbled by the incredible commitment Clemson has made to me, my family and our football program,” Swinney said in a statement. “For more than a decade, we have given our all to provide this world-class university and our incredible fans the championship football program they deserve – to live up to Best is the Standard. With this contract, we make a collective statement that we intend to continue pursuing championships and developing total student-athletes for years to come. Our sustained continuity in vision, people and culture have been a key ingredient to our success, on and off the field. I am thankful for the leadership we have at Clemson and appreciate all they do for Clemson Football. I am truly blessed to be your Head Football Coach.”

Notre Dame and Cal have agreed to a future game to be played in South Bend, Indiana. Cal announced their future road trip on Monday. Notre Dame will host Cal on Sept. 17, 2022.

“We are looking forward to visiting Notre Dame, and I know that many of our fans will, too,” Cal Director of Athletics Jim Knowlton said in a released statement. “Notre Dame Stadium is an iconic venue, and this game provides another opportunity for our alumni to support their Bears on the road. We saw a great turnout for our game at Ole Miss this past season and again at the Redbox Bowl in Santa Clara. I expect we’ll have another large contingent follow us to Notre Dame for this exciting contest.”

This is a one-game agreement rather than a home-and-home arrangement, but it was one Cal was more than happy to make. For Cal, the Golden Bears get a chance to play an opponent other Pac-12 schools have regularly played. Notre Dame plays annual games against Stanford and USC. It is also a good non-conference matchup against a program weighed as a power conference opponent. Although Pac-12 schools are not required to play another FBS opponent in non-conference play (ACC, Big Ten, and SEC scheduling policies ask members to schedule at least one non-conference game each year against another power conference opponent), the addition of the Fighting Irish is a clear upgrade on the schedule for Cal.

Notre Dame still has two vacancies in the 2022 schedule as it currently stands. The Irish will also host Ohio State, Marshall, Stanford, Clemson, and Boston College in 2022. Notre Dame has road games scheduled against Navy, USC, North Carolina and Syracuse in 2022.

Notre Dame and Cal have played just five previous times. The most recent meeting in the series was played in 1967. Notre Dame leads the all-time series 4-0.

Indiana starting quarterback Peyton Ramsey has entered the NCAA transfer portal, according to a report on Monday afternoon.

Ramsey passed for 2,454 yards and 13 touchdowns with five interceptions last season in 11 games. Ramsey also rushed for 252 yards and seven touchdowns in one of the most successful seasons in Indiana’s history since 1993.

With Ramsey likely to be moving out of Bloomington, Indiana’s offense will now be placed in the hands of Michael Penix Jr. Penix played in seven games for the Hoosiers in 2019. He completed 68.8 percent of his pass attempts for 1,394 yards and 10 touchdowns with four interceptions. He also rushed for 119 yards and two touchdowns on 22 rushing attempts. Penix played in just three games in 2018 to preserve a redshirt season. He has three remaining years of eligibility for Indiana.

USC safety C.J. Pollard announced he decided to enter the transfer portal. The redshirt junior posted on his Twitter account Monday morning he will begin evaluating his transfer options with the intent on being a graduate transfer.

“After considerable thought and prayer, I have decided to enter the Transfer Portal as a GRADUATE,” Pollard posted on his social media account.

As a graduate transfer, Pollard will be eligible to play for any other FBS program in the fall, without having to sit out a season. Pollard will have just one final season of eligibility to use this upcoming season.

I would like to say thank you to USC Athletics for giving me the opportunity to compete as a student- athlete and earn a degree from a prestigious private university. After considerable thought and prayer, I have decided to enter the Transfer Portal as a GRADUATE. pic.twitter.com/Vw6x8CJ91I

Pollard appeared in 12 games for USC in 2019 and recorded 15 tackles, with one tackle for a loss. Pollard was listed second on the USC depth chart at the end of the 2019 season. Pollard was the first backup free safety listed behind starter Isaiah Pola-Mao, a redshirt sophomore set to return and (likely) continue being the starter for the Trojans in 2020.

In the past, Oklahoma’s running backs coaches might have pointed to DeMarco Murray as an example of how it’s done. Murray redshirted, fought through multiple serious injuries, stuck around for his senior year, set numerous program records and then led a productive NFL career, including leading the league in rushing in 2014.

Murray was announced Monday as the newest member of Lincoln Riley‘s coaching staff.

“This is a really exciting day, being able to welcome one of our program’s all-time best players back to Norman,” Lincoln Riley said in a statement. “DeMarco had a tremendous playing career both at OU and in the NFL and has a passion for coaching and helping young men grow as players and people. He’s got an incredibly bright coaching future and will be an outstanding mentor to our players. I don’t think there’s anyone better to lead our running backs. Everyone in our program is excited to have DeMarco, his wife Heidi and their children as part of our family.”

A product of powerhouse Bishop Gorman High School in Las Vegas, Murray signed with Oklahoma in 2006 and left school with the program’s record in all-purpose yards (6,718) and touchdowns (65). That means, in all of OU’s storied history of producing prolific offenses, no player carried the ball for more yards or crossed the goal line more than Murray.

“This is very surreal,” Murray said. “Obviously I never thought I’d be back coaching at the place where it all started for me. Having the opportunity to come back and be among great coaches and be with some of the people I grew up with is exciting. I’m thankful for the opportunity Coach Riley is giving me and I’m looking forward to being back home.”

Murray replaces Jay Boulware, who left to become the tight ends coach and special teams coordinator at Texas, his own alma mater.

Murray arrives in Norman with only one year of coaching experience, serving as Kevin Sumlin‘s running backs coach at Arizona last season. After a 7-year NFL career, Murray spent 2018 as an analyst for FOX Sports.

All signs point to Bo Pelini being next LSU defensive coordinator January 27, 2020 2:02 pm

Georgia state rep. proposes pay-for-play legislation with a twist that will make no one happy January 26, 2020 5:06 pm