For the first time in a number of years, there seems to be a real sense of optimism surrounding the Texas Longhorns football program heading into the 2019 season. An appearance in the Big 12 championship game and a victory over the Georgia Bulldogs in the Sugar Bowl has been the fuel for the suggestion, as quarterback Sam Ehlinger proclaimed in New Orleans, that Texas is back. For the Longhorns, that means Texas fans are gearing up to legitimately think about celebrating a long-awaited national championship once again.

The last national championship celebrated in Austin came at the end of the 2005 season with one of the most memorable endings in Rose Bowl history. After being the No. 2 team in the AP poll all season long behind only the Trojans, Texas quarterback Vince Young turned in one of the best performances you could ask for under the pressure of the national championship spotlight. Young completed 30 of 40 pass attempts for 267 yards and rushed for 200 yards and three touchdowns, none more visually memorable as his third, which proved to be the title-winning score to end program’s national title drought that spanned back to the 1970 season (although Texas faithful will argue their case for the 1977 and 1981 titles).

To put things in some perspective, let’s take a stroll down memory lane to see what was going on in 2005, the last time Texas had a national championship season.

That would be none other than George W. Bush. Bush had just been sworn in for his second term in office following a victory in the 2004 election against John Kerry.

Just a couple of weeks after Texas celebrated their national championship victory, “American Idol” was entering its fifth season as the nation’s top-rated television program. This was the season that would eventually lead to Carrie Underwood, a native of Oklahoma, to be named the winner of the singing competition. You may have heard of her. She’s the woman who would go on to sing the theme song for Sunday Night Football on NBC later on in her musical career.

The final chapter in the Star Wars prequel, Star Wars Episode III: Revenge of the Sith had come out earlier in the spring and was probably making its way to DVD by the time Texas started their championship season. But the final movie directed by George Lucas in his Star Wars saga would not be the top movie at the box office in 2005. That honor belonged to Harry Potter and the Goblet of Fire, the fourth installment in the Wizarding World of Harry Potter, which came out in November of 2005. It took a wizard to take down a Jedi in 2005.

Still in an age before Marvel movies took over the superhero genre and the box office ticket sales, the first installment in Christopher Nolan‘s Batman trilogy hit theaters as well with Batman Begins. Amazingly, the remake of Charlie and the Chocolate Factory starring Johnny Depp actually beat Batman at the box office. In hindsight, what were we thinking? Another superhero movie released in 2005 was Fantastic Four, starring Chris Evans, who would later go on to play a much better role in a much better franchise as Captain America.

Also released in 2005? The Adam Sandler-led remake of The Longest Yard. Burt Reynolds made an appearance in the movie as well, of course. 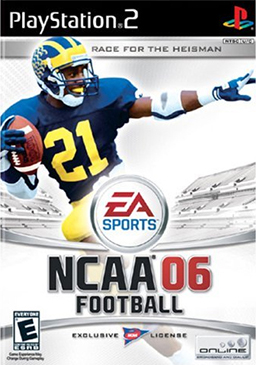 NCAA Football 06 was released by EA Sports on July 12, 2005 for the Sony PlayStation 2 and the Microsoft Xbox. Sorry Nintendo Gamecube fans. You were left out of the game this time. This year’s edition of the game introduced the “Race for the Heisman ” mode, which would become a fun feature of the game in some capacity.

Tiger Woods won his fourth Masters title in 2005. He also won at the British Open.

The NHL had the 2004-2005 season canceled over a labor dispute, so there was no Stanley Cup winner in 2005, although the Carolina Hurricanes would top the Edmonton Oilers in the 2005-2006 season. Cam Ward was the playoff MVP.

Nick Saban was in his first NFL season with the Miami Dolphins. He’d be coming back to the SEC soon enough. At Clemson, Dabo Swinney was a wide receivers coach in his third year on the job. He would be named interim head coach of the Tigers three years later.

Current Texas head coach Tom Herman was in his first season as an offensive coordinator and quarterback coach for Texas State.

The head coach of the last national championship for Texas, Mack Brown, is getting back in the coaching game this season. Brown was essentially forced out of his position as head coach at Texas at the end of the 2013 season, amid some possible expectations Texas boosters would be able to lure Nick Saban away from Alabama. Instead, Texas got Charlie Strong from Louisville. Brown went to work for ABC and ESPN as a studio analyst with some work in the booth to go with it, but after five years on TV, Brown is returning to another one of his previous stops to resume his coaching career. Brown is now the head coach at North Carolina, the school that employed him before Texas hired him away from Chapel Hill prior to the 1998 season.

The NCAA has officially extended its dead period for all recruiting activities, shutting down the key spring evaluation period for college football in the process.

In a brief statement released Wednesday afternoon, via Twitter, the NCAA announced the recruiting dead period, which was originally put into effect in mid-March, was extended through May 31. The decision was made following advice and information from experts monitoring the ongoing pandemic linked to COVID-19.

The extended dead period means no face-to-face contact for coaches and recruits, official and unofficial visits, Junior Days, and more. The decision is not unexpected given the current climate in the sports world and with various stay home orders being extended on a state-by-state basis and federal guidelines and recommendations being adjusted.

As with the previous announcement of the dead period, texts and phone calls (and Zoom conference calls?) are all still allowed to keep communication on the recruiting trail open during these unique times.

The NCAA had originally planned to have a dead period lasting until April 15, at which point the NCAA would evaluate the situation before making another decision. As previously noted, April 15 is traditionally the day when coaches were allowed to visit recruits for the spring evaluation period. This extended dead period will wipe that out, at least for now.

Tulane is preparing to fill one spot on the offensive line with a graduate transfer from Duke. Offensive tackle Jaylen Miller has committed to the Tulane Green Wave, as reported by NOLA.com on Tuesday. Miller reportedly made his announcement with a message on his Instagram account.

“[I] am beyond excited to start my new journey at Tulane University,” Miller said in his Instagram post. “I am looking forward to grinding, sacrificing, and winning with my new family. Let’s get it.”

As a graduate transfer, Miller will be eligible to play this season for Tulane. It will be expected Miller will be a candidate to fill a starting vacancy on the offensive line for Tulane given his previous experience at Duke.

Miller’s 2018 season was cut short in mid-October due to a fractured ankle. Although Miller eventually missed practicing in the spring of 2019 for the Blue Devils while rehabbing, he did serve in a backup role for the Blue Devils last fall. Miller appeared in nine games.

Whether on the recruiting trail or transfer portal, Rutgers football is working it on the personnel front under Greg Schiano.

On his personal Twitter account this week, Keenan Reid announced that he will be continuing his collegiate playing career with the Rutgers football team.  The cornerback spent his first three seasons at Lincoln University in Pennsylvania.  Because he’s moving up from the Div. II level, Reid would be eligible to play immediately for the Scarlet Knights in 2020.  He also has a redshirt available if the need arises.

The move will serve as a homecoming as Reid went to high school in Somerset, NJ.

Extremely BLESSED and grateful to announce I will be continuing my athletic career at Rutgers University. Ready to represent my home state‼️Thank you @GregSchiano , the Rutgers staff,my family,and coaches for helping me get to this stage! Thank God! 🛡⚔️🏈 #CHOP #JERSEY #bigten pic.twitter.com/ghBWCvnE2T

Reid actually enrolled in classes at Rutgers before he even received an offer from the football team.  He participated in walk-on tryouts in late January.  That tryout led to a preferred walk-on offer from Rutgers football head coach Greg Schiano.

Reid was a three-year starter for the Lions.  He finished with a pair of interceptions.  He also blocked six kicks during his time at the lower-level school.

Rutgers football hasn’t been shy in dipping into the transfer portal under its first-year coach.  In early February, the program confirmed the addition of four transfers from Power Five programs.  Three of those came from the Big Ten.  Late last month, an FCS offensive lineman was added to the roster as well.

It was a busy day personnel-wise on the punting front for the Michigan State football program.

Last year, Bryce Baringer placed his name into the NCAA transfer database.  This week, it was reported that Baringer had pulled his name out of the portal, an indication that the punter has decided to remain as part of the Michigan State football team.

Conversely, Michigan State confirmed that Jack Bouwmeester is no longer part of the Spartans football team.  According to mlive.com, Bouwmeester has returned to his native Australia.  No reason was given for the development.  It’s unclear at this point whether the move is permanent.

Baringer began his collegiate career at Illinois.  After taking a redshirt as a true freshman in 2017, Baringer transferred to Michigan State prior to the start of the 2018 season.  Because of injuries that year to the two punters ahead of him on the depth chart, Baringer played in four games.  In that action, he averaged 32.4 yards on 15 punts.  Four of those punts landed inside the 20-yard line.

Mlive.com wrote that “Bouwmeester, who Michigan State found through ProKick Australia, was the program’s first incoming punter recruit to land a scholarship since [Jake] Hartbarger.” Bouwmeester was a three-star 2019 signee, rated as the No. 9 punter in the country.  He took a redshirt as a true freshman after not playing in any games.

Hartbarger served as the primary punter for Michigan State last season.  As a sixth-year senior, Hartbarger’s eligibility has expired.

Baringer is one of three punters currently on the Michigan State roster.  The others are redshirt junior walk-on Tyler Hunt and redshirt freshman walk-on Evan Morris.  Hunt was the second of the two punters injured during that 2018 season.  Hunt, who replaced the injured Hartbarger that year, started five games, punting 36 times for an average of 40.1 yards per.

College Football in Coronavirus Quarantine: On this day in CFT history April 1, 2020 11:44 am

College Football in Coronavirus Quarantine: On this day in CFT history March 31, 2020 11:39 am

Unlike Kirk Herbstreit, Rece Davis ‘hopeful and optimistic’ 2020 college football season will be played March 31, 2020 9:43 am