Monday is Depth Chart Day in college football, the day in which coaches have to show their cards in regards to who’s actually going to start when the season finally gets underway this weekend.

Of course, they don’t have to show their cards. Plenty of coaches litter their depth charts with ORs or simply decline to reveal a starting quarterback until one man takes the first snap and the other(s) do not.

The new Yellow Jackets head coach is reimagining Ramblin’ Wreck football not just in brand, but in scheme. As such, he has an advantage as a new head coach since he has no starters, and he’s using that to his advantage with this anti-depth chart.

Collins simply lists the players he expects to play in numerical order, but the actual starters are not listed. The program explains it like this:

Since he was first asked about depth charts and two-deeps, Georgia Tech head coach Geoff Collins has insisted that he doesn’t believe in them. He coaches his student-athletes to be ABOVE THE LINE (ATL). Those who are ATL are ready to play and can see game action, while others work to get to that level. In place of a traditional depth chart that often omits some student-athletes who see game action and lists others who seldom enter the game, Georgia Tech will list student-athletes who are above the line, in numerical order by position (studentathletes that started the previous game are printed in bold).

Here’s how it looks. 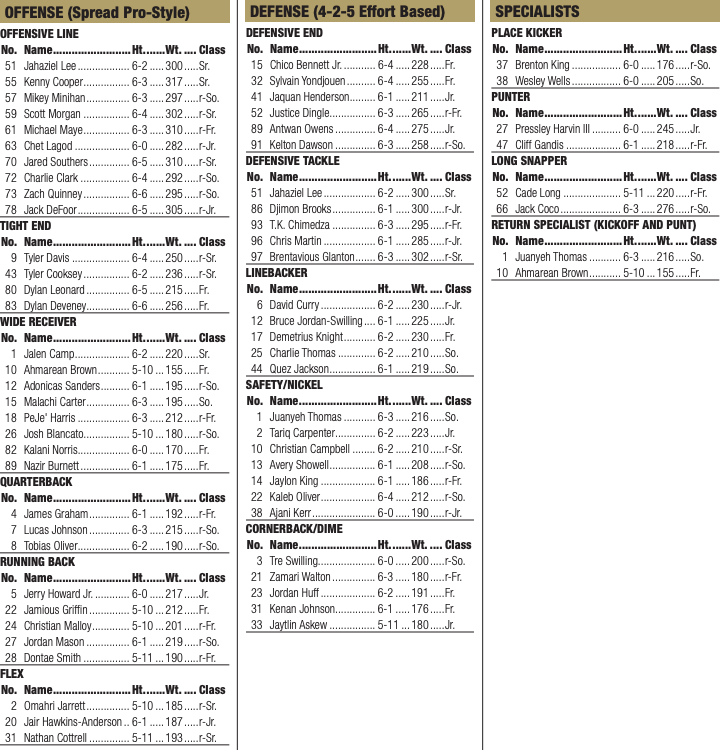 Georgia Tech and its ATL players will hit the field Thursday night at No. 1 Clemson (8 p.m. ET, ACC Network).

The playing career of one injury-plagued Boise State football player has come to an end.  At least, in Idaho it has.

According to 247Sports.com, DeAndre Pierce has made the decision to move on from the Boise State football program.  A BSU football official subsequently confirmed overnight that the defensive back’s name is listed in the NCAA transfer database.

No specific reason for the parting of ways was given.

If Pierce follows through and transfers away from Boise State football, he would do so as a graduate transfer.  That would allow him to play at another FBS school immediately in 2020.  If that’s the tack he chooses, of course.

Pierce was a three-star member of the Broncos’ Class of 2016.  The California native took a redshirt as a true freshman.  In 2017, Pierce started 11 of the 14 games in which he played.  He earned honorable mention All-Mountain West Conference honors for that season.

Then, the injuries hit.

The safety started four of the first five games in 2018 before a lacerated spleen sidelined him for the rest of the season.  In 2019, Pierce started five games… but missed the other nine because of various injuries.

When healthy, Pierce was credited with 144 tackles, seven tackles for loss, six passed defensed, one sack and one interception.

Even as the off-field aspect was cleared up for one member of the Texas Longhorns football program, there’s still no clarity as it relates to him getting back onto the field.  And likely won’t be clarified for a few months.

In August, Joshua Moore was arrested on a charge of unlawful carrying of a weapon. Thursday, the wide receiver pleaded no contest to a misdemeanor weapons charge. Moore avoided jail time with the plea, with the Austin American-Statesman writing that “[t]he deferred adjudication agreement states [Judge Nancy] Hohengarten will not enter a guilty finding if Moore stays out of further legal trouble over the next year, completes 60 hours of community service and fulfills any counseling conditions the probation department recommends.”

Because of the off-field situation, Moore was not permitted to play in games for Texas Longhorns football last season. He was, though, allowed to practice with the rest of his UT teammates.

A Texas Longhorns football official stated after the player’s plea that a decision on whether Moore will be permitted to play in games in 2020 won’t be determined until closer to the season kicking off.

A four-star 2018 signee, Moore played in the first six games as a true freshman before going down with a season-ending shoulder injury. In that half-season of work, the 6-1, 180-pound receiver totaled 53 yards and a touchdown on seven receptions.

If he’s cleared to play in games — the odds are very much in his favor, provided he doesn’t violate the terms of his plea agreement — Moore is expected to take on a bigger role in the Texas Longhorns football passing game in 2020.

Karl Dorrell‘s first Colorado football coaching staff will have a decidedly Mel Tucker feel to it.

Feb. 12, Tucker left Colorado football to take over as the head coach at Michigan State.  Eleven days later, Dorrell was the surprise hire as Tucker’s replacement.  Dorrell’s first hirings four days his official hiring will actually be retentions as the program announced that four of Tucker’s former assistants will remain as part of the new coaching staff.

According to the release from Colorado football, the holdovers’ “exact responsibilities will be determined once the remaining six assistant positions are filled, which Dorrell hopes to conclude sometime early next week.” It’s believed that Chiaverini will serve as Dorrell’s offensive coordinator, although, obviously, that hasn’t yet been confirmed.

“It’s always important if you can maintain some continuity during a coaching change,” the new Colorado football head coach said in a statement. “I’ve been around enough college and professional teams where doing so offers some stability. I had great conversations with all four and while I haven’t determined their exact roles as of yet, I am excited that we share the same goals and vision for the program. I am excited about all four and am looking forward to working with them.”

Both Chiaverini and Hagans have been a part of the Colorado football program for the past four seasons.  Both Summers and Michalowski were in their first years in Boulder.

Prior to his departure for East Lansing, Tucker had just completed his first season in Boulder, going 5-7.  Since a 10-4 2016 season, the Buffaloes have gone 5-7 each of the past three seasons.  That 2016 season is the program’s only winning record since 2005.