Tennessee may be a trainwreck — or, more appropriately, a self-described shipwreck — on the field at the moment, but, in one instance, they went beyond classy off of it.

A Florida elementary school teacher, Laura Snyder, posted a sad and infuriating story on Facebook earlier this month about one of her students, a young boy, being bullied by a group of girls (guarantee at least one of them was named Karen) during lunchtime. The reason behind the bullying was the unidentified young man wearing a homemade University of Tennessee t-shirt for “College Colors Day” at the school that apparently didn’t meet the Mean Girls standards.

From Snyder’s post, which I highly recommend clicking HERE to read it in its entirety:

Some girls at the lunch table next to his (who didn’t even participate in college colors day) had made fun of his sign that he had attached to his shirt. He was DEVASTATED. I know kids can be cruel, I am aware that it’s not the fanciest sign, BUT this kid used the resources he had available to him to participate in a spirit day. 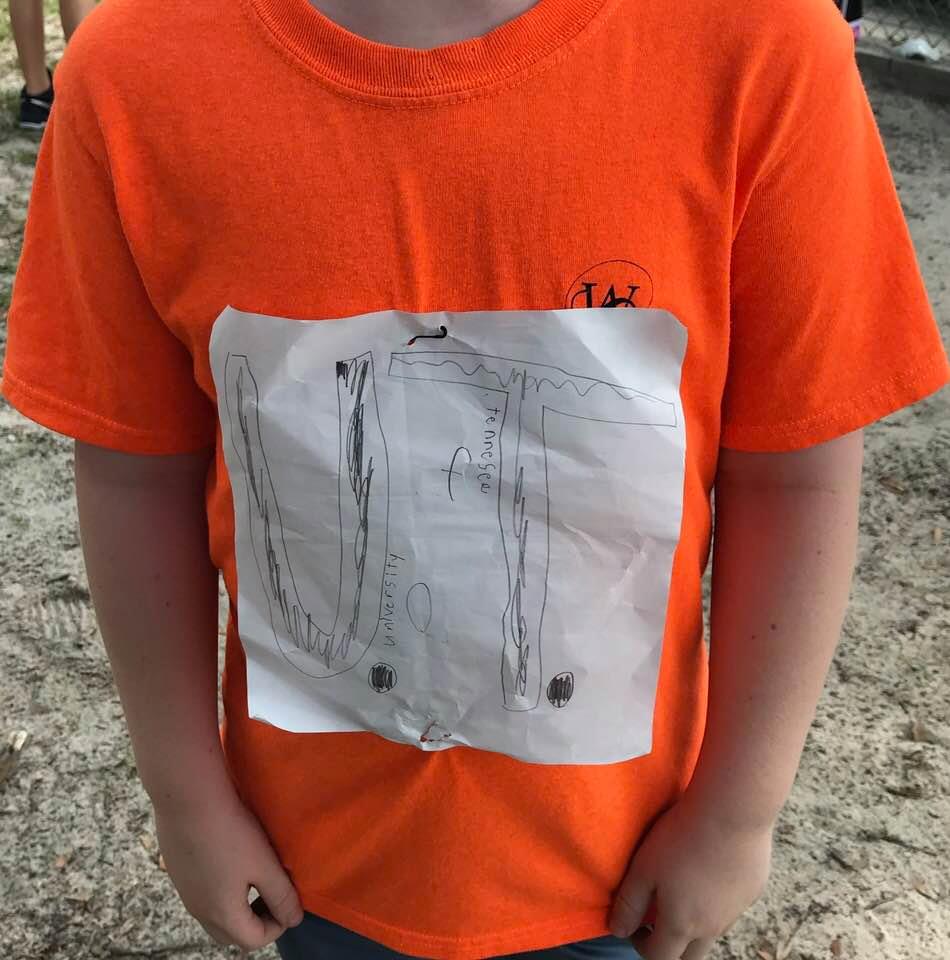 Snyder stated later in the post that she would be buying the devastated young man his own UT shirt while also “wondering if anyone has any connections to the University of Tennessee” as she wants “to make it a little extra special for him.” First, the university responded by sending the boy a care package that included, among other swag, a jersey, hats, bracelets, water bottles, pens and cooling towels.

Then, the boy’s design was turned into a t-shirt that is now on sale at the official UT online store, with all of the proceeds earmarked for a national anti-bullying group.

You asked for it, and @UTVolShop made it happen. 🍊👊 https://t.co/nBGYmyooC1

“When I told him that his design was being made into a real shirt and people wanted to wear it, his jaw dropped,” Snyder wrote in her updated Facebook post. “He had a big smile on his face, walked taller, and I could tell his confidence grew today! Thank you to the UT Nation for that!!”

When they want to be, human beings are amazingly compassionate creatures. Well done, UT and Vols Nation.

Last week, it was reported that USC was expected to poach Vic So’oto from Virginia.  As Clint Sintim‘s hiring as So’oto’s replacement was announced a few days later, the latter’s move to the Trojans was a mere formality.

Tuesday, USC football confirmed So’oto’s addition to Clay Helton’s staff.  As he did with the ‘Hoos, So’oto will serve as the Trojans’ defensive line coach.

The 32-year-old So’oto was the line coach at Virginia for the past three seasons.  Prior to that, he was a defensive graduate assistant at the ACC program.

So’oto played his college football at BYU, ending his four-year career in 2010.  After his NFL career ended, So’oto began his collegiate coaching career as a football intern at his alma mater.

For those unaware, So’oto is the second cousin of USC football legend Junior Seau.

LSU football has officially replaced one of the hottest young coaches in the sport.

Not long after LSU football claimed the 2019 national championship, Joe Brady left to take over as the offensive coordinator for the NFL’s Carolina Panthers. Earlier this month, it was reported that Scott Linehan was expected to be hired as Brady’s successor.

Tuesday, LSU confirmed that Linehan has indeed been named by Ed Orgeron as the Tigers’ new passing-game coordinator. The 56-year-old Linehan has spent the past 17 seasons he’s been a coach at the NFL level.

Linehan was out of coaching this past season.

“Scott brings a wealth of knowledge to our offense,” the LSU football head coach said in a statement. “We wanted to bring in someone who will expand our passing game and with Scott’s experience as an NFL head coach and offensive coordinator we feel this is the best move for our offense. After talking to numerous people with NFL experience and interviewing Scott we knew he was the right fit for the LSU Tigers.”

In 13 of those seasons in the NFL, Linehan served as an offensive coordinator.

In the other four NFL seasons in which he wasn’t a coordinator, Linehan was the head coach of the St. Louis Rams (2006-08) and passing-game coordinator for the Cowboys (2014).

Linehan’s last job at the collegiate level came as the offensive coordinator and wide receivers coach at Louisville (1999-2001). From 1996-98, he was the coordinator at Washington.

The American Athletic Conference will again play football in 2020, the conference confirmed on Tuesday.

The 2020 season will also be the conference’s first under the new rights agreement it struck with ESPN in March. As such, at least 40 American home games will be shown on the ESPN family of networks, and at least half of those will be on ABC, ESPN or ESPN2. The conference will play a total of 12 games on Thursday or Friday nights.

“We are excited to announce our 2020 schedule as we enter the next phase of our longstanding relationship with ESPN,” said commissioner Mike Aresco. “With the continued success our schools have had, I have no doubt that we will once again provide our fans, and ESPN, with compelling matchups throughout the season in both conference and nonconference play. We look forward to another outstanding season of American Athletic Conference football.”

The season will begin on Saturday, Aug. 29 when Navy “hosts” Notre Dame at Aviva Stadium in Dublin, Ireland. That game will be shown on ESPN with College GameDay in tow as part of the network’s season kick-off effort. While the full schedule can be viewed here, highlights include:

The 2020 American season will conclude with the sixth annual American Championship on Saturday, Dec. 5.

George Costanza was never much of a college football fan. He was a New Yorker, after all. But he was a fan of the No. 7, and so he would have a new favorite college football player in 2020.

A product of Orlando’s Jones High School, Sevyn Banks has been a member of Ohio State’s defensive backfield since 2018. The former 4-star recruit has received limited playing time in the Buckeyes’ loaded defensive backfield, but figures to compete for a starting spot in 2020.

And now he’ll do so in his namesake number.

Banks announced Monday he will switch from No. 12 to No. 7 for the upcoming season.

The No. 7 had been claimed by linebacker Teradja Mitchell, who is now switching to No. 3, opening No. 7 for, well, Sevyn.

Banks appeared in all 14 games for Ohio State last season, collecting 11 tackles and one interception.

He’ll hope to get more burn in 2020, with some support from a fictional New Yorker.

Notre Dame could be landing spot for Stanford transfer Trevor Speights February 18, 2020 11:11 am