As the watch lists for on-field honors continue to roll out, an award for what’s essentially scholastic excellence has significantly whittled its list to the chosen several.

The National Football Foundation, in conjunction with the College Football Hall of Fame, announced Wednesday the 12 finalists for the 2019 William V. Campbell Trophy. Commonly referred to as the “Academic Heisman,” the Campbell Trophy annually “recognizes an individual as the absolute best football scholar-athlete in the nation.”

Seven of the 12 come from the FBS level, including six from Power Five conferences. Another three hail from the FCS, while Div. II and Div. III are represented by one finalist apiece.

The Pac-12 had two finalists, the most for any single conference.

Last year, Clemson’s Christian Wilkins became the 29th winner of the prestigious honor. The winner of this year’s award will be announced Dec. 10.

Each of this year’s finalists will receive an $18,000 postgraduate scholarship.  This year’s winner will see that scholarship dollar amount increase to $25,000.

“We are extremely proud to announce the finalists for this year’s Campbell Trophy® Presented by Mazda,” said NFF president & CEO Steve Hatchell in a statement. “These young men have an unrelenting commitment to excellence in all aspects of their lives, and they represent all that is right in college football. They serve as living examples that Football Matters®, and we are excited to honor their hard work and accomplishments with postgraduate scholarships.

As for the qualifications to even earn a nomination?

Nominated by their schools, which are limited to one nominee each, candidates for the Campbell Trophy® Presented by Mazda must be a senior or graduate student in their final year of playing eligibility, have a GPA of at least 3.2 on a 4.0 scale, have outstanding football ability as a first-team player or significant contributor and have demonstrated strong leadership and citizenship.

Below are all 12 finalists for the 2019 Campbell Trophy who have met that criteria: 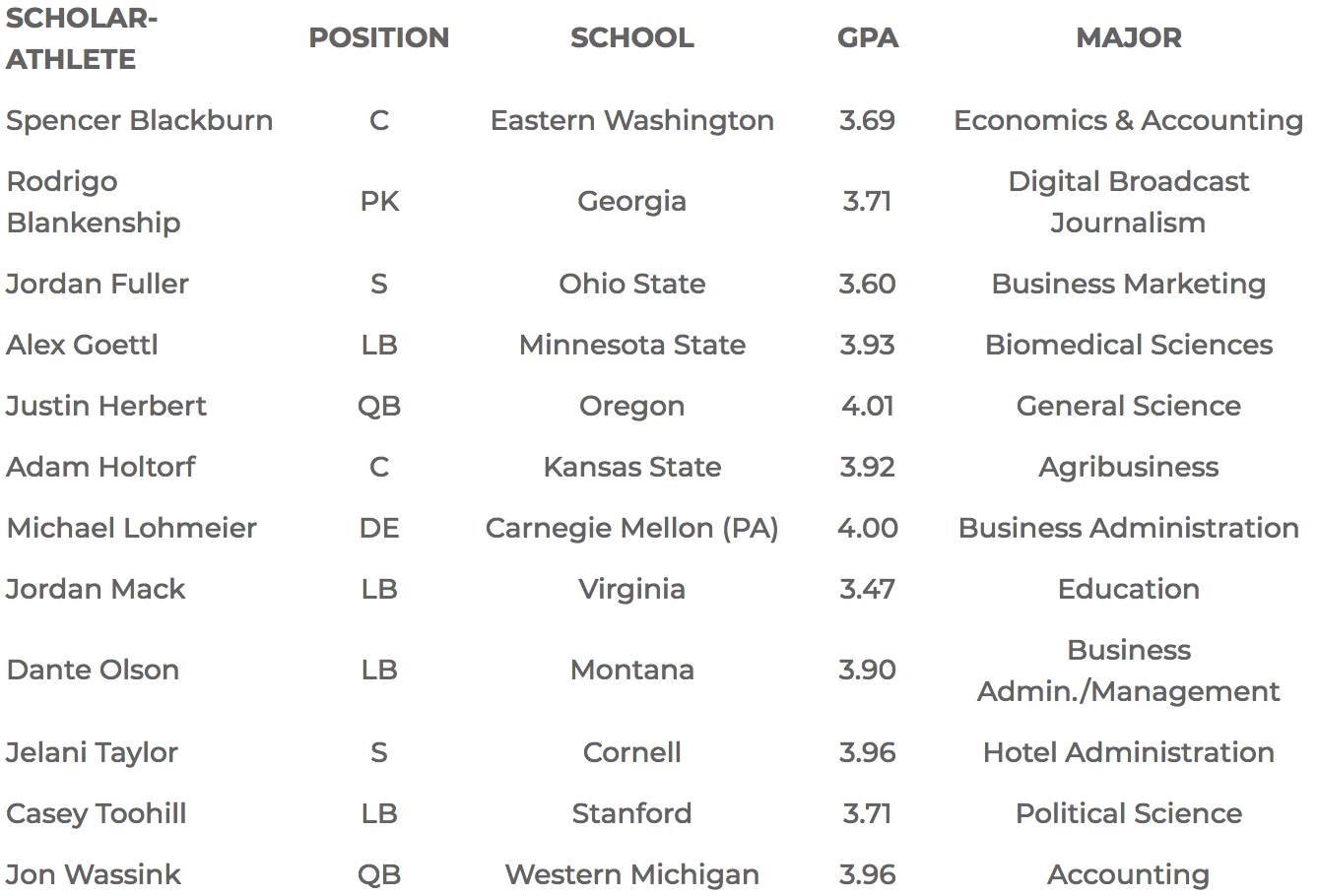 Already with a crowded quarterback room, UTSA has added another player at the position to its football roster.

In early March, Josh Adkins took the first step in leaving New Mexico State by entering his name into the transfer portal.  On Twitter nearly a month later, Adkins announced that he will be transferring into the UTSA football program.

As a graduate transfer, Adkins will be eligible to play immediately in 2020.  On top of that, he will have another year of eligibility he can use in 2021 as well.

A three-star 2017 signee, Adkins was rated as the No. 61 pro-style quarterback in the country.  Adkins was the highest-rated signee in the Aggies’ class that year.  He also took a redshirt for the 2017 season

Adkins was a two-year starter at New Mexico State.  In that span, the Spring Branch, Tex., native completed nearly 60 percent of his 830 passes.  He finished the NMSU portion of his career with 5,151 yards, 27 touchdowns and 24 interceptions.  He also scored four touchdowns on the ground and one through the air.

With Adkins’ addition, the Roadrunners are set to have six quarterbacks on campus in the fall: Adkins, Frank Harris, Jordan Weeks, Lowell Narcisse, Suddin Sapien and 2020 recruit Cameron Peters. The first four have each started at least one college football game. Adkins is the first quarterback fully recruited by new coach Jeff Traylor.

When he’s not lighting up Twitter, Mike Leach has been busy adding transfers to his Mississippi State football roster.  This week, Leach has lost one to Ye Olde Portal.  Possibly because of the Twitter machine.

Thursday, the Mississippi State football head coach sent out a tweet in which he apologized for anyone he offended in a previous tweet.  In the tweet in question, the caption read “After 2 weeks of quarantine with her husband, Gertrude decided to knit him a scarf..”  The picture attached to it?  An elderly woman knitting a noose.

Coincidentally or not, Lovett used his personal Twitter account a day later to announce that he has entered the NCAA transfer database.  The defensive lineman didn’t specifically cite Leach’s tweet as the trigger for his decision to leave the Mississippi State football team.

I have entered the transfer portal with 3 years left of eligibility.

Lovett was a three-star 2018 signee.  He was rated as the No. 7 player regardless of position in the state of Mississippi.

The past two seasons, Lovett appeared in 15 games.  13 of those appearances came in 2019.  A year ago, the defensive end was credited with 19 tackles, 2½ tackles for loss and a sack.

Because he appeared in four or fewer games in 2018, Lovett was able to take a redshirt for that season.  That will leave the lineman with three years of eligibility.  However, he Will Likely have to sit out the 2020 campaign if he transfers to another FBS school.

Jan. 9, Leach was named the new head coach of the Mississippi State football team.  Since then, the Pirate has added at least four transfers.  All of which, incidentally, will come in from Power Five programs:

Florida athletic director Scott Stricklin is looking to the future even if spring in the SEC has been put on pause as a result of the coronavirus.

Per FBS Schedules, the Gators have added Florida A&M to their 2025 non-conference football schedule on Oct. 11 of that year. The move completes that season’s slate and will interestingly result in UF featuring every non-conference game against an in-state opponent.

Yes, we’ll have a good idea of who is truly the Sunshine State champ for real come 2025.

In addition to the game against the FCS Rattlers, the Gators will host USF in Gainesville and play at Miami in late September. Their traditional season-ender against another team from Tallahassee in Florida State will take place on Nov. 29.

The all-Florida non-conference schedule comes just as the program has actually been trying to do the opposite. The Gators were long criticized for rarely venturing outside the state’s borders for non-league games but have changed their tune recently. This has resulted in big home-and-homes with Utah, California, Colorado, Texas and Arizona State among others.

In 2025 however, football will come a lot closer to home even with those long trips on the future docket.

You can add Oregon athletic director Rob Mullens to the growing list of people in college athletics taking pay cuts as the result of the coronavirus pandemic.

In a story posted to the university’s website on Thursday, UO confirmed that Mullens would be joining 10 other vice presidents in taking a 10 percent pay cut for the next six months. School president Michael H. Schill also announced he would reduce his salary 12 percent for the same term.

“Simply put, we are all going to have to make sacrifices,” Schill said at a virtual town hall for faculty. “I am working hard with other administrators to try to preserve as many jobs and benefits as we can as we face uncertain economic times.”

Mullens is coming off a stint on the College Football Playoff Selection Committee and served as its chairman the past two years as the face of the weekly rankings.

The Ducks top boss is in the middle of a contract that runs through 2025 according to The Oregonian. Mullens is set to make $717,500 this year though it’s not known if he will no longer get his six-figure retention bonus due at the end of June. Given the state of finances at colleges across the country, we’re betting that likely gets deferred.

The pay cut for Mullens and others at Oregon is scheduled to last six months but the school noted that it’s possible they will continue through the end of the 2021 school year.

The move to slash salary is not limited to Eugene. Already we’ve seen Wyoming’s AD do the same and even larger across the board cuts be made at Iowa State.

Given the revenue shortfalls we’ve seen this spring and the potential for the COVID-19 to impact the football calendar, it seems likely these are just the first of many such announcements coming from schools across the country.

Clemson coach Dabo Swinney has no doubt CFB will start on time in August April 3, 2020 2:44 pm

College Football in Coronavirus Quarantine: On this day in CFT history April 3, 2020 12:48 pm