For the first time in 40 years, an Ohio State coach has won the Big Ten Coach of the Year award. The league’s media has historically subscribed to the thinking of the best coaching job equates to the team that most outperformed its preseason expectations, which then disqualified Ohio State, who could never outperform an expectation that saw the Buckeyes winning the conference more often than not.

That’s how John Cooper, Jim Tressel and Urban Meyer could all coach themselves into the College Football Hall of Fame without winning a single Big Ten Coach of the Year honor. Earle Bruce, in 1979, was the last Ohio State coach to win the honor, until today. Ryan Day has been selected as the Big Ten Coach of the Year by the league’s media. Minnesota’s PJ Fleck won the award from the league’s coaches.

The conference also announced its positional awards and its All-Big Ten teams on the defensive and special teams sides of the ball.

The league announced a total of 12 all-conference teams on Tuesday, six each by the media and coaches. 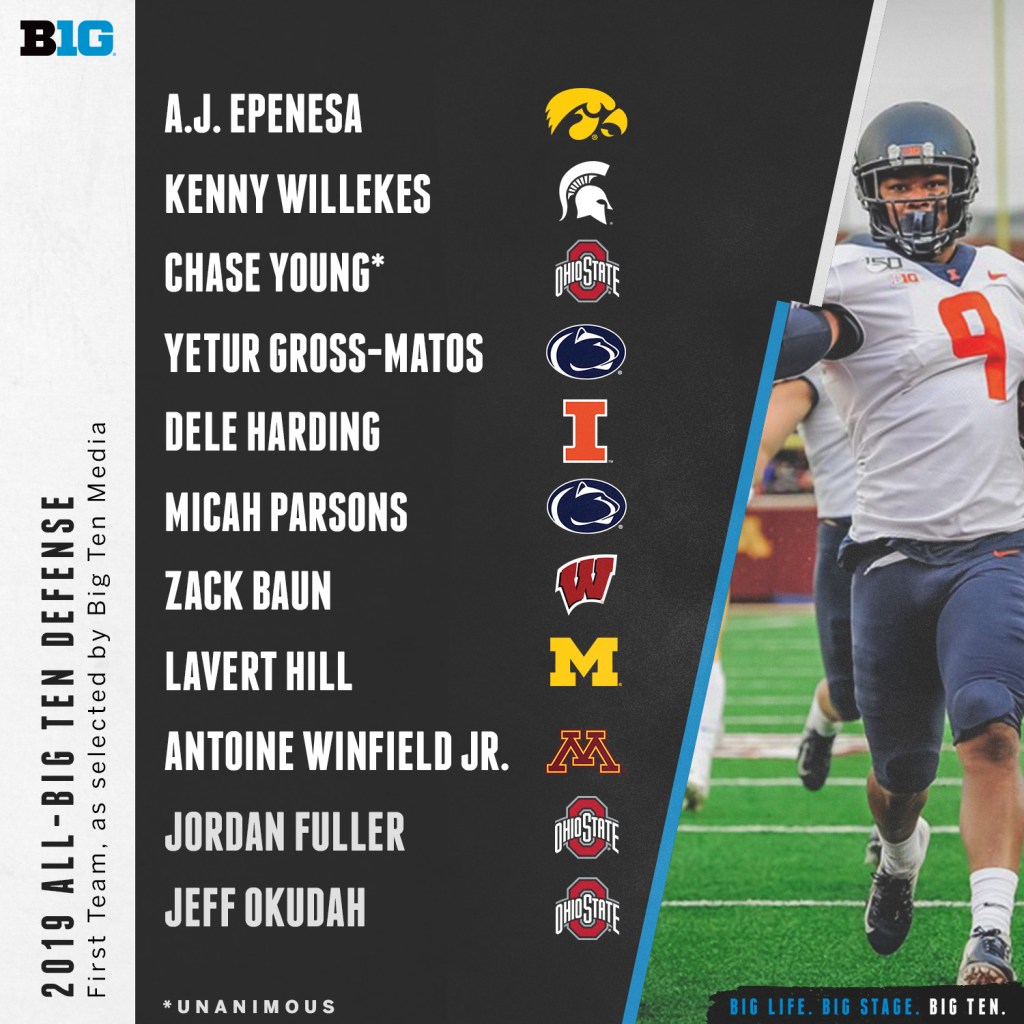 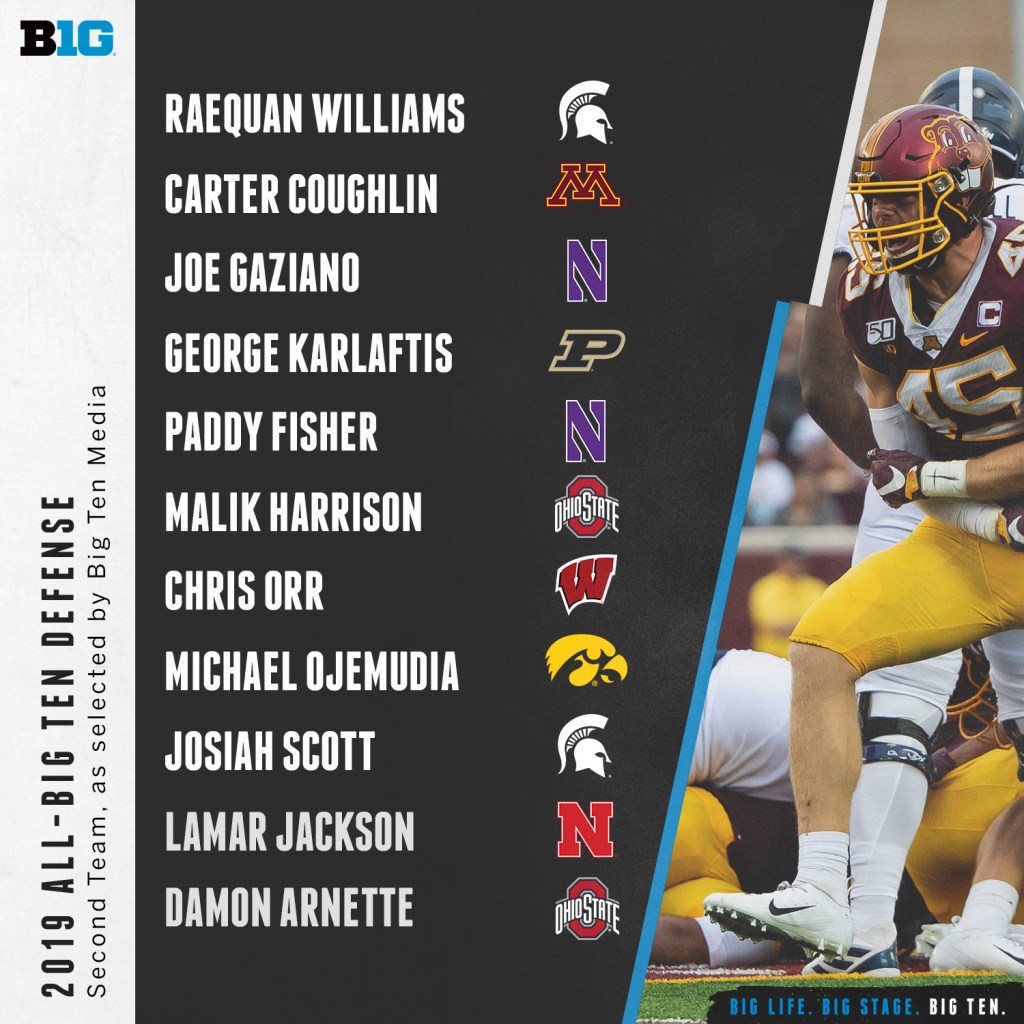 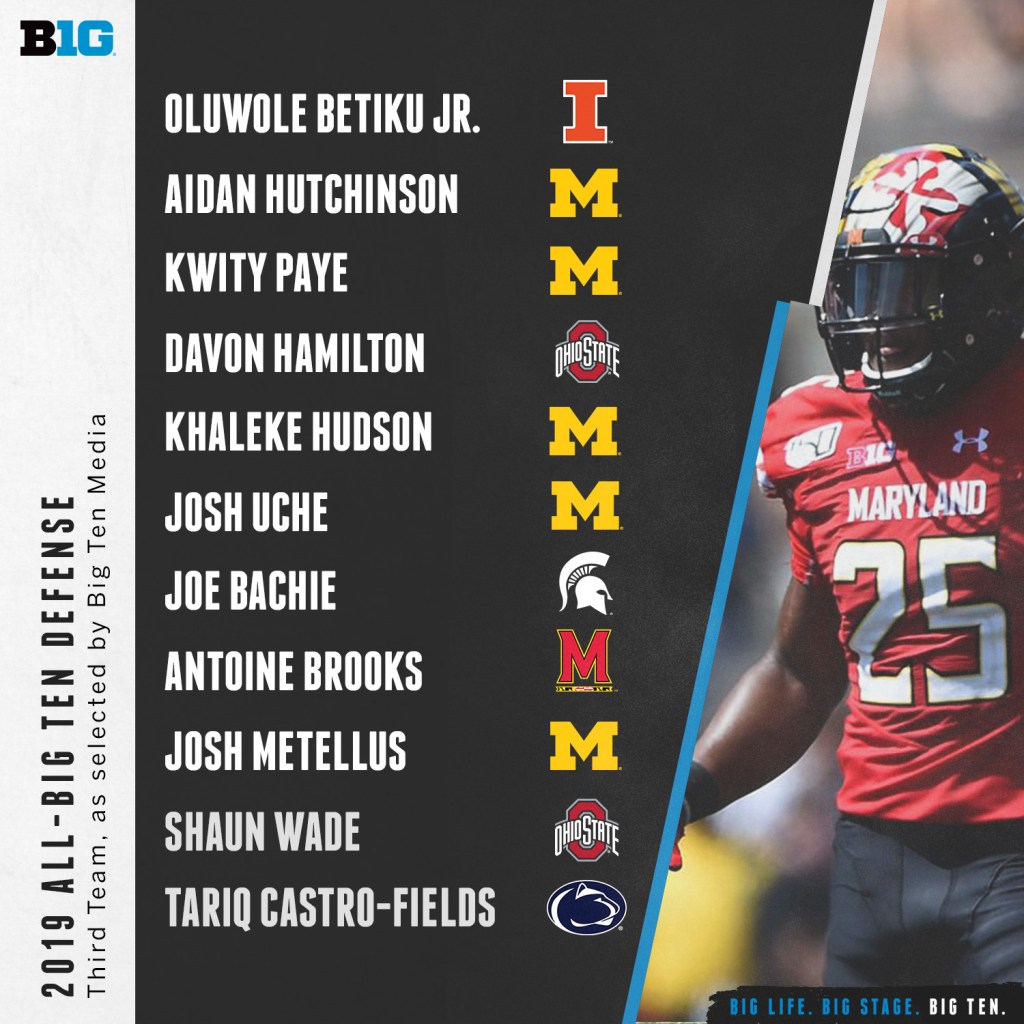 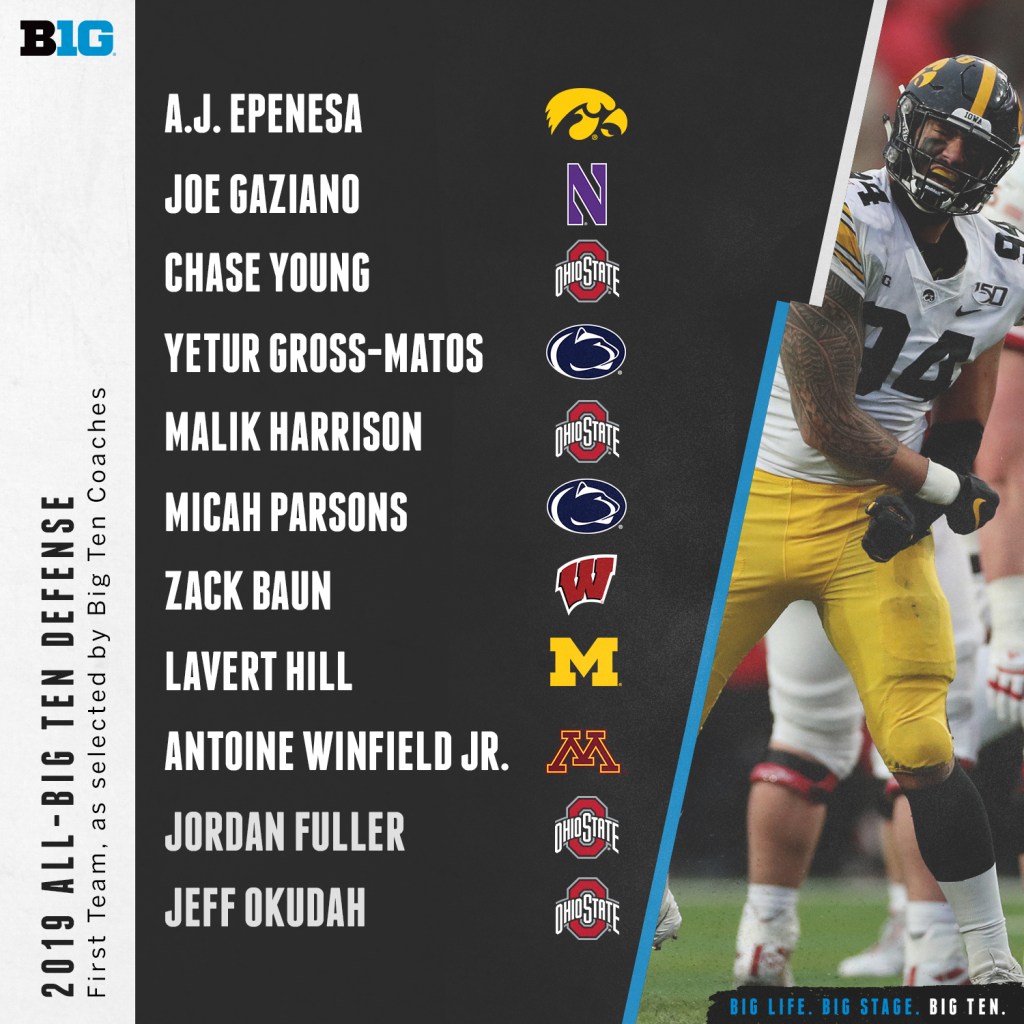 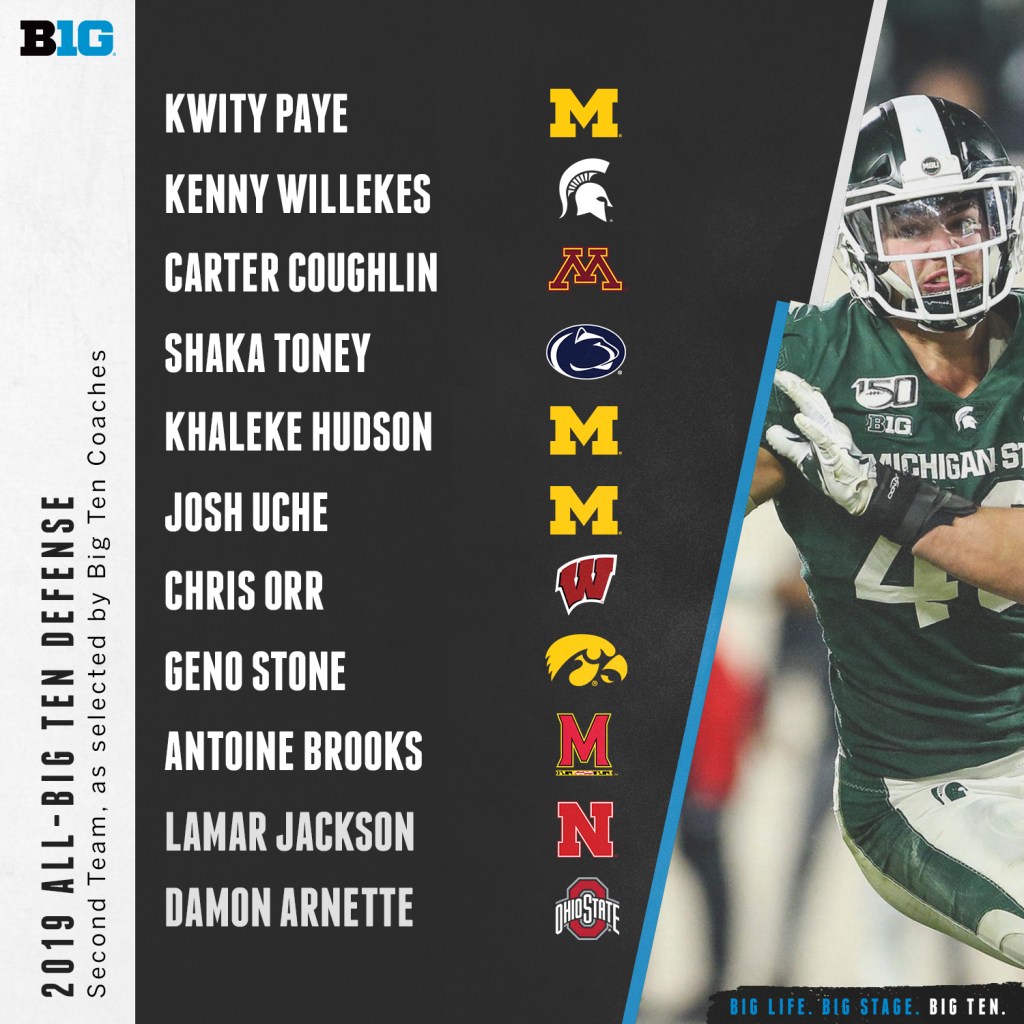 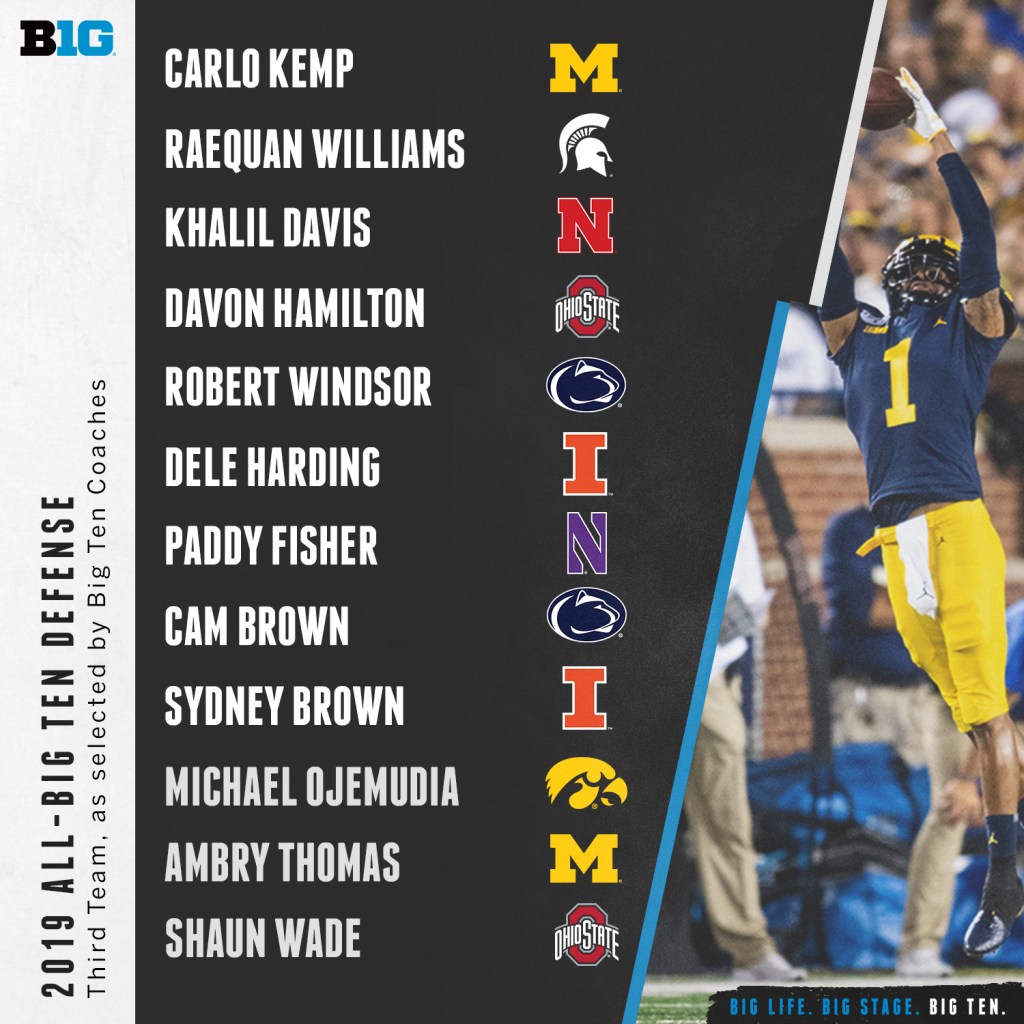 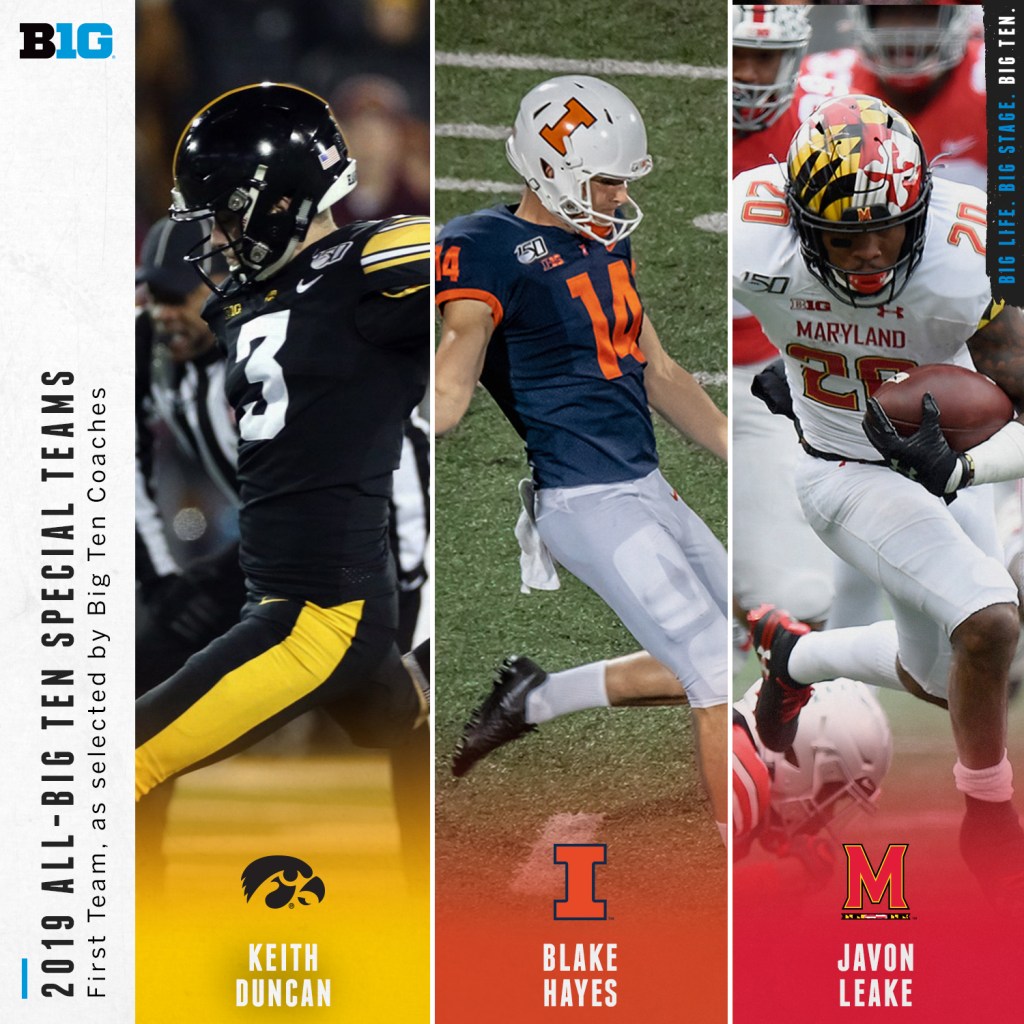 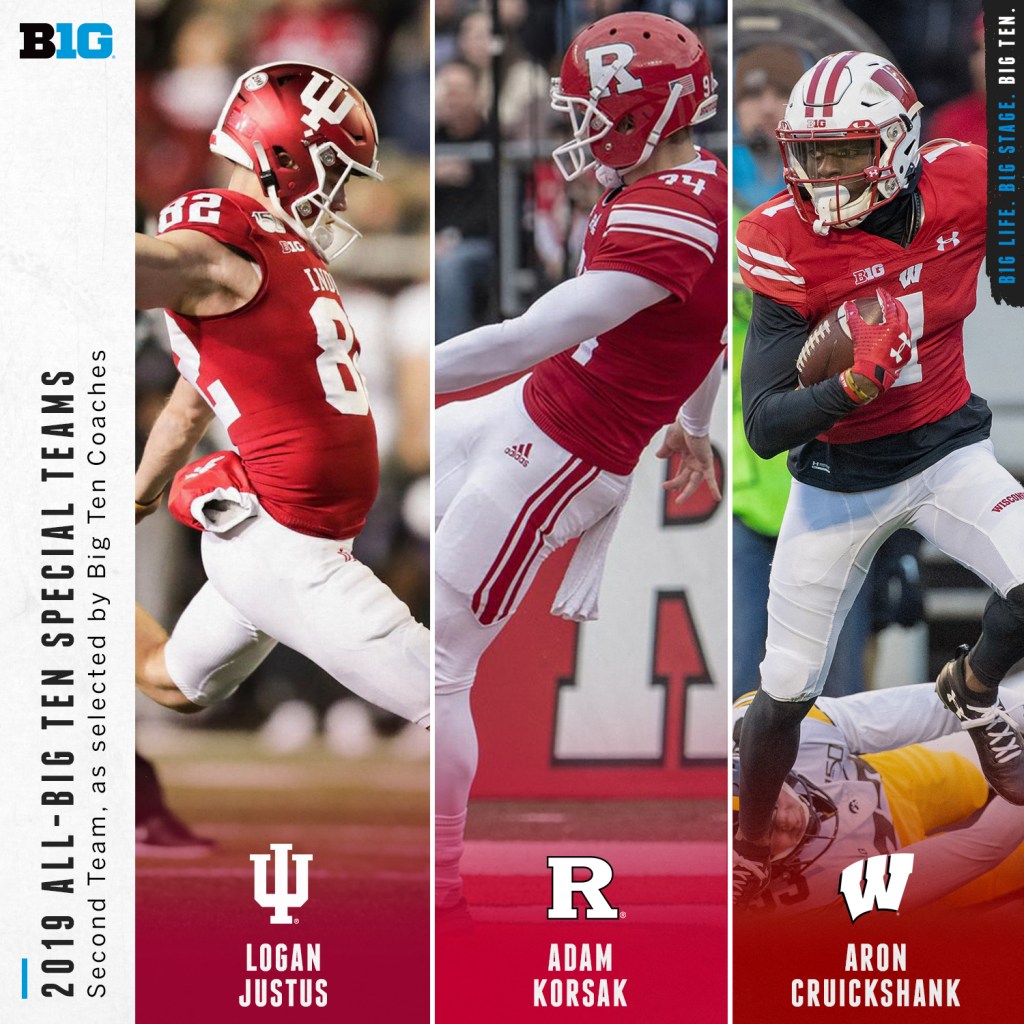 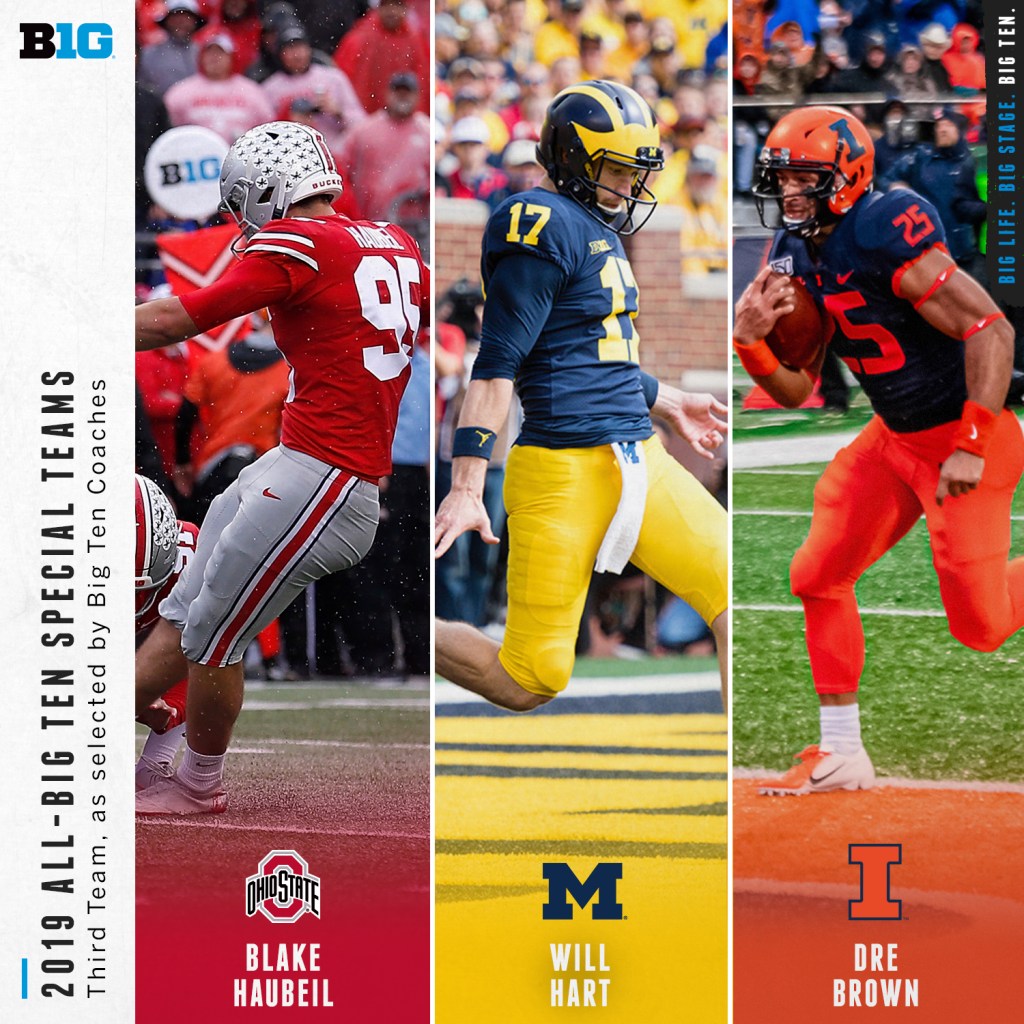 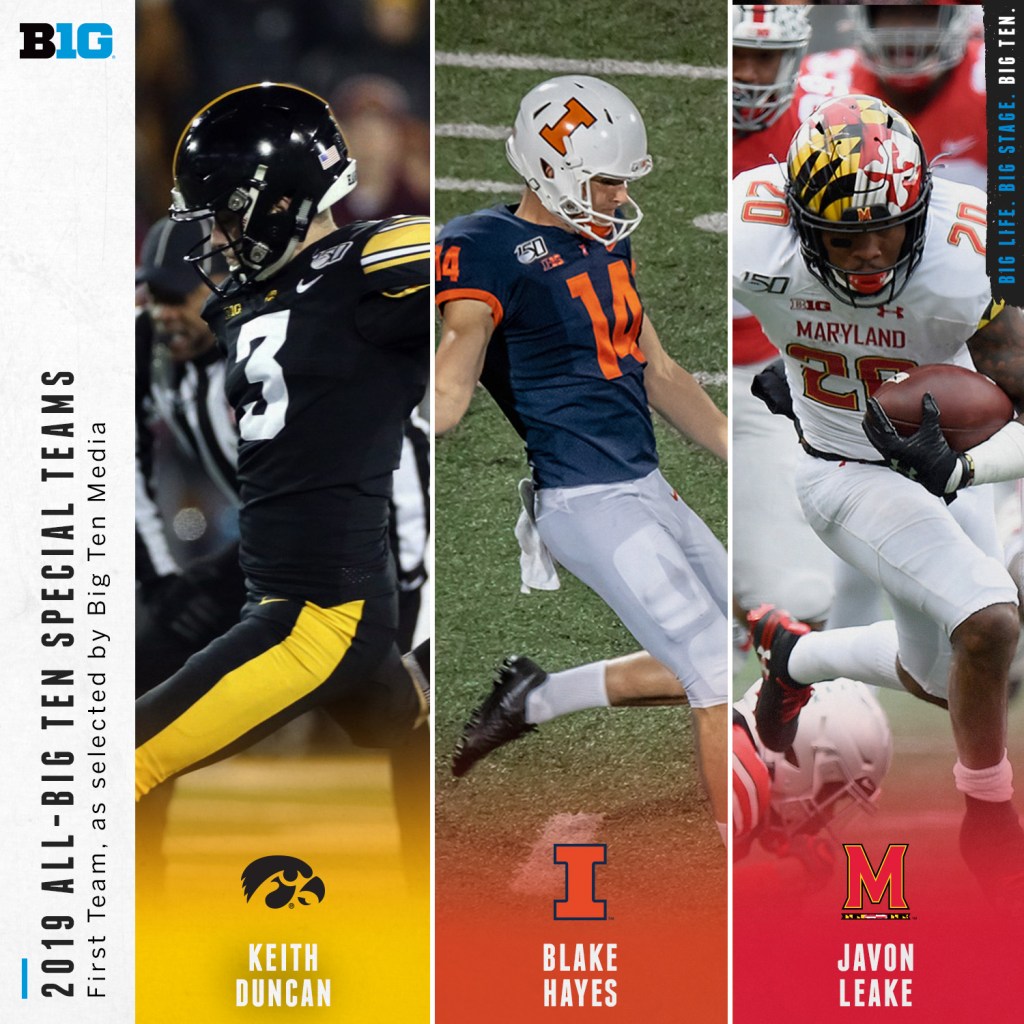 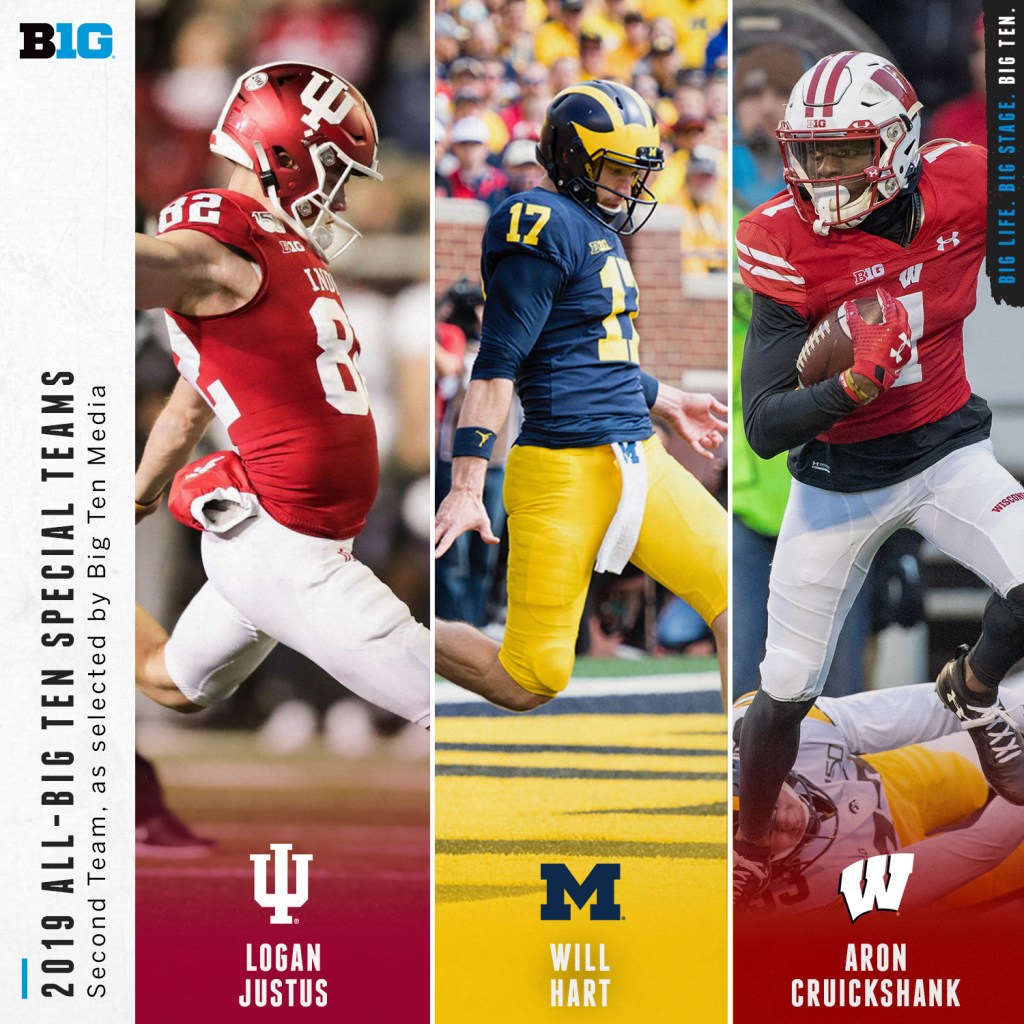 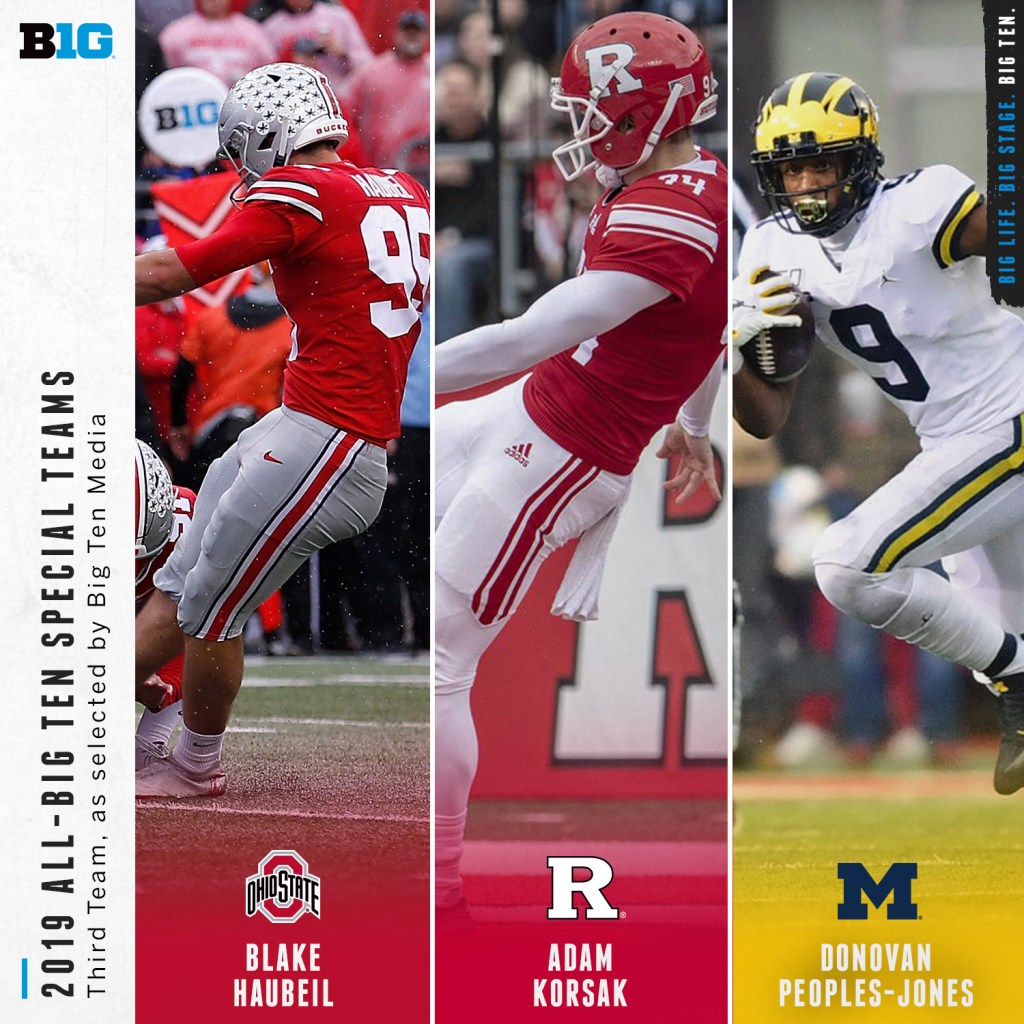 For the second time since Mel Tucker left for Michigan State, Colorado football has seen a player leave the team. This one, though, comes with a bit of a twist.

In December of last year, Brendan Pyne transferred into the Colorado football program from the Ivy League. Four days after Karl Dorrell was confirmed as Tucker’s replacement, however, it was reported Pyne intended to leave the Buffaloes.

Subsequent to that report, a Colorado football official confirmed that the linebacker’s name is now listed in the NCAA transfer database. The plan had been for Pyne to join the Colorado football team for the spring semester as a walk-on.

Whether Dorrell can get Pyne to flip back to the Buffaloes remains to be seen.

Pyne played at Brown from 2016-19 and has one season of eligibility remaining. Because of Ivy League rules that require players to use all of their eligibility in their first four years, it triggered the Florida native’s initial decision to transfer.

A starter the past three seasons, Pyne led Brown in tackles in 2019. His eight tackles for loss in 2019 ranked 10th in the Ivy League.

Pyne’s great-grandfather, grandfather and father all spent time in the NFL. His uncle, Jim Pyne, was an All-American at Virginia Tech and played for nine seasons in the NFL. During the Early Signing Period in December, Pyne’s younger brother, four-star quarterback Drew Pyne, signed with Notre Dame.

On top of all that, another grandparent, Paul Harney, is in the PGA Golf Hall of Fame.

Even with all of that familial success, Pyne is carving out his own impressive path. From CU’s release confirming his arrival:

Off the field, he served as a teaching assistant at Brown for two Business Entrepreneurial classes and was a Digital Media Intern at the NBC Sports Group. He also interned for two years with the Sports Media Advisors Group where he constructed a marking overview on sports gambling and advised Duke Basketball on social media strategy. He also interned for Learfield while at Brown and he has also volunteered for the Special Olympics.

Last week, quarterback Blake Stenstrom announced that he would be transferring from Colorado football as well.

This is quite the odd “loss” for Clemson football.  To say the least.

Back in December, Tanner Tessmann signed to play soccer at Clemson.  The plan was also for Tessman to kick for the Clemson football team as a scholarship player as well.

Thursday, however, FC Dallas announced that the 18-year-old Tessmann has signed a three-year contract with the Major League Soccer team.  The deal also contains club options for the 2023 and 2024 seasons.

Tessmann could begin his professional soccer career as early as Saturday.

“I’m excited to get started,” Tessmann said in a statement. “Signing a professional contract has been a goal of mine since I moved to Texas to join the Academy at 14 years old. I’ve made a lot of sacrifices to get this opportunity, so it meant a lot to have my family here with me today.”

Back in December, Dabo Swinney was very, very effusive in his praise of Tessman, who the Clemson football coach has known for the young man’s entire life.

(Clemson soccer coach Mike) Noonan is somewhere, having a party somewhere right now because he just signed an unbelievably talented soccer player,” Swinney said back then. “But I’ve had the inside track on this one for a long time. My best friend is PJ Tessmann, and we’re basically brothers-in-laws…so I’ve kind of been the pseudo uncle to his two kids – Tanner, and his daughter Ashley literally their whole lives and kind of been Uncle Bo and kind of like Godfather if you will.

“But I had the inside track because I’ve seen him his entire life. And he’s one of the best athletes. He could go play D1 basketball. He could probably start at receiver at Clemson. He could probably play safety at Clemson. He’s a six-foot-two phenom. He can fly. He’s as good athlete as I’ve ever seen…It was a really difficult thing but, you know, it was a very tough thing for PJ and his mom, PJ’s wife Kelly, because FC Dallas came recruiting him and his dream was to play soccer professionally and maybe in Europe and all that. And so, FC Dallas literally came and recruited him, came to their house and it was just a very challenging thing because he was going to be going off in the eighth grade to this place developing.

“And so he’s been living in Dallas, literally since the eighth grade. And it’s amazing. So, I’m the only person on the planet that knew because he could bomb it 45 to 50 yards in the eighth grade. No one really knew because he has not played football. But he comes around and gets out there and plays around and kicks the ball and this and that. I mean it’s been amazing to watch him develop.

Clemson football should be okay on the kicking front, though, as the Tigers return their primary kicker from their run to the 2019 national championship game.  As a true sophomore last season, B.T. Potter made all 79 of his point-after attempts and 13 of his 21 field-goal tries.

It was quite the day on the kicking front for the Nebraska football program. And not in a good way.  At all.

Thursday, it was reported that Barrett Pickering was no longer a part of the Nebraska football team.  The placekicker subsequently confirmed that he was stepping away from the sport because of health concerns.  Pickering will, however, remain on scholarship as a student at the school.  The Alabama native won’t count against the 85-man scholarship limit for Nebraska football.

Not long after the news of Pickering’s decision broke, it was also confirmed that kicker Matt Waldoch will not be returning to the program as well.  The reason?  Club soccer.

The twin departures leave Nebraska football very thin at the position.  At least, experience-wise it does.

As a true freshman in 2018, Pickering served as the primary placekicker for Nebraska football.  That season, he hit on 14 of his 18 field-goal attempts (77.8 percent) and missed just one of his 41 point-after attempts. Pickering did not miss over the final six games, going 25-of-25 on extra points and 9-of-9 on field goals.

During that stretch, he accounted for all nine points (three field goals) in a 9-6 win over Michigan State.  That was the first time Nebraska football won without scoring a touchdown since 1937.

Despite that momentum, Pickering’s 2019 season was essentially a wasted year.  The Alabama native missed the first seven games last season because of an unspecified injury.  When he returned, he went 3-of-5 on field goals and was successful on all 10 extra points.

By the end of the year, though, Waldoch, an in-season tryout player off the club soccer team, had become the Cornhuskers’ primary kicker.

With Pickering exiting the program, Waldoch would’ve entered the spring as the favorite to win the job.  Waldoch didn’t miss a kick this past campaign, connecting on four field-goal and nine point-after tries.

Nebraska football will enter spring practice with three non-scholarship options at the position: redshirt freshman Gabe Heins, junior-college transfer Chase Contreraz and true freshman Tyler Crawford.  Contreraz will head into the spring as the favorite to win the job.