Late last night, Dabo Swinney took home honors as the Bear Bryant Coach of the Year.  A day later, a player who was instrumental in the Clemson head coach’s 2015 success has been honored as well.

The Allstate Sugar Bowl announced Thursday that true sophomore Deshaun Watson has been awarded the Manning Award, given annually to the nation’s top quarterback.  The award, named in honor of the quarterbacking Mannings — Archie, Peyton and Eli — is the only one to take into account a player’s performance in the postseason.

“We are honored to present this year’s Manning Award to Deshaun Watson,” Archie Manning said in a statement. “Deshaun led his team to a perfect regular season and then an impressive win in the Playoff Semifinal before his 478-yard performance in the national championship. He may not have won the title but he showed the world what an outstanding talent he is and what a tremendous competitor he is.”

Cook is widely expected to be a first-round draft pick in the 2016 NFL Draft, and because he is coming back from a shoulder injury it was not a shock to see Cook choose not to participate in the Senior Bowl. He will have a chance to make up for his Senior Bowl absence in a pro day event later as well as the NFL scouting combine in Indianapolis later this winter.

Allen will now have a chance to take advantage of the Senior Bowl opportunity. The Senior Bowl is the highest-regarded all-star event that will be attended to by members of every NFL Franchise, including many head coaches in addition to scouts. What happens in Senior Bowl practices can help some prospects show off some positives that may be overlooked otherwise.

Other quarterbacks scheduled to appear at the Senior Bowl are Jacoby Brissett of NC State, Jake Coker of Alabama, Jeff Driskel of Louisiana Tech, Kevin Hogan of Stanford, Cody Kessler of USC, Dak Prescott of Mississippi State and Carson Wentz of North Dakota State. Remember that only seniors are eligible to attend the Senior Bowl, so many of the quarterbacks in the NFL Draft pool like Cal’s Jared Goff, Ohio State’s Cardale Jones and Penn State’s Christian Hackenberg are not allowed to be extended an invitation.

Mississippi State closed one of the most successful runs in program history by dominating NC State 51-28 in the Belk Bowl Wednesday evening in Charlotte.

The star, as he has been so many times over his career, was Mississippi State quarterback Dak Prescott. After Wolfpack quarterback Jacoby Brissett was intercepted by Mississippi State’s Gerri Green on the first snap of the game, Prescott capped the Bulldogs’ 26-yard opening drive by finding Fred Ross for a 14-yard touchdown.

Brissett was intercepted again 10 minutes later, and again Prescott capitalized, this time hitting De’Runnya Wilson for a 39-yard gain and then a 28-yard touchdown.

Ross raced in from 33 yards out on the Bulldogs’ next possession, giving Mississippi State a 21-0 lead at the 12:17 mark of the second quarter.

NC State got off the floor with a pair of consecutive touchdowns — an 82-yard connection from Brissett to Pharoah McKever and a 48-yard Jaylen Samuels dash — but Mississippi State answered when Justin Malone hopped on the loose pigskin as Prescott rushed into the end zone.

Westin Graves knocked in a 39-yard field goal just before the end of the half, giving the Bulldogs a 31-14 edge and effectively putting the game out of reach.

Brissett posted a three-yard touchdown run midway through the third quarter, but Prescott found Brandon Holloway for a pair of touchdowns, from 10 and 55 yards out, and Aeris Williams raced in for a 33-yard touchdown, pushing the advantage from 31-21 to 51-21. Samuels added a cosmetic one-yard plunge with 45 seconds remaining to complete the scoring.

For the day, Prescott hit 25-of-42 passes for 380 yards with four touchdowns and one interception while rushing 12 times for a team-leading 47 yards and one near touchdown. Wilson snatched five balls for 96 yards and a score, Holloway posted four grabs for 78 yards and two scores, and Ross finished his career with seven receptions for 74 yards and a score.

Prescott closes his career with two First Team All-SEC nods, a 23-10 record, 114 touchdowns responsible for, and status as one of only four players in FBS history to record at least 9,000 passing yards and 2,500 rushing yards.

The win gave Dan Mullen a 55-35 mark in seven seasons at Mississippi State and 19-7 with, most likely, two AP top-25 finishes over the past two seasons. The win pushed the Bulldogs to 9-4 on the season, giving the program back-to-back nine-win season for the first time ever.

NC State closed the year at 7-6. Dave Doeren closes his first three years in Raleigh at 18-20, compared to the 24-14 mark Tom O’Brien recorded in his final seasons before his 2012 firing.

Taking a quick-hit look at the Dec. 30 bowl menu, which features seven Power Five teams, including a pair of ACC-SEC matchups.

WHO: Auburn (6-6) vs. Memphis (9-3)
WHAT: The 10th Birmingham Bowl
WHERE: Legion Field, Birmingham, Alabama
WHEN: Noon ET, ESPN
THE LINE: Memphis, +3
For the remainder of an extended preview, click HERE.

WHO: North Carolina State (7-5) vs. Mississippi State (8-4)
WHAT: The 14th Belk Bowl
WHERE:
WHEN: 3:30 p.m. ET, ESPN
THE SKINNY: If you’re a fan of multi-dimensional quarterbacks, this matchup is one helluva way to close out 2015.  Mississippi State’s Dak Prescott is 26th nationally in passing efficiency while his counterpart, North Carolina State’s Jacoby Brissett, is sixth in the ACC in that very category.  Prescott also leads his team in rushing, while Brissett is fourth on the Wolfpack on the ground.  If you’re the opposing secondary and looking to get the ball back via a turnover good luck as the two quarterbacks have combined to throw eight interceptions — four apiece — in 802 attempts this season.  Should MSU grab its fourth bowl win (in six tries) under Dan Mullen, it would mark the first time in the football program’s history that the Bulldogs have won nine or more games in back-to-back seasons.  An NCSU win would give Dave Doeren eight wins for the second time in his first three seasons, the first Wolfpack coach to pull off that trick his first three seasons since Chuck Amato in 2000 (8-4) and 2002 (11-3).  And a factoid that might only interest me?  The Wolfpack’s last bowl win against a team from the SEC came back in 1994 against… the Starkville Bulldogs.  That said, history likely won’t repeat itself as MSU is playing for the beloved Prescott and wants desperately to send the senior out on a winning note.  That emotion should prove to be the difference, especially in a game that could very well be decided by the two opposing offenses.
THE LINE: North Carolina State, +6
THE PREDICTION: Mississippi State 48, North Carolina State 45

WHO: Texas A&M (8-4) vs. Louisville (7-5)
WHAT: The 18th Franklin American Mortgage Music City Bowl
WHERE:
WHEN: 7 p.m. ET, ESPN
THE SKINNY: The biggest question mark surrounding this game is what exactly Texas A&M will get under center.  A&M has already seen the quarterback who began the 2015 season as the starter decide to transfer… and then watched as the player who finished the 2015 season as the starter bolt as well.  With Kyle Allen (the former) and Kyler Murray (the latter) gone, enter Jake Hubenak, he of the stat line that includes 12-of-27 passing for 92 yards and a touchdown in his career.  Conversely, Louisville is very stable at the position for the foreseeable future as true freshman Lamar Jackson has grabbed the job by the throat, becoming one of just a handful of FBS quarterbacks to lead his team in passing and rushing.  The much-improved Aggies defense, though, has shown the ability to contain running quarterbacks this season, although the Prescott mentioned up above did manage 96 yards in a losing effort in early October.  And then there is sophomore Myles Garrett, the Aggies defensive end who is tied for sixth nationally with 11.5 sacks and could prove to be a very disruptive force for such a young player.  With a win, the Aggies will extend their bowl winning streak to five straight… a skein that comes on the heels of losing five in a row.  The U of L could end their 2015 season with back-to-back wins over teams from the SEC for the first time in program history, and could also beat a team from that conference in a bowl game for the first time since 1990 (Alabama, Fiesta Bowl).  One final note: expect Kevin Sumlin‘s name to be very much a part of the NFL coaching carousel once the final gun sounds on this game, regardless of whether the Aggies win or lose.
THE LINE: Texas A&M, +4½
THE PREDICTION: Louisville 27, Texas A&M 26

Not surprisingly, one of this year’s four playoff participants is very well represented on its conference’s all-league team.

The SEC released its first- and second-team all-conference teams Tuesday afternoon, with Alabama pacing all schools with 10 players total on the two squads.  The 10 selections are the most since the Tide garnered 11 in 2011.

Seven of UA’s All-SEC selections were first-teamers. Florida was next with three first-team selections, while six teams had two apiece: Arkansas, LSU, Mississippi State, Ole Miss, South Carolina and Texas A&M. Kentucky was the only team that failed to place a player on the first-team; in fact, UK failed to place a player on either team, an indictment of a coaching staff that has consistently brought in high-rated classes.

Both Ole Miss and Texas A&M had five second-teamers. Those two also had the second-most overall selections with seven each. 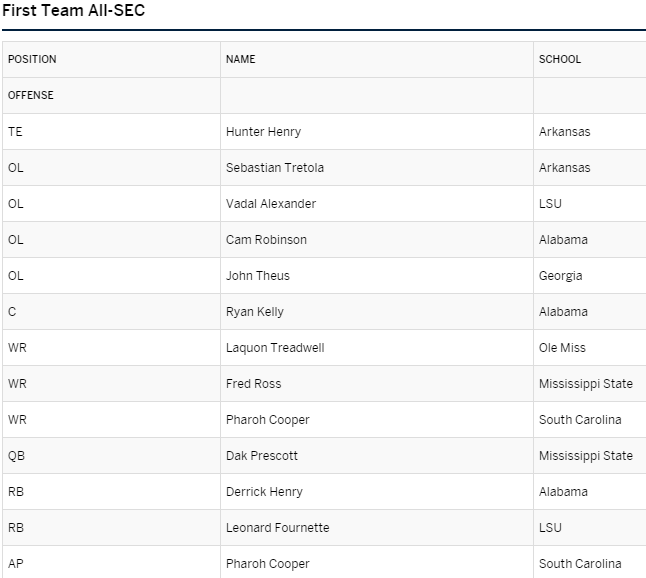 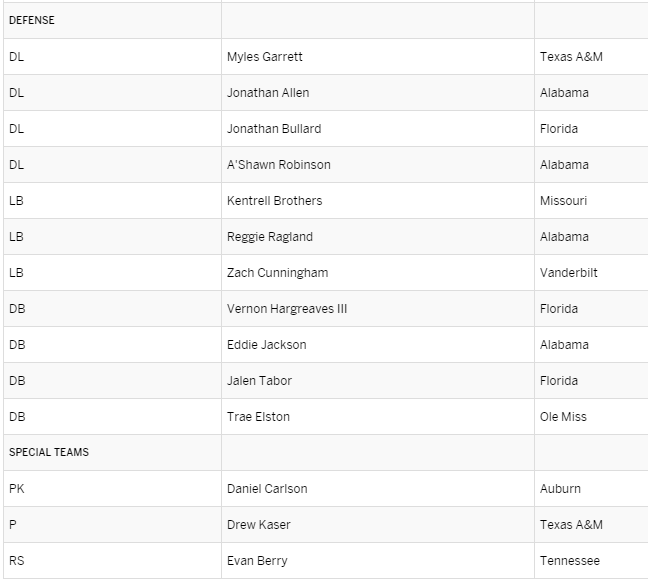 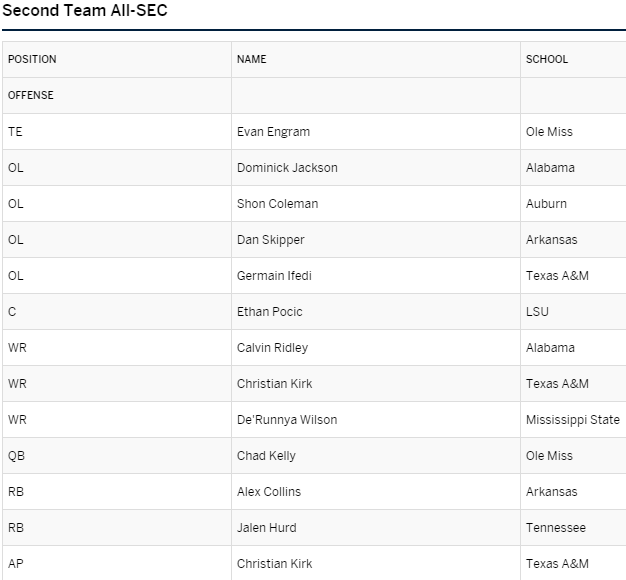 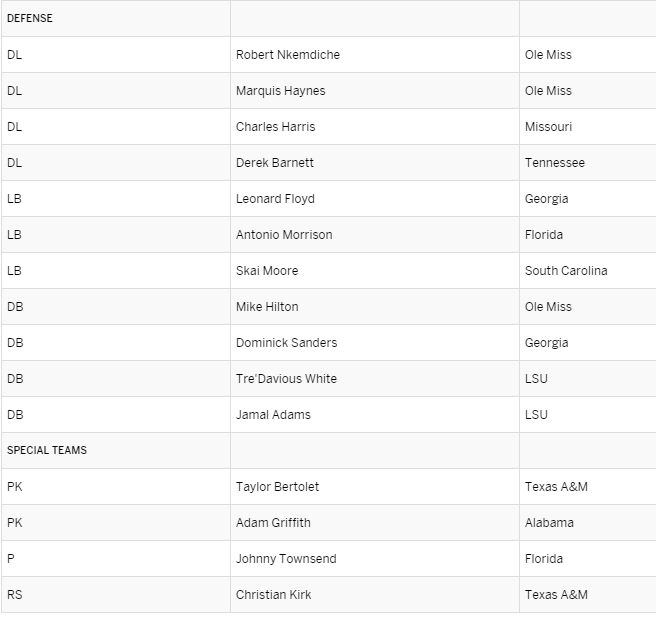