As if having no. 1 Alabama vs. No. 3 Florida State in a season-opening contest was not enough to highlight the first full weekend of college football, the game will also welcome a pair of Heisman Trophy winners to serve as honorary team captains.

Jameis Winston will be an honorary captain for the Chick-fil-A Kickoff representing Florida State. On the other side of the field with Alabama will be another former Heisman Trophy winner, Derrick Henry.

Winston, a native of Alabama, played a signature role in leading Florida State to its most recent national championship. The 2013 Heisman Trophy winner guided Florida State to the last of the BCS national championships and led the Noles to the inaugural College Football Playoff, where they were eliminated by Oregon. Winston went on to become the No. 1 overall draft pick in the 2015 NFL Draft by the Tampa Bay Buccaneers, where he currently is the franchise quarterback heading into the new season.

Henry, a native of Florida, was a member of Alabama’s College Football Playoff national championship team in 2015 and a two-time SEC champion. Henry became Alabama’s second all-time Heisman Trophy winner in 2015, and he took home a number of other awards including the Maxwell Award, Walter Camp Award, and Doak Walker Award. Henry currently plays in the NFL with the Tennessee Titans, with another former Heisman Trophy winner (Marcus Mariota).

Christian McCaffrey will declare for the NFL Draft, according to a report from Matt Miller of Bleacher Report.

McCaffrey, of course, offers a different skill set than those two and any other running back. Just as much a threat catching the ball or as a returner, McCaffrey set the FBS single-season all-purpose yardage record — rushing for 2,019 yards and eight touchdowns, receiving for 645 yards and five scores, accumulating 1,070 kick return yards with one touchdown and returning punts for 130 yards and a touchdown. He finished runner-up to Derrick Henry in the Heisman Trophy voting while leading Stanford to the Pac-12 championship and a Rose Bowl victory.

Christian McCaffrey will declare for the NFL Draft, sources tell @nfldraftscout; the Stanford RB is seen as an early round lock pic.twitter.com/DAb0MUzdXB

This season, McCaffrey’s profile dropped as Stanford dropped from the national title conversation, but he actually improved as a running back. McCaffrey’s averages jumped in both yards per game (145.1 vs. 144.2) and yards per carry (6.3 vs. 6.0).

Assuming he does indeed declare, McCaffrey will wrap up his Cardinal career as Stanford faces North Carolina in the Sun Bowl (2 p.m. ET Dec. 30, CBS).

With five weeks remaining in the regular season, all signs point to Louisville quarterback Lamar Jackson as the overwhelming favorite to take home the 2016 Heisman Trophy.  There are still at least two players, though, who could have a significant say in the stiff-armed race before it’s all said and done.

In early October, Jabrill Peppers, Michigan’s do-it-all, all-purpose star, was 33/1 to win the 2016 Heisman according to Bovada.lv.  Last week, those odds dropped to 15/2; this week, coming off yet another highlight-filled performance,they’ve shortened even further and now stand at 9/2.

That’s 15/2-to-9/2 move is the same one-week move as Clemson quarterback Deshaun Watson, although both still lag significantly behind Jackson at 1/3.  The sophomore was at 1/3 a week ago as well.

To put the current state of the race into perspective, at this time last year the ultimate winner of the 2015 Heisman, Alabama running back Derrick Henry, stood at 2/5. Watson, another finalist for last year’s award, was at 3/1. Stanford running back Christian McCaffrey, the third finalist and runner-up to Henry, was a longshot at 50/1.

As the Lamar Jackson Heisman hype train hurtles down the tracks, at least one wagering establishment has wholeheartedly hopped aboard.

In its latest set of odds released Tuesday afternoon, Bovada.lv has pushed the Louisville quarterback to its pole position for the 2016 Heisman Trophy.  In fact, Jackson, whose 18 touchdowns this season are more than all but seven teams have scored through three weeks, is the site’s overwhelming favorite at 1/2 after being at 6/1 just one week ago.

The Sept. 13 favorite, Clemson quarterback Deshaun Watson, has gone from 5/1 to 8/1.  Stanford running back Christian McCaffrey (9/2) has slightly longer odds at 11/2, while Ohio State quarterback J.T. Barrett held steady at 6/1.

Greg Ward Jr. saw one of the biggest surges as the Houston quarterback went from 25/1 a week ago to 16/1.

Two players that were off the board last go ’round were added: San Diego State running back Donnell Pumphrey (25/1) and Washington quarterback Jake Browning (40/1).  A handful of players were taken off the board, most notably quarterbacks Chad Kelly (Ole Miss), Baker Mayfield (Oklahoma) and Josh Rosen (UCLA).

Below is the complete list of Heisman Trophy odds, again courtesy of Bovada.lv: 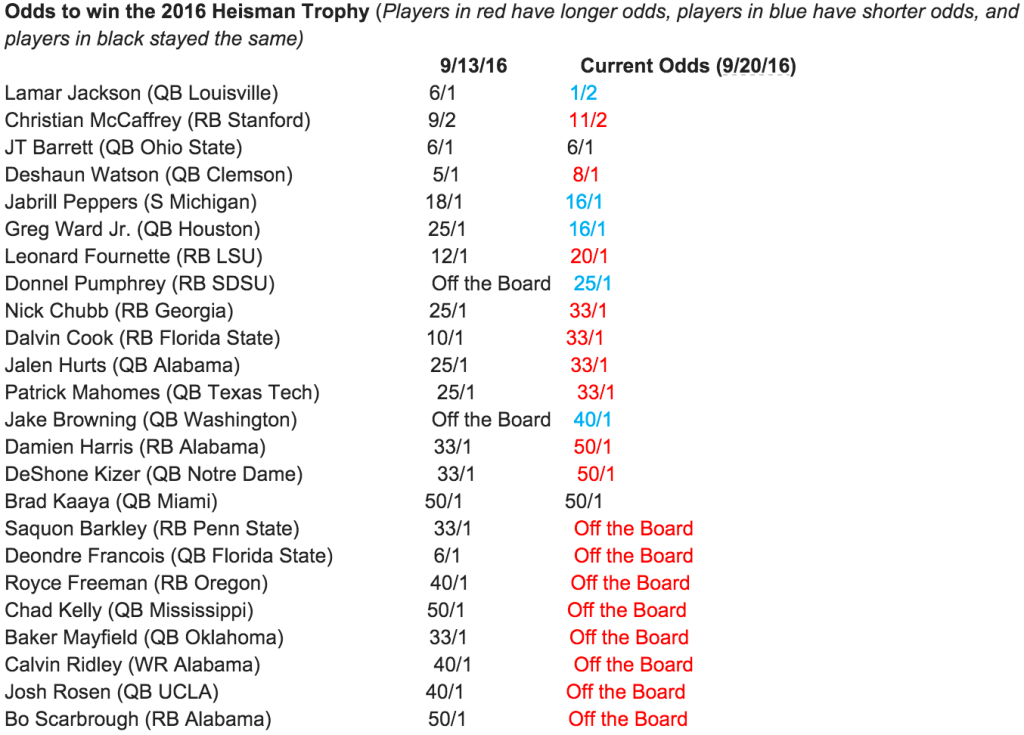 With 2015 winner Derrick Henry of Alabama off to the NFL, there will be a new winner of the Doak Walker Award in 2016.  Based on the projected performances of a couple of other finalists from a year ago, this year’s winner could very well come from the group below.

Thursday, the PwC SMU Athletic Forum announced a watch list that contains a whopping 76 players.  The Walker Award has ben handed out annually since 1990 to the nation’s top running back and is named in honor of former SMU great Doak Walker.

Two finalists for last year’s award have made the cut this preseason — LSU’s Leonard Fournette and Stanford’s Christian McCaffrey.

Those two independents were two of the 13 schools with two running backs listed, the others being Alabama, Arkansas, Baylor, Cal, Duke, Georgia, Tennessee, Texas, USC, Western Kentucky and Western Michigan.

Below is the complete 2016 Doak Walker Award preseason watch list: 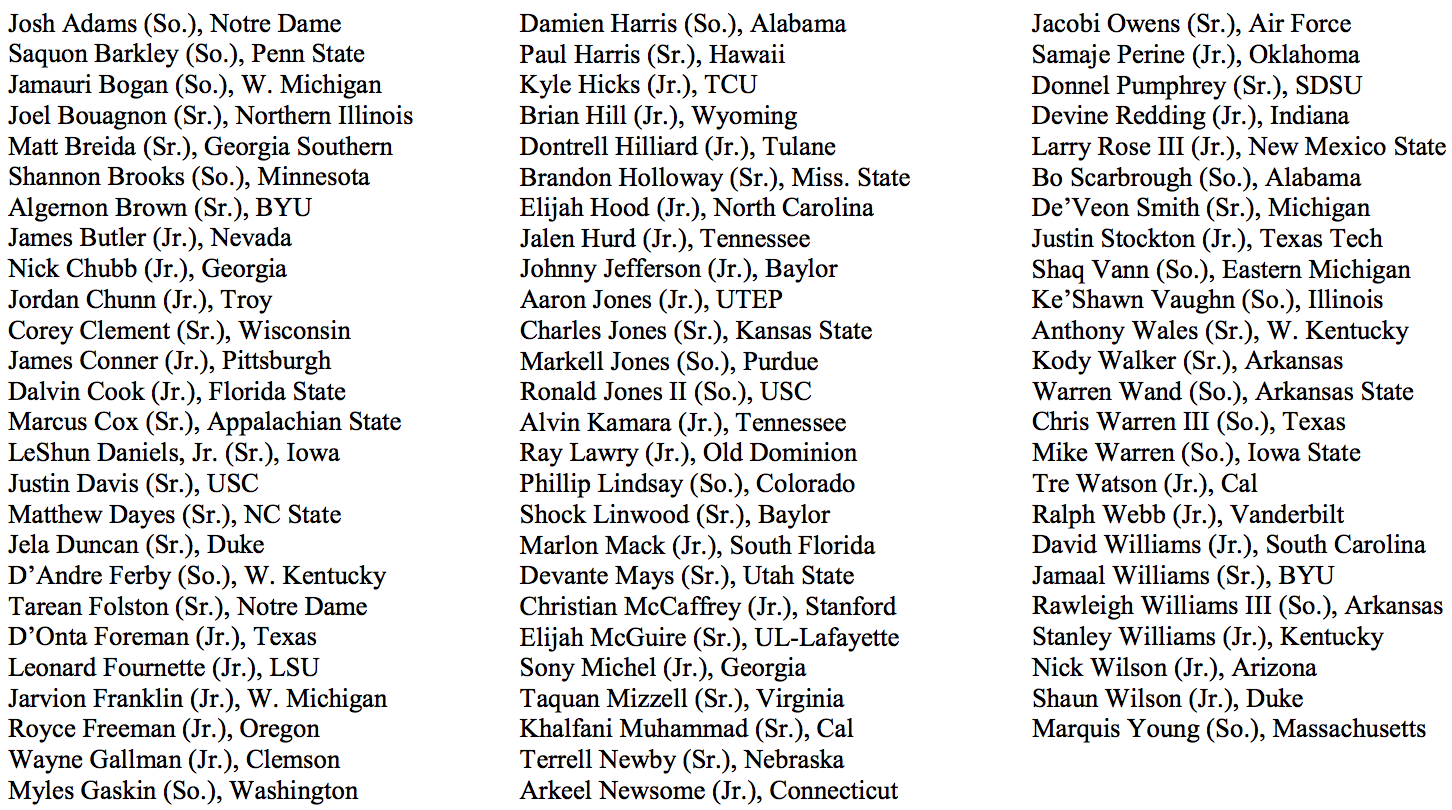 Derrick Henry and Keenan Reynolds are finalists for Sullivan Award March 18, 2016 10:16 am