It was a rematch 57 years in the making and both sides wanted to soak up every extra moment. New Mexico State ended the NCAA’s longest bowl drought in dramatic fashion to beat Utah State 26-20 in overtime on Friday night in an Arizona Bowl full of the highs and lows of college football.

In front of what seemed like half of Las Cruces at the home stadium of the Arizona Wildcats in Tucson, the Aggies put behind several quarters of offensive malaise by marching 69 yards midway through the fourth quarter to tie the game on an incredible Jaleel Scott catch in the end zone. The NMSU defense came up with a stop in the extra period not long after and a missed field goal by USU was just the opening the team needed before running back Larry Rose III burst up the middle for a 21 yard touchdown that set off pandemonium in the stands.

.@NMStateFootball wins it in OT!

They capture their first bowl win in 57 years at the @novaAZBOWL! pic.twitter.com/XozLdadeC8

The victory not only gave the Aggies of New Mexico State their first win in the postseason since 1960 — which happened to be a 20-13 defeat of Utah State in the Sun Bowl — but capped off a pretty incredible story for one of the smallest programs in all of FBS. Rose finished the game with 142 yards on the ground and was the team’s leading receiver in the game as well. His running made up for a rather lackluster offensive day for quarterback Tyler Rogers (191 yards, one TD, two INTs) and company as the group had eight 3-and-outs against one of the better secondaries at the Group of Five level.

While those long stretches without points or any kind of offensive production made things hard to watch at times in this one, there was at least plenty of excitement early in the first quarter when Utah State’s Savon Scarver (96 yards) and NMSU’s Jason Huntley ran back-to-back kickoffs for touchdowns not five minutes in.

The loss caps off another tough season for Matt Wells’ Aggies after they led in just about every statistical category but saw kicker Dominik Eberle make only two of his six field goal attempts to let a win slip through their fingers. QB Jordan Love (254 yards passing) and RB LaJuan Hunt (133 yards rushing, 1 TD) both had decent outings but it wasn’t enough as points came at a premium for both sides.

The game also marks the end of an era for New Mexico State as it was their final contest as a member of a conference — in this case the Sun Belt. The program will operate as a football independent in 2018 and, funny enough, will play Utah State again next September up in Logan. Something says both sets of Aggies will have plenty to play for when that one rolls around in what should be a fun footnote to a long, long drought being emphatically ended on Friday.

New Mexico State waited 57 years to return to the postseason and it’s pretty clear the team were fired up to play in the Arizona Bowl as they took a 13-all tie into halftime with their fellow Aggies of Utah State on Friday evening in Tucson.

It didn’t take long at all for NMSU to get on the board, as they marched right down the field for 91 yards on their first drive in the postseason over five decades before eventually settling for a short field goal.

Utah State responded however, needing just 14 seconds to take the lead back after Savon Scarver returned the kickoff 96 yards to the house. Not to be outdone, the other Aggies decided to play a little ‘Anything you can do, I can do better’ apparently. That’s because Jason Huntley followed the play up with a full 100 yd kickoff return touchdown to make it back-to-back and put his team back in the lead.

Things settled down in the game after that brief bit of excitement as both sides exchanged field goals down the stretch and both defenses appears to find their legs.

USU signal-caller Jordan Love found some success through the air with 136 yards on 24 attempts through two quarters but it was mostly the result of the Aggies ground game unable to find much after five different players recorded a carry but could only muster 45 yards.

New Mexico State was much better in that department as tailback Larry Rose III averaged just over eight yards a carry and had 66 total yards going into the break. He formed a nice balanced attack with quarterback Tyler Rogers, who had 82 yards in the air but did toss an interception.

Given some of the skill position players involved in this game you probably could have expected a few more points in the first half but there’s still plenty of time left in one of the few remaining non-New Year’s bowls left on the docket between a pair of Aggies hoping to grab one more win in 2017.

5 — Blocked kicks (punts, point afters, field goals) for both Illinois and Temple this season, the most of any FBS team.

10 — Number of players who both caught passes and had at least one carry in Michigan’s romp over Rutgers. 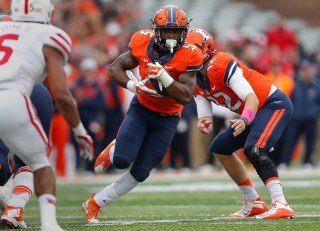 25 — With Frank Beamer retiring at Virginia Tech, and provided he doesn’t do the same, Kansas State’s Bill Snyder will be the longest-tenured FBS head coach at the same school at a quarter of a century next season.  Iowa’s Kirk Ferentz and Oklahoma’s Bob Stoops would be next at 18 years, followed by TCU’s Gary Patterson at 16. 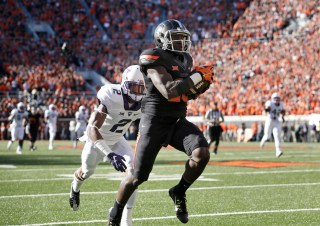 77 — Consecutive games for Oregon in which they’ve thrown a touchdown pass, extending their own FBS record.  Texas Tech (2006-11) had held the previous record at 69 straight before it was broken by the Ducks earlier this year.

207 — Rushing yards for New Mexico State’s Larry Rose III in a win over Texas State, giving him back-to-back 200-yard games and three on the season. 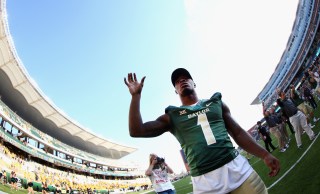 268 — Yards rushing and passing Temple accumulated in rolling up 536 yards of offense in a 60-40 win over SMU Friday night.

404 — Yards passing for North Carolina’s Marquis Williams against Duke in the first half.  Williams would finish with a school-record 494 yards, and set another program standard with 524 yards of total offense.

442 — Career-high passing yards for Brandon Allen in Arkansas’ overtime win over Ole Miss.  Is was the second 400-yard game of Allen’s career, both of which have come this season. 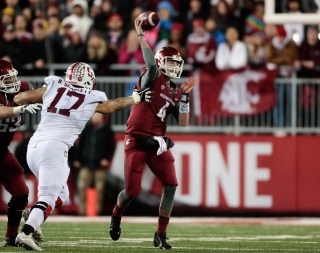 711 — Yards of total offense for Western Michigan in Thursday’s 54-7 win over Ball State, breaking the school single-game record.  The total is the most by a MAC team this season and the seventh-most in conference history.

1937 — Last year North Carolina State had beaten Boston College in Chestnut Hill prior to Saturday’s 24-8 road win.  NCSU had previously lost six in a row at BC. 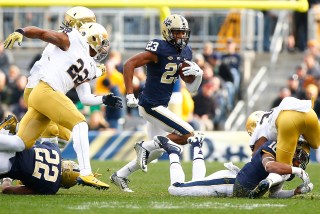 9,200 — Number of songs downloaded onto TCU head coach Gary Patterson‘s iPod, at least according to that school’s sports information department.

35,050 — Amount, in dollars, of the highest current bid in an auction for a Leonard Fournette game-used jersey and a pair of game-used helmets signed by Les Miles and Steve Spurrier.  The opening bid, incidentally, was $7,000.  All of the money raised in the auction will go toward the South Carolina flood relief effort.