All three of whom are now at Wisconsin.

So, naturally, James is now set to join them. The rising junior has planned to transfer to Wisconsin for months, and on Thursday received confirmation he’d been admitted to the Big Ten school.

Officially a Badger !! 🔴⚪️🔴⚪️. Words can't even describe how happy and grateful I am.

“Coach Settle sent me a text, saying ‘welcome to the Badger family,’” James told Badger Nation. “I am really excited. It’s definitely been a long journey.”

James said, naturally, that his childhood love for the Badgers combined with his former coaches now employed in Madison drew him to Wisconsin. The presence of Ron Dayne, Montee Ball, Melvin Gordon and a handful of other 1,000-yard backs couldn’t have hurt, either.

“It was funny because everybody who I knew was wearing red now,” James said. “It was kind of weird but I’m glad I got to chance to go back up there. Things really haven’t changed that much. Stepping into Camp Randall, I got chills, man. As crazy as it feels, it felt like home.”

James rushed 87 times for 437 yards and four touchdowns as a freshman in 2014, and accumulated 56 carries for 253 yards last season.

Two of Wisconsin’s top three running backs will be seniors this fall, so James figures to be a regular in the Badgers’ running back rotation when his eligibility resumes in 2017.

Limited to only three games by a sports hernia injury, most pegged Wisconsin running back Corey Clement to return in 2016.

Still, nothing’s official until it’s official, and Clement made his return official on Tuesday, telling Wisconsin running backs coach John Settle he will indeed suit up for the Badgers next season.

“He knows he can’t leave,” Settle told the Milwaukee Journal-Sentinel. “I was relieved because as a coach you don’t want to see a guy make a bad decision.

“The fact he wasn’t healthy and struggled through the year…you look at his body of work and you say it would be great if you could come back and stay healthy and carry the load.

“So I was happy to hear that. And if he wants to make a Heisman run, he knows what he has to do.”

Clement picked over Melvin Gordon‘s leftovers in 2014 and still nearly rushed for 1,000 yards, following Gordon’s 2,587 yards and 29 touchdowns with 949 yards and nine scores on 147 totes. But an injury-plagued 2015 campaign saw Clement rack up only 29 carries for 155 yards and four scores.

He only looked and played like himself once this fall – a 11-carry, 115-yard, three-touchdown effort against Rutgers on Oct. 31.

The good news? Pairing a hopefully healthy Clement with returning runners Dare Ogunbowale and Taiwan Deal should give Wisconsin its typically-formidable ground attack in 2016.

Landslides have reigned each of the past two years when it came to the most prestigious trophy in all of college sports. In 2015, it was the exact opposite.

In one of the closest votes in the award’s history, Alabama running back Derrick Henry has been selected as the 81st winner of the Heisman Trophy over fellow finalists Christian McCaffrey (running back, Stanford) and Deshaun Watson (quarterback, Clemson). Henry is the second Tide player so honored, joining fellow running back Mark Ingram back in 2009.

Congrats @KingHenry_2!! Welcome to the #Heisman brotherhood! Glad we hold down the 2 heismans in ttown! You deserve it bro! #RollTide

Henry’s 1,986 rushing yards are the most by a Heisman-winning back since Ricky Williams won with 2,124 yards in 1998, while his 23 touchdowns are the most since Williams’ 27 in 1998. Interestingly, he’s just the third player from the state of Florida to win it.

Then there’s this nugget from our old pal Chris Huston:

Clemson remains one of nine ACC teams to never have won the Heisman.  Stanford’s last — and only — Heisman came courtesy of Jim Plunkett way back in 1970.

The SEC now has 14 Heisman Trophy winners in its history (total of all current members), second only to the Big Ten’s 18.  The Big 12 has 12, while the Pac-12 has 11.  The ACC, with nine, is the only Power Five conference not in double digits.

Below are the final vote totals for the Top 10 in this year’s voting for the Heisman Trophy, with Navy quarterback Keenan Reynolds finishing a surprising fifth and Florida State running back Dalvin Cook finishing an inexplicable seventh.

Also of note?  Michigan State quarterback Connor Cook and TCU quarterback Trevone Boykin received the most votes for a senior outside of Reynolds — and they were tied for ninth behind four sophomores and three juniors. 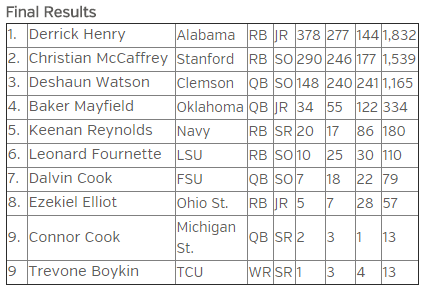 An off-field incident will reportedly sideline Corey Clement for what’s expected to be his final regular season game in a Wisconsin uniform.

Earlier this week, the running back was charged with two counts of disorderly conduct following an incident earlier this month.  The initial details had Clement attempting to break up a fight between the security guard at his off-campus residence and a group of individuals, which proved to be a false narrative as Clement was found to have thrown the first punch.

Because of the charges, the Milwaukee Journal Sentinel is reporting, Clement will not travel with his teammates for Saturday’s game against Minnesota.  There’s no word on his status for the Badgers’ bowl game.

This has essentially been a lost season for Clement, who came into the the year as one of a handful of Heisman favorites.

The junior struggled in the season-opening loss to Alabama because of an injury that was later determined to be a sports hernia.  He missed the next seven games, came back for one game late last month (115 yards, three touchdowns in win over Rutgers), but then aggravated the injury and missed the Nov. 7 Maryland game as well.  He played in last weekend’s loss to Northwestern, but was held to just 24 yards on 10 carries.

For the season, Clement has rushed for 155 yards and four touchdowns on 29 carries, one year after 949 yards and nine touchdowns as Heisman runner-up Melvin Gordon‘s primary backup.

One former and three current Heisman front-runners headline the the 11-player-strong list of semifinalists for the Doak Walker Award, the PwC SMU Athletic Forum announced Wednesday.

Of the 11 semifinalists, 10 come from a Power Five conference or Notre Dame.  The only Group of Five player up for an award handed out annually to the nation’s top running back is Wyoming’s Brian Hill.

There are three running backs generally considered as the favorites for this year’s Heisman Trophy — Florida State’s Dalvin Cook, Ohio State’s Ezekiel Elliott and Alabama’s Derrick Henry.  LSU’s Leonard Fournette was the stiff-armed front-runner for the first 10 weeks or so of the season.  Those four are Walker semifinalists, as is Stanford’s Christian McCaffrey, who’s on the periphery of the Heisman discussion as well.

Booker and Prosise are the only seniors in the group, while Collins, Elliott, Henry and Linwood are juniors.  The other five are sophomores.