Wisconsin reserve tight end Zander Neuville has been forced to retire from playing football, the senior announce don his Twitter account on Wednesday. Neuville’s retirement comes as an injury has become a serious enough of a problem that playing football is simply not worth the risk.

“Unfortunately, I have sustained another injury, one that means an end to my football career,” Neuville said in a statement. “I am extremely grateful for the opportunity I had this year and throughout my time at Wisconsin.”

Neuville appeared in three games for the Badgers in 2018, in which he recorded one catch for three yards. Zander ends his football career with 10 receptions for 84 yards and 2 touchdowns after battling injuries over the course of his time in Madison. Neuville suffered season-ending ACL injuries in both 2017 and 2018, one in each leg. He was granted a sixth year of eligibility last week.

Neuville announced he is preparing to begin medical school next fall.

The latest example of that phenomenon played out Thursday, with Wisconsin confirming that Neuville will miss the remainder of the 2018 season because of an unspecified injury to his left knee.  Per the school, the Badgers’ No. 1 blocking tight end sustained the injury during practice this week.

“That was unfortunate,” head coach Paul Chryst said. “Again, as a team, you’ve got to be able to overcome that, but you feel terrible for ‘Z’ and him having to go through that.”

Coach Chryst provides an update on the week, including unfortunate injury news regarding Zander Neuville pic.twitter.com/CZAtZCspYM

Neuville suffered a torn ACL in his right knee late in the regular season last year and missed the Big Ten championship game as well as the Orange Bowl win over Miami.  This year, Neuville suffered a right ankle injury in the Week 3 loss to BYU that lingered on into the Week 4 win over Iowa and contributed to him playing in just five snaps that game.  The Badgers are coming off their lone in-season weekend off.

A fifth-year senior, it appears highly unlikely that Neuville could successfully petition the NCAA for a sixth season of eligibility.

After starting 11 games last season, Neuville had started a pair of games this season.  He had one catch for three yards this season, and will, in all likelihood, finish his UW playing career with 84 yards and two touchdowns on 10 receptions. 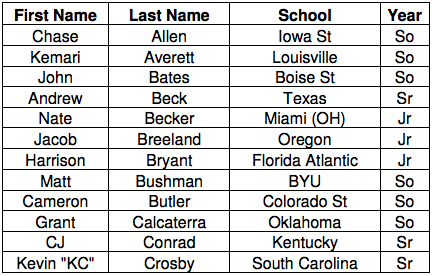