The Texas Longhorns won’t be the only school wearing a throwback style this weekend. Add Texas Tech and Rutgers to the mix of teams adopting a look that pays tribute to a certain era in program history.

Rutgers, the birthplace of college football, will be doing neer before seen in the modern era of college football. The Scarlet Knights will wear long-sleeve jerseys. The long sleeves mimic the style of uniform worn by the earliest college football players, although these uniforms will be made of a much more athletic material compared to the gear worn by those in 1869. The red long sleeve jerseys will be topped by a white helmet with a classic “R” logo. From head to toe, it is quite a unique look for the Scarlet Knights.

What does it mean to be first?@RFootball knows.

We tap into our roots this Saturday by donning long-sleeve uniforms, the first team in the modern era to do so, at the place where it all began 150 years ago. #TheBirthplace | Est. 1869 pic.twitter.com/L8O7CHWBXY

Texas Tech won’t be wearing long sleeves, but they will be wearing a look similar to the one worn during the bicentennial. The retro uniforms to be worn by Texas Tech this weekend take a page from the 1976 Red Raiders with a white helmet and red double-T logo, complete with red stars. Texas Tech claimed a Southwest Conference title in 1976, so the design choice is appropriate for the Red Raiders.

Been wreckin’. 🔴 The @TexasTechFB Red Raiders relive their Southwest Conference championship with a 1976 throwback. #CFB150 pic.twitter.com/ecUagOt5LG

Not to be forgotten, Boston College has been teasing its own throwback look for this weekend too. I’m just guessing it will be one Doug Flutie would appreciate.

Teams suiting up in uniforms designed to pay tribute to a previous generation of program history has been a thing for a while now, but it is great to see so many schools getting in on the fun in the 150th anniversary season of college football. Every team should make it happen.

But wait, there’s more! Boise State is going to wear a uniform similar to the one they wore during their Fiesta Bowl victory over Arizona in 2014.

C’mon Boise State. If you’re going to do a Fiesta Bowl throwback look, it is required by law that it must be the uniform worn in the win against Oklahoma.

(It’s this one. This is the Fiesta Bowl throwback uniform #BoiseState should be wearing) pic.twitter.com/BGVbbI4dQh

Today was the dawn of a new era for the Washington Huskies. A lucrative new 10-year contract with Adidas officially started today, July 1, as Washington is now officially no longer a Nike-branded school.

“We are very excited to kick off our partnership with Adidas, and I think our student-athletes and fans will appreciate the depth of thoughtfulness and commitment they have poured into these launch activations,” Washington Director of Athletics Jen Cohen said in a released statement. “Leading up to the partnership launch, Adidas has shown a huge appetite to listen and learn what makes Washington unique, and I believe that spirit will be reflected throughout all of these activations.”

Fans will have to let their imaginations run wild just a little longer before the first look at Washington’s new football uniforms are unveiled for the first time. The new football uniform will be unveiled on July 10. Don’t expect too many changes from Washington’s standard look and color scheme, but count on seeing some standard Adidas design elements implemented into the Husky uniforms. And of course, prepare for some sort of alternative uniform, although that may be held off for a later point in time.

Washington had been a Nike school since 1997 and the contract had been estimated to be valued at about $3.5 million per year. As previously reported, the contract with Adidas is valued at $119 million between how much cash Adidas will pay directly to the university, how much is reserved for product and marketing.

Just recently, Miami was among the schools partnering with Adidas to show off the brand new uniforms for the new college football season using an updated uniform template from Adidas. But Miami and Adidas had something special to reveal a little bit later.

On Monday, Miami pulled back the curtain on a brand new uniform that was designed to be environmentally conscious by using repurposed and recycled materials. The uniforms are in partnership with Parley For The Oceans, which focuses on protecting ocean water and raising awareness of how much plastic gets deposited in the oceans every year.

“Our players and staff are excited to wear the new Adidas Parley jerseys and gear for our season opener. We’re also excited that Adidas and Parley are teaming up with UM to help promote sustainability around the world,” Miami head coach Mark Richt said in a released statement. “Community service has always been an integral part of our football program, and this partnership with Adidas and Parley helps us continue those efforts.”

Built off the foundation of the new Adidas Primeknit template, Miami’s “The U’S” uniform is highlighted by an accented pattern on the numbering, sleeves, and pants. From a distance, you may not be able to tell the difference between this uniform and Miami’s standard home uniform. A closer inspection may be required to see the finer details of this particular design. 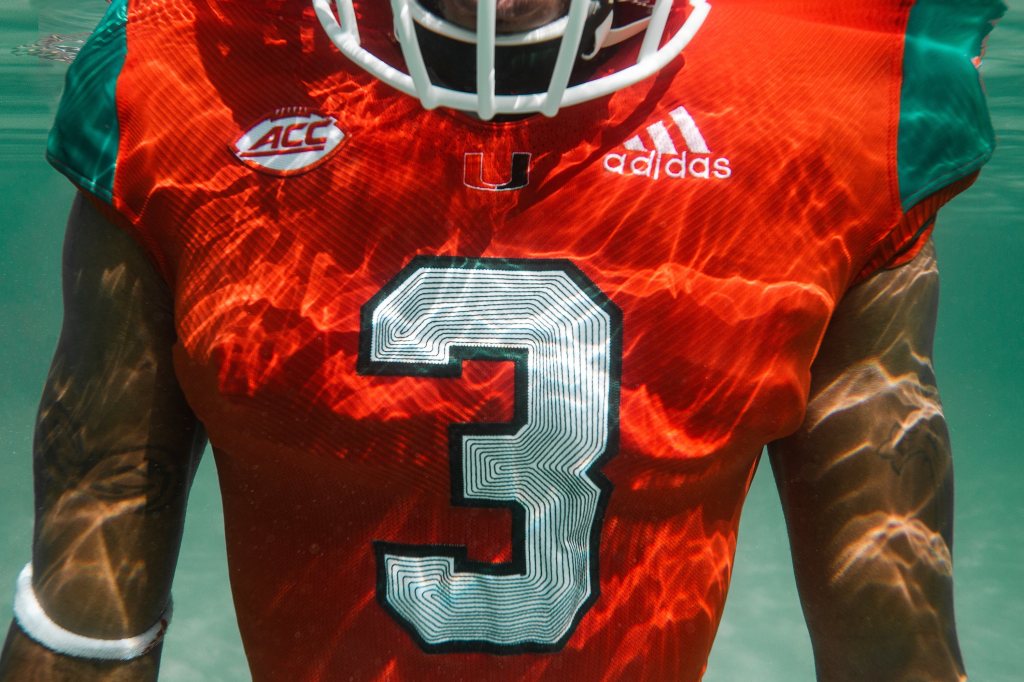 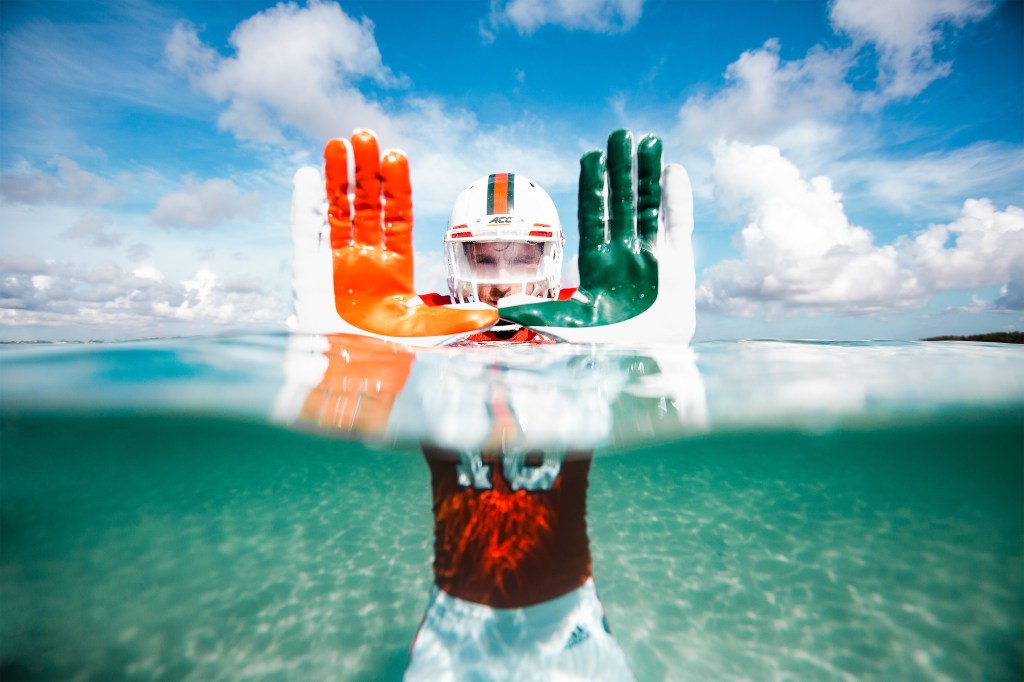 Miami will wear these special uniforms for the season opener on September 2 against LSU in Arlington, Texas. The uniforms will be auctioned off to raise money to support the Rosenstiel School of Marine and Atmospheric Science.

Today must have been reveal day for a handful of Adidas partners. Miami, Texas A&M, Nebraska, Louisville, and Kansas all showed off some first looks at their brand new uniforms to be worn for the upcoming college football season, all courtesy of uniform and apparel partner Adidas.

The new uniform design from Adidas is the Primeknit A1, which made its grand debut during the Army All-American Bowl in early January. Now, it will serve as the next leading uniform template for Adidas schools this college football season. As you may expect, the new design aims to improve mobility, flexibility and the ability to keep players as cool as possible to give teams an advantage on the field, especially when the temperatures are soaring early in the year. The jerseys feature a ribbed knit pattern on the chest and shoulder pads to allow for a better fit for the player, and a mesh texture is included to allow for better breathability and cooling zones. The inside of the jersey also features silicone grips to keep pads in place.

Judging from the first official looks of the new uniforms, there is good news in that none of the uniforms shown off today stray from the signature looks of each university football program. These uniforms all look the way they should for each school, although we can be sure there will be some alternate uniforms to come later on this season for most of, if not, all of these particular schools. But this reveal is more about the new design template, with the focus on providing the most advanced uniform design by Adidas yet.

👀 @adidasFballUS bringing the 🔥 with our new Primeknit #A1 unis for this season #RockChalk pic.twitter.com/W3fPEsOSUN

When it comes to the school-branded reveal videos, there wasn’t much to differentiate between the programs other than the uniforms themselves. Cue the standard uniform reveal beats!

Thumbs up, never cool down.

Other schools that will be wearing this uniform template include Arizona State, Georgia Tech, Indiana, Mississippi State, NC State, and Rutgers.

Arizona State will be one of many college football programs sporting a new uniform this season, and this one may be one of the best the Sun Devils have worn in some time.

With a first look showed off during Pac-12 Media Day this week, a couple of things stand out fairly quickly. First, there is no longer any wording on the front that reads “Arizona State” on the front of the jersey, just above the uniform number. That has been a signature uniform design element for about as long as many can remember, but it is now gone. But you do not need to look too closely to discover the newest uniform trait included in the Arizona State design. The state flag of Arizona is represented across the top of the jersey, blended so eloquently into the fabric of the jersey itself. You can see the new home jersey in this photo via Twitter.

If you need a visual reference, this is the state flag of Arizona. The home jersey includes the star in the middle of the jersey across the top of the uniform, and the stripes shooting out from it are also represented. In a sense, Arizona State and uniform partner Adidas are taking some inspiration from Maryland in finding ways to incorporate the state flag into the uniform, and this one works incredibly well.

You may be able to catch a glimpse of the new design in these videos from Pac-12 Media Day.

We’ll have to wait to see if this element makes it into the away jersey or any alternate designs sure to be lined up for this season, but this is one freaking good home jersey for Arizona State. It is so well done and it is not at all something that will distract any viewers watching an Arizona State home game this upcoming season.

And not to be overlooked is the tribute to former Sun Devil Pat Tillman. His initials and uniform number appear on a small patch at the bottom of the neckline.