Oklahoma State running back Chuba Hubbard became the second player in school history to break the 2,000-yard mark in a single season with a 16-yard run late in the second quarter of the Texas Bowl. Hubbard and the Cowboys lead Texas A&M at halftime of the Texas Bowl, 14-7.

Barry Sanders is the only other player in school history to rush for 2,000 yards in a single season, doing so for Oklahoma State during his magnificent 1988 season with 2,850 yards.

The game got off on the wrong foot for the Aggies when they fumbled away the football on the second play of the game. Although that led to a missed field goal by Oklahoma State, it was the Cowboys who built an early lead with back-to-back touchdown drives in the first quarter. Cowboys kicker Matt Ammendola has missed two field goals, allowing Texas A&M to hang closer on the scoreboard at the half.

Texas A&M’s only score came on a short run by Isaiah Spiller from the goal line. Quarterback Kellen Mond had a costly fumble at the end of an earlier red zone trip, losing the football at the five-yard line on a second down.

Throwback uniforms have been all the rage lately, and Oklahoma State is getting in on the fun this weekend. With their big game coming up against the Texas Longhorns, the Cowboys will be suiting up in a look inspired by the 1988 Heisman Trophy season of legendary running back Barry Sanders.

Oklahoma State is celebrating the 30th anniversary of the 1988 Oklahoma State team that went 10-2 and featured Sanders on his run to the Heisman Trophy. Sanders, who won the only Heisman Trophy in Oklahoma State history, rushed for 2,850 yards and 44 touchdowns. He and members of the “War Pigs” offensive line are grand marshalls for Oklahoma State’s homecoming parade this coming weekend.

The uniform, as expected, is perfect and should absolutely be given more opportunities to be worn by Oklahoma State. The uniforms will also include a patch commemorating the anniversary of Sanders’ Heisman Trophy season. 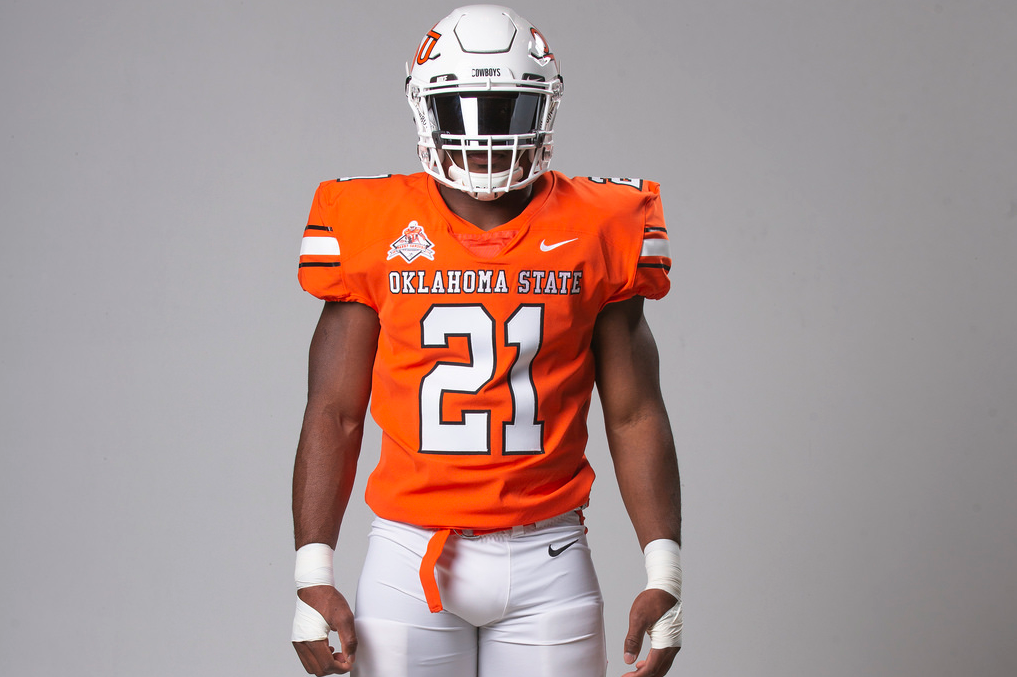 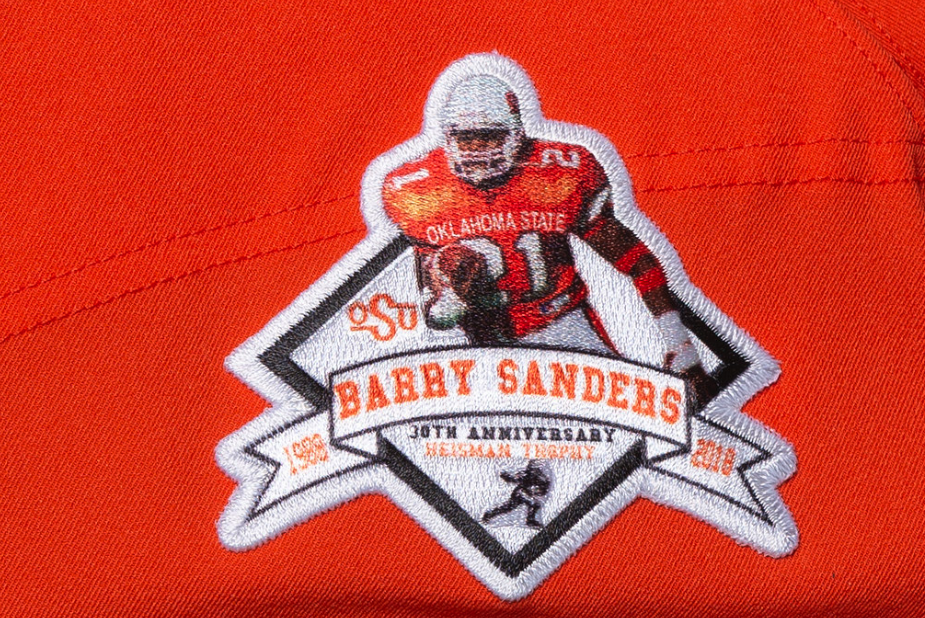 At 1-3 in the Big 12, Oklahoma State needs to go on a big winning streak and hope for some help if the Cowboys are going to play for the Big 12 championship. The Longhorns are sitting on top of the Big 12 standings with a conference record of 4-0.

On the eve of the Super Bowl, Carolina Panthers quarterback Cam Newton was named the Most Valuable Player of the National Football League. He is the first Heisman Trophy winner to win the NFL’s MVP award since Detroit Lions running back and former Oklahoma State star Barry Sanders was named the best player in the NFL in 1997. Sanders shared the MVP honors that season with Green Bay Packers quarterback Brett Favre, which means Newton is the first Heisman Trophy winner to be the outright winner of the NFL’s MVP award since 1985, when Los Angeles Raiders running back Marcus Allen won the award (Allen was a Heisman Trophy running back for USC in 1981.

Newton becomes the first quarterback to win the top honor at the college and NFL level and joins a short list by becoming the sixth player to receive both awards. Newton was a Heisman Trophy quarterback for Auburn during the 2010 season, in which he fueled a BCS Championship Run. Newton now can become the first player in football history to win the Heisman Trophy, a college national championship, NFL MVP and a Super Bowl. To do that, Newton will have to lead the Panthers past the Denver Broncos and Peyton Manning, who is perhaps one of the greatest quarterbacks of all time but was passed over for a Heisman Trophy by Michigan’s Charles Woodson in 1997 (Manning finished second in the voting that season).

It is somewhat amazing to think that grand slam of football has never been achieved once since the NFL MVP award was first awarded by the Associated Press in 1957, but it also goes to show that sometimes the best players in college and the NFL do not always achieve the top-level of championship success.

When Alabama running back Derrick Henry was named the winner of the 2015 Heisman Trophy Saturday night in New York City, the Crimson Tide star joined the exclusive fraternity of Heisman Trophy winners. This is often referred to as the most exclusive fraternity in sports, as only one player per year is inducted into the club every season since 1935. But Henry joined an even more exclusive club in college football history with his Heisman Trophy win by becoming the 22nd player to win each of the three major individual awards in college football; the Heisman Trophy, Maxwell Award and Walter Camp Player of the Year.

USC’s O.J. Simpson was the first player to win all three major awards in the same season, doing so in 1968. Simpson actually prevented UCLA’s Gary Beban from being the first triple crown award winner in college football when he was named the inaugural Walter Camp Award winner in 1967. Beban won the Heisman Trophy and the Maxwell Award that season. Stanford’s Jim Plunkett became the second player to sweep the three individual honors in 1970, and Penn State’s John Cappelletti swept the awards in 1973.

Henry is the fourth player from the SEC to win all three major awards, joining Georgia’s Herschel Walker, Florida’s Danny Wuerffel and Auburn’s Cam Newton. Henry is also the first running back to pull off the feat since Wisconsin’s Ron Dayne took all three honors in 1999. Ricky Williams of Texas did it the previous season in 1998 as well. Oregon quarterback Marcus Mariota won all three individual awards last season as well. Alabama’s A.J. McCarron prevented Florida State’s Jameis Winston from winning all three awards by being named the Maxwell Award winner in 2013. Alabama’s last Heisman Trophy winner before Henry, Mark Ingram in 2009, actually prevented Texas quarterback Colt McCoy from pulling off the triple award feat. McCoy won the Maxwell Award and Walter Camp Player of the Year awards in that 2009 season.

Anyone who watched No. 21 Stanford (3-1, 2-0 Pac-12) in the season opener at Northwestern may have thought the Cardinal were in for a long season with no offense to show for it. How quickly Stanford has turned things around now with two straight wins in Pac-12 play with 83 points scored. On Friday night the Cardinal put 42 on the board against Oregon State (2-2, 0-1 Pac-12) to pull away from the Beavers in the Pac-12 North battle. All of a sudden Stanford once again looks like a real threat in the Pac-12, and looks equipped to take on Oregon later on this season, along with upcoming games against Arizona and UCLA.

Christian McCaffrey pounded the ball on the ground for Stanford with 206 rushing yards. Barry Sanders added 97 yards and scored two touchdowns, and quarterback Kevin Hogan was effective with his arm, completing nine of 14 pass attempts for 163 yards and two touchdowns. Friday night showed Stanford get back to the earlier roots of their rise as a program under Jim Harbaugh, with the running game setting the tone the way Toby Gerhart used to do before the Cardinal started riding high with Andrew Luck. That si the recipe for success at Stanford, especially since Hogan can tend to be a bit up and down at times. If Stanford is going to run the football as well as they did against Oregon State, then they will wear down opposing defenses and run the clock well in conference play. Stanford held the football for 34:35 in the win, and going 7-for-12 on third down conversions was a big reason why.

“We ran the ball very physically,” Stanford head coach David Shaw said after the game. “We’ve got a very physical offensive line that’s jelling together and we’ve got some dynamic runners who can make plays.”

Stanford gets their next two games at home in Palo Alto, and they will be pretty big matchups. Stanford will get what could or should be a ranked Arizona team coming in necxt week. The Wildcats are hosting UCLA tonight, so a loss could potentially drop No. 16 Arizona out of the top 25. Regardless of tonight’s result, Arizona should be a good challenge for the Cardinal. Stanford then gets 12 days to prepare for a Thursday night game at home against UCLA. UCLA enters tonight’s game at Arizona ranked ninth in the nation in the AP poll, and the Bruins face Arizona State next week.

This is a key stretch for Stanford if the Cardinal are to make a serious run in the Pac-12. All eyes may want to shift ahead to November 14 when Oregon visits Stanford, but the Cardinal have some huge opportunities to get through before that highly anticipated Pac-12 North matchup.

Those complaining about Heisman voters leaving Winston off ballots are misguided December 17, 2013 5:50 pm