For as much talk as there has been about Oklahoma and even West Virginia when it comes to the Big 12 championship race, it seems No. 11 Oklahoma State has been flying under the radar. That should not be the case after the Cowboys (9-2, 7-1) picked up yet another win in conference play to set themselves up for a chance to clinch the Big 12 title in two weeks. Oklahoma State’s 31-6 victory on the road against TCU (5-5, 304 Big 12) in Fort Worth also keeps Oklahoma state on the radar for a shot at the College Football Playoff.

Oklahoma State quarterback Mason Rudolph passed for 207 yards and a touchdown and picked up two rushing touchdowns, while two running backs (Chris Carson and Justice Hill) went for more than 100 yards on the ground to power the offense by TCU. The defense also frustrated TCU quarterback Kenny Hill with a pair of interceptions, and Hill was little more than a minor threat with his dual-abilities.

Yes, it’s true. The Cowboys do have a slight sliver of hope to reach the College Football Playoff. Considering both the MAC and Big 12 previously basically confirmed Oklahoma State’s loss to Central Michigan never should have happened, Oklahoma State could hope the selection committee gives them a pass for one blemish on their schedule. Oklahoma State may still need some help elsewhere to move up high enough in the next two weeks, but they should very much be in the discussion for the committee moving forward, if they knock off Oklahoma in two weeks.

That will be Oklahoma State’s next game. After a bye week next week, Oklahoma State travels to Norman to play the rival Sooners on December 3. Oklahoma State won the last time they visited Memorial Stadium, with a 38-35 thriller two seasons ago.

TCU still has two games to play, including a road game at Texas on Black Friday next week. TCU will have two games to try and meet the six-win minimum for bowl eligibility.

In the midst of SEC Media Days, the Big 12 has dropped a little information on the media masses.

That conference announced Wednesday both its preseason All-Big 12 team as well as the media’s picks for its Players of the Year.  The headliner for the latter picks is Trevone Boykin, the TCU quarterback who’s the betting Heisman favorite and was the media’s selection as Offensive Player of the Year.

The other Players of the Year honors went to Baylor defensive end Shawn Oakman (Defense) and Oklahoma State running back Chris Carson (Newcomer).

Eight of the 10 teams in the Big 12 were represented on the all-conference team, with the lone exception being bottom-feeders Kansas and Iowa State.  Baylor led all teams with seven selections (four offense, three defense), followed by five apiece for TCU (four, one) and Oklahoma (three offense, two defense).

Kansas State (two, one), Oklahoma State (zero, three), Texas Tech (one, two) and West Virginia (one, two) each three players on the team.  Texas, meanwhile, had just one.

It should be noted that, offensively, the media placed three receivers and three running backs, along with a fullback, on their team.  Defensively, five linemen are part of the squad, while a tie in the secondary voting led to six players on that unit being included. 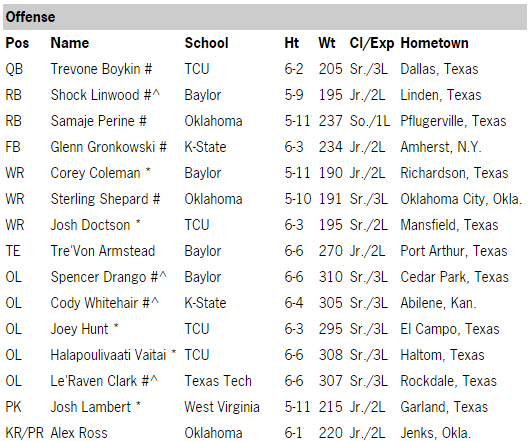 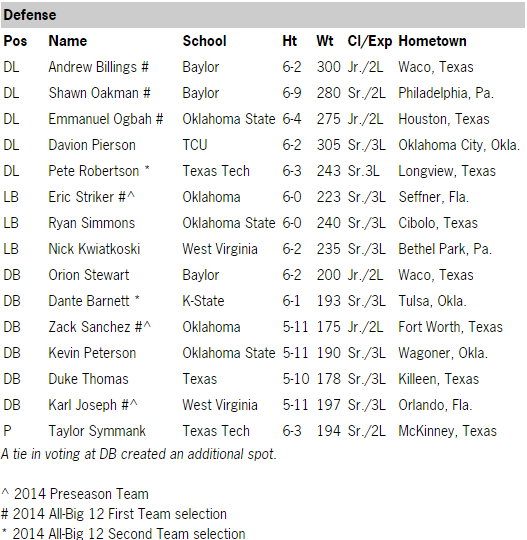