When Michigan added Iowa transfer quarterback Jake Rudock, many suspected the former Hawkeye would have a pretty good chance of walking in and taking the starting job. This is far from a given, of course, and Shane Morris is not about to just let him take it.

“I think I can win the starting job because I have the mentality to do so,” Morris said Saturday at Michigan’s quarterback camp, per MLive.com. “Right now it’s my job to lose and I’m just going to keep working hard and fight off any competitors that are trying to take it away from me.”

To reiterate his point, Morris later said with a smile “He came here to take my job and I’m just not going to let it happen.”

Earlier this year, before the Rudock transfer had been made official, Morris said Michigan could bring in 100 quarterbacks to compete for the job and he would take them all on.

Confidence from a quarterback is what you want to have, and judging by this quote alone it would appear Morris has plenty of it. Last season Morris played in five games behind starter Devin Gardner. In those five games, Morris completed 14 of 40 pass attempts for 128 yards and he was picked off three times.

Rudock played in 12 games for Iowa last fall, competing 61.7 percent of his passes for 16 touchdowns with five interceptions thrown. Going off of numbers alone, it may just be Rudock looking to keep Morris from taking his job. But this is a brand nw era under Jim Harbaugh, and the slate should be clean for every player heading into the fall.

The NFL Combine gets started today with college football’s best NFL prospects getting set to show off and work out in front of the eyes of the league’s top scouts and coaches from every NFL franchise. It’s a pretty big deal, and there is no real down time for players. Aside from workouts and getting measurements taken, players are interviewed by coaches and franchise executives as teams look for the next players to draft in the upcoming NFL Draft. Being prepared for the grueling event is critical for some players, and getting advice from those who have been through the process is always wise.

This morning, before heading to Indianapolis, Florida State’s Heisman Trophy quarterback Jameis Winston and Baylor’s record-setting quarterback Bryce Petty did just that up in Ann Arbor, Michigan. Michigan head coach Jim Harbaugh provided some insight and advice for both players Tuesday morning from inside Schembechler Hall.

Winston is expected to be one of the top players drafted in the 2015 NFL Draft. Petty may be the third quarterback drafted behind Winston and Oregon’s Marcus Mariota, but could be in need of a strong showing at the combine to improve his draft stock.

Harbaugh has some fresh NFL insight of course, as the former head coach of the San Francisco 49ers, and his previous work with players like Andrew Luck and Colin Kaepernick command respect from a pair of quarterbacks looking to take their game to the next level. Noticeably, although more likely just ironically, absent from this picture? Michigan quarterback Devin Gardner.

Early in the fourth quarter of Ohio State’s win over Michigan, J.T. Barrett went down with what turned out to be a fractured right ankle.  The injury ended Barrett’s first season as a starter, and could potentially damage the Buckeyes’ shot at a potential playoff shot.

As Barrett lay on the Ohio Stadium turf, however, that was a mere afterthought as all of the attention turned to Barrett, the person. Some what unlikely was one of the players who, in very public fashion, turned his attention to the fallen player.

That display of unsolicited sportsmanship was one of the classiest gestures you’ll ever see in a sporting arena.  Gardner was rightly applauded near and far for providing comfort to “the enemy.”

Wednesday, Gardner took to Instagram to display a letter sent to him by an OSU official, who in it lauds Gardner for his class and humanity. 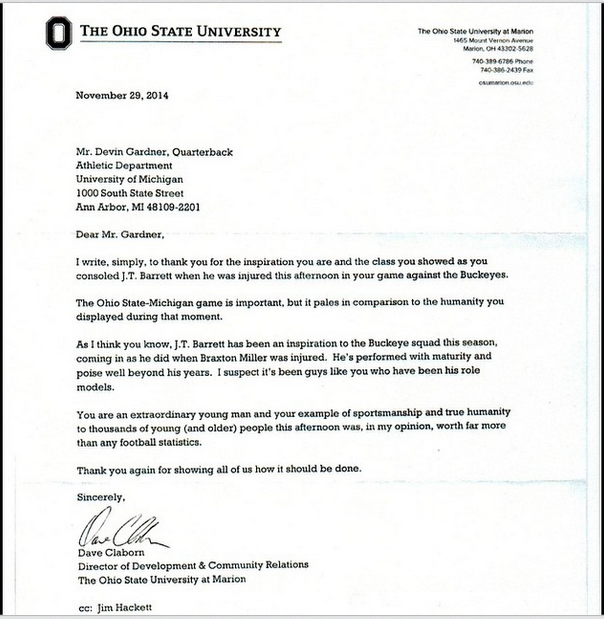 An emotional and fierce rivalry on the field, respect — and sportsmanship (most of the time) — off of it.  Yet another reason why The Game is the greatest rivalry in all of sports*.

(*Yes, I know.  The comments section is there for the whine, so please spare me your emails.  Thanks in advance.)

PROJECTING CFP TOP FOUR
As it turns out, there was some significant upheaval — and near-upheaval — around the top of the College Football Playoff rankings that will continue to reverberate for days to come.

First and foremost, obviously, was No. 4 Mississippi State suffering its second loss of the season and seemingly knocking itself out of playoff contention.  Additionally, No. 6 Ohio State suffered a loss (star quarterback J.T. Barrett to a season-ending injury) in a win that could (maybe) (possibly) do serious damage to its playoff hopes as well.

Toss in near-misses from No. 3 Florida State (five-point win over 6-5 Florida) and No. 7 Baylor (two-point win over 4-8 Texas Tech) against bad football teams, and there will be some very eager and attentive bystanders when the new rankings are released Tuesday.  Hell, No. 1 Alabama’s season was on the line as it trailed Auburn by 12 in the third quarter at home before going on a 34-3 run to put the game away.

The team that arguably gained the most this weekend?  TCU, and they were sitting at home on their couches watching the mayhem develop.

About the only certainty coming out of Week 14 is that four different conferences will grab the four available playoff spots.  Which four, and which order, won’t be determined until next Saturday’s play has ended.

Entering Week 14, the Top Four, in order, was Alabama, Oregon, Florida State and Mississippi State.  What will it look like when the rankings are released?  My best guess is…

The main wildcard in all of this — maybe not in this week’s rankings but certainly the final one — is the Buckeyes.  If OSU can beat a very good and 14th-ranked Wisconsin in the Big Ten championship game, would the committee put the Buckeyes in ahead of what would presumably be a pair of one-loss teams, Baylor and TCU, that won’t play in a championship game, knowing that the player who helped get the Buckeyes to 11-1 won’t be available?  And, as asked earlier Saturday, would the committee’s view of OSU depend on how Barrett’s replacement, Cardale Jones, performed in his first career start on one of the biggest stages?  We simply don’t know the answers to any of those types of questions, and won’t begin to get answers until, at the earliest, Tuesday evening.

Of course, the Bears still have their own stiff test to pass, hosting No. 12 Kansas State in Week 15.  And then there are the Horned Frogs, who can do nothing to improve its résumé — but could potentially damage it if they struggle — as it closes out the regular season against 2-9 Iowa State.

And then there’s this: what if one of Alabama, Oregon or Florida State — or some combination of the three — lose in their respective conference championship games next weekend?  All hell breaks loose, that’s what happens.  The best thing is, at least for non-fans of those squads, it’s entirely possible.  FSU plays a Georgia Tech team that’s won five straight, including Saturday’s win on the road against ninth-ranked Georgia, and runs the hard-to-defend option offense; Arizona, which has dropped No. 25 Utah and No. 13 Arizona State in back-to-back weeks, will prove to be a stiff test for UO, especially seeing as the Wildcats beat the Ducks by seven in Eugene earlier this year; and Missouri, despite the faulty thinking of some, will not be a pushover for UA, especially with that ferocious Mizzou defensive line.

While one of the seven teams may have been “eliminated” in Week 14, there remains plenty of potential for mayhem and carnage in Week 15.  Yep, this playoff thing sure is hurting the best regular season in sports…

A-C-C!!! A-C-C!!!
I don’t know if you noticed or not, but the ACC had a very good day today… and very much at the expense of its big football brother, the SEC.

For those unaware, allow me to count the SEC carcasses left strewn about the South after getting trucked by ACC programs:

I don’t know if that’s happened before, especially of late, but I’m quite certain it wouldn’t take long to call the roll of the times it has.  Sure, all four wins came against the weak link in the SEC chain, the East, but it was still an impressive performance by a much-maligned conference.

END_OF_DOCUMENT_TOKEN_TO_BE_REPLACED

If this is indeed the last game of the Brady Hoke era, the head coach’s players aren’t going to let him go down without a fight.

Playing an inspired brand of football that can only come in a rivalry game, unranked Michigan shook off a rough start in The Game to head into the locker room tied at 14-all with Ohio State after two quarters of play.  UM’s defense, one of the few consistent bright spots for the team this season, limited the high-powered OSU offense to just 93 yards prior to an 83-yard drive to end the half; the Buckeyes’ came into Week 14 averaging a shade over 511 yards per game.

The way The Game began, however, you never would’ve thought UM would’ve even been within shouting distance of its hosts.

On the second play from scrimmage, Devin Gardner tossed a horrendous interception that the Buckeyes turned into a touchdown.  On their next series, Gardner was sacked twice in the span of three plays and the Wolverines were forced to punt.  From then on the OSU defense could do little to stop UM’s offense as they rolled up 203 yards on their last three possessions of the half.

After that interception, Gardner completed 11-of-14 passes for 129 yards and a touchdown.  Gardner’s counterpart, Heisman contender J.T. Barrett, struggled with accuracy throughout the half as he completed half of his 14 passes for just 65 yards, although he did score on a 25-yard touchdown run with :07 left in the second quarter to knot the score at 14-all.

Barrett’s touchdown pass in the the first quarter to put OSU up 7-0 was the 43rd touchdown he’s been responsible for this season, breaking the Big Ten record of 42 held by Purdue’s Drew Brees.

To go along with being in a dogfight, OSU is giving additional ammunition to their detractors who argue they don’t belong in the College Football Playoff discussion.  Of course, struggling against a bad team, even if it’s an archrival, is something that no team in the playoff hunt can afford regardless of the conference, but especially one from the much-maligned Big Ten.

The Buckeyes, though, have 30 minutes remaining to flip the script and improve their appearance in front of the CFP committee.  Whether their hated rivals play along is another matter entirely.

Before heading to NFL Combine, Winston and Petty get advice from Harbaugh February 17, 2015 10:32 am

Buckeyes repay Devin Gardner’s classy gesture with one of their own December 3, 2014 2:28 pm