A year after having the BCS formula go against them, the 2001 Miami Hurricanes were on a mission to leave no doubt who the best team in college football was early in the 21st century. Arguably one of the most dominant teams in college football history, Miami set the tone for a season of dominance right from the start of the season and was barely given a fight all season long en route to the BCS national championship. It would be the last national title for the Miami program before some significant changes took place for the program and the sport as a whole.

Butch Davis had capitalized on Miami’s 11-1 season the year before by accepting a job offer from the NFL’s Cleveland Browns. Staying behind to guide the ship in Miami was Larry Coker, who had been promoted from offensive coordinator to head coach. Defensive coordinator Greg Schiano also left the Hurricanes to take over as head coach at Rutgers. Randy Shannon took over as defensive coordinator for the Hurricanes, with Rob Chudzinski taking on the role of offensive coordinator. It didn’t matter how many changes were made on the staff, because the roster was loaded with NFL-quality talent with players like Ed Reed, Clinton Portis, Jeremy Shockey, and Jonathan Vilma. The talent Miami had on the roster was unmatched, and the motivation after feeling burned by the BCS computers the year before was a recipe for mayhem.

Miami opened the season with a dominating victory at Penn State to hand the Nittany Lions their worst home loss under Joe Paterno, and Miami kept on rolling against Big East opponents Rutgers and Pittsburgh before handling Troy State at home. Miami then scored a lopsided victory in Tallahassee against No. 13 Florida State. Although Miami topped top-ranked FSU the previous season, it was Florida State that went on to play for the national title (and lose to Oklahoma). Miami kept their foot on the ga son offense and defense the rest of the year with blowout victories over Big East foes like West Virginia, Boston College and No. 15 Syracuse. A late November romp of No. 11 Washington put Miami one victory away from delivering on the mission of an undefeated season. They got it done with a regular season finale at No. 14 Virginia Tech, with the Hokies giving Miami its closest game all season long, a 26-24 victory for the Canes.

The Rose Bowl was the scene for the BCS National Championship Game, where Miami was opposed by Nebraska and Heisman Trophy winner Eric Crouch. But the Huskers were not up to the challenge, which had been feared after the BCS computers managed to find room for Nebraska in the championship game despite losing their final game of the regular season to Colorado by a score of 62-36 (Colorado went on to play for and won the Big 12 championship game. Colorado also faced the No. 2 team in the AP and coaches poll, Oregon). The reality is it may not have mattered if Miami played Nebraska, Colorado, AND Oregon all at once because this Canes team probably would have won anyway.

But this was Miami’s last national championship victory, and the quest for another national title in Miami continues with the dawn of a new era under Manny Diaz. Let’s look back to see what else was going on in 2001.

The current president, Donald J. Trump, was officially a Democrat after switching from the Reform party in 2001. The construction of Trump World Tower was completed that same year.

America was in love with “Friends,” which was taking the top spot of the TV ratings in its eighth season on NBC. This was the season when Rachel had a baby and is regarded by some as the best season in the series. The year of television was also highlighted by Regis Philbin getting a new co-host on “Live!”, which ended up being Kelly Ripa, who still hosts the morning talk show to this day.

The world becomes familiar with C.T.U. agent Jack Bauer, played by Kieffer Sutherland, in the debut season of “24.” And for the first time ever, HBO took viewers behind the scenes of an NFL training camp with the debut of “Hard Knocks.” The Baltimore Ravens, fresh off their Super Bowl victory from the season before, were the featured team with a quarterback battle between Randall Cunningham and Elvis Grbac among the storylines worth following.

The first Harry Potter movie made its debut on the big screen in 2001 with Harry Potter and the Philosopher’s Stone leading the way at the box office. The first film adaptation of the Harry Potter series of books blocked another film adaptation of a fantasy novel series from the top spot by keeping The Lord of the Rings: The Fellowship of the Ring at No. 2. Animated monsters of different varieties were also raking in ticket sales with the release of Monsters, Inc., and Shrek.

Another long-standing film franchise made its debut as well with Vin Diesel and Paul Walker starring in The Fast and the Furious. The meaning of family was never the same again, and little did anyone know what a smash success the franchise would become.

The award-winning A Beautiful Mind included an award-winning performance from Russell Crowe and led to awards for director Ron Howard. 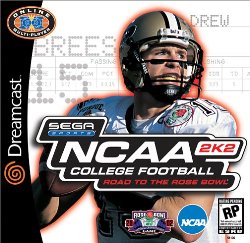 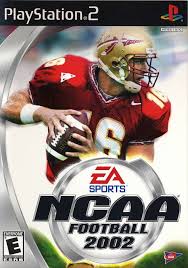 It is also worth mentioning there was actually another NCAA football video game option in 2001. SEGA’s NCAA College Football 2k2: Road to the Rose Bowl was exclusive to the SEGA Dreamcast. It featured former Purdue quarterback Drew Brees on the cover.

On September 11, 2001, terrorists attacked the United States by hijacking airline jets and crashing them into the World Trade Center in New York City and the Pentagon in Washington D.C. A fourth jet was brought down in Pennsylvania. The entire sports world hit pause that week as both Major League Baseball and the NFL closed their leagues for a week in the aftermath of the biggest terrorist attack on American soil.

College football schedules were also put on hold for the most part as games were wiped off the Week 2 schedule and rescheduled for later in the season as much as possible.

A backup quarterback takes over the job for an injured Drew Bledsoe with the New England Patriots and leads the team to its first Super Bowl championship. That man is former Michigan seventh-round draft pick Tom Brady. Brady wins his first game as a starting quarterback that season after an 0-2 start to the year by topping Peyton Manning and the Colts. They would go on to have a storied rivalry in the years to come.

The Arizona Diamondbacks win their first World Series by defeating the New York Yankees in an epic seven-game series. Ichiro Suzuki made his MLB debut after coming over from Japan. He wins both the AL Rookie of the Year and the AL MVP.

Allen Iverson stepped over Tyron Lue in an overtime series-opening win against the Los Angeles Lakers in the NBA Finals, but Kobe Bryant and Shaquille O’Neal win their second straight NBA title with a 4-1 series victory over the Philadelphia 76ers.

While there may be some at NBC who wish I didn’t remind them about this, the XFL was a thing that existed.

Tiger Woods became the first golfer to hold four major championship titles at the same time after adding the Masters to his collection.

The Associated Press named Barry Bonds Male Athlete of the Year. Wonder if they’d like a do-over on that one.

Current Miami head coach Manny Diaz was a graduate assistant at NC State. Nick Saban was in his second season at LSU, and Dabo Swinney was sitting out the 2001 season while receiving contractual payments from his previous employer, Alabama, after the school fired the entire coaching staff under former Tide head coach Mike DuBose.

Miami Heat legend (and recently retired) Dwayne Wade had yet to be drafted by the Heat. That would happen two years later.

When will The U actually be back?

After winning it all in 2001, Miami played two more seasons in the Big East. The conference was about to lose its biggest names as confe3rence realignment started to tremble. Miami and Virginia Tech left for the ACC after the 2003 season. Boston College followed a year later. Years later the ACC would welcome Louisville, Pittsburgh, and Syracuse and the Big East lost West Virginia (Big 12) and Rutgers (Big Ten). But Miami was thought to bring some football balance to the conference after years of domination by Florida State. Little did anyone know that it would not be until the 2017 season when Miami would finally get a chance to play in the ACC Championship Game.

When the Miami Hurricanes host Georgia Tech for a critical ACC Coastal Division showdown in October, the program will pay tribute to a handful of great players from the program’s history. Michael Irvin, Ray Lewis, Ed Reed, Warren Sapp, and the late Sean Taylor will all be added to the school’s Ring of Honor in Hard Rock Stadium.

That is quite a collection of program legends to honor on the same night, but it is also a group very much deserving of the honor from the program. With Miami hosting the Yellow Jackets for a primetime Thursday night game, expect Miami to be able to showcase the history of the program on as grand a stage as possible. The game is scheduled for an 8 pm kickoff on ESPN.

Irvin holds the Miami record for most career touchdown receptions (26) and he was a part of Miami’s national championship team in 1988. The brash wide receiver went on to have a Pro Football Hall of fame career with the Dallas Cowboys, where he was coached for a time by former Miami head coach Jimmy Johnson and won three Super Bowls.

Lewis was an all-Big East player for the Hurricanes in 1994 and 1995 and went on to have a Pro Football Hall of Fame-worthy career as the cornerstone of the Baltimore Ravens from 1996 through 2012 with a pair of Super Bowl victories and one Super Bowl MVP award. Reed was a teammate of Lewis from 2002 through 2012 with the Ravens, where he also put together a hall of fame-caliber career. Reed was a two-time consensus All-American in 2000 and 2001 and a BCS national champion with the Hurricanes in 2001. Like Lewis, it will just be a matter of time before heading to Canton for the Pro Football Hall of Fame.

Sapp is already in Canton, and he had quite the career at Miami before heading to the NFL. Sapp became the first Miami player to win the Lombardi Trophy and was the unanimous Big East Defensive Player of the Year in 1994, when Miami played Nebraska in the Orange Bowl with an outside shot at claiming a national championship (Nebraska and Penn State each went undefeated and finished 1-2 that season; Miami was No. 3 going into the Orange Bowl against the Huskers).

Taylor looked like he would be another hall of fame player before his untimely death in 2007. At Miami, Taylor led the nation in interceptions in 2003 and set the Miami record for pick-sixes with three in the 2003 season. He was named the Big East Defensive Player of the Year as a result and remains the program’s fifth-all-time interceptions leader. He was a part of Miami’s 2001 national championship team.

Miami will also be wearing their brand new alternate black uniform for the game.