Former Michigan running back Justice Hayes is heading south. Hayes took to Twitter Tuesday to confirm his decision to transfer to Southern Mississippi for this upcoming season. As a graduate transfer, Hayes will be eligible to play right away for the Conference USA program in need of all the help it can get.

Hayes was fifth on the Michigan roster in rushing last season with 213 yards on 48 rushing attempts. The Michigan backfield is a crowded bunch heading into the 2015 season, but Hayes may have a chance to have a bit more of an impact at Southern Miss. The Eagles return their top two rushers from 2014 with Ito Smith (536 rushing yards, 2 touchdowns) and George Paynes (271 yards, 6 touchdowns), but Hayes and his veteran presence could be a benefit on and off the field.

Southern Miss won just three games last year, but that was an increase from the one win it recorded the previous season. Southern Miss has fallen hard since Larry Fedora coached the program to a 12-2 record in 2011, but Todd Monken is still putting the pieces together and building something that can compete for a Conference USA title once again.

My little bro pulled the trigger today so what the heck, let’s get the ball rolling!!! #GoldenEagle #ToTheTop pic.twitter.com/ubmssNgXXm

The work week began with word that a Michigan player has decided to leave Ann Arbor.  As it turns out, it’ll end the same way.  Times two.

First off, on Instagram Friday, Russell Bellomy announced that he will transfer out of the UM football program. In a very heartfelt statement, the quarterback asked that “you respect my decision and support me in whatever I do.”

Below is the statement, in its entirety.

“To those of you that know me well, I always try my hardest never to get emotional; however, I write this with a heavy heart. My heart is packed full of experiences, acquaintances and irreplaceable memories that I will reminisce on for the rest of my life. I love each and every one of my teammates, both former and present, and I hope y’all know that every day I busted my butt for you and the benefit of UM.

“I will receive my degree at the end of this semester and have decided to sign my release that enables me to play my 5th year as a graduate student at another university. I pray that you respect my decision and support me in whatever I do, because this was not an easy process. I am forever grateful to have attended and played for UM and I wouldn’t trade it for anything in the world. “For I know the plans I have for you…” #GoBlueAlways”

As noted in the statement, Bellomy will be a graduate transfer, which means he would be eligible to play in 2015 if he decides to move on to an FBS program. The release granted by Michigan, which Bellomy showed on his social media post, allows him to transfer to any school not on the Wolverines’ schedule. 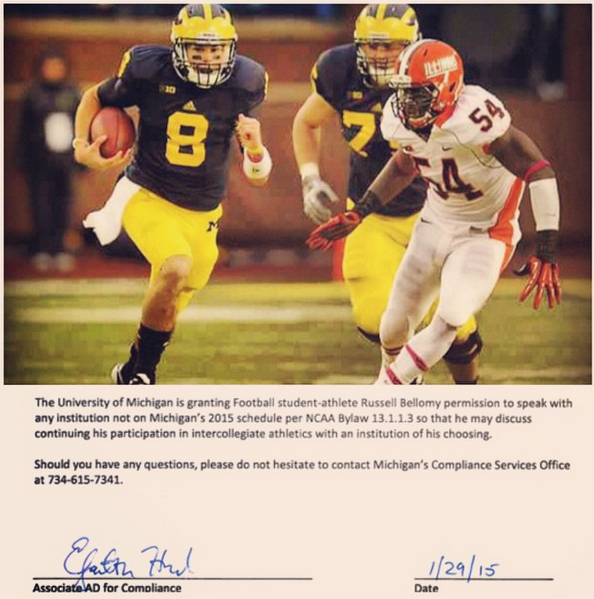 Bellomy, a three-star member of the Wolverines’ 2011 recruiting class, played in six games during his time at UM, completing 4-of-23 passes for 46 yards and four interceptions.  Three of those interceptions came in a 23-9 loss to Nebraska in October of 2012, a game in which he was forced into action because of an elbow injury to starter Denard Robinson.

A short time later, teammate and defensive end-turned-tight end Keith Heitzman did the same thing as Bellomy, and on the same website to boot.

“The past few years have been an unforgettable journey full of ever lasting memories, both exciting and saddening. I have experienced the spoils of winning and the heartbreak of losing. I have always blamed my struggles on external factors and never realized that all of this was part of the process of becoming a Michigan man. It has been the most challenging yet rewarding 4 years of my life and for that I will be forever grateful.

“However, this moment right now has manifested itself into the toughest experience as of yet. I have signed my release form allowing me to talk with other schools for the potential to transfer. As of right now I will leave this great institution in the spring with a degree in hand and friendships that will last a lifetime. I have to make the best possible decision for me, therefore, I feel like I need to explore my options. I have to thank all the fans for their continued support through the turbulent times over these past few years and promise that Michigan is destined for greatness in the future. #forevergoblue”

Last season, Heitzman caught two passes for 32 yards and a touchdown in playing in all 12 games.  Heitzman was a three-star member of UM’s 2011 recruiting class, and will be eligible to play immediately at an FBS school because he will be a grad transfer.

Monday, it was reported that running back Justice Hayes would be leaving as a graduate transfer. Prior to that, and between the firing of Brady Hoke and the hiring of Jim Harbaugh, linebacker Michael Ferns and offensive lineman Kyle Bosch left the program as well. Both of those players ultimately landed at West Virginia.

Looking for an opportunity for more playing time in his fifth and final year of eligibility, running back Justice Hayes has decided to transfer out of the Michigan program. Hayes announced on his Instagram page —  because this is what college kids do these days — he is leaving Michigan on good terms and will be graduating from the university this spring.The fact that I will be graduating from the University of Michigan in April will be meritorious. I have earned team captain on numerous occasions, won respect

“The fact that I will be graduating from the University of Michigan in April will be meritorious,” Hayes said. “I have earned team captain on numerous occasions, won respect from coaches and players, and most importantly played my heart out every Saturday. I truly appreciate the offer from [Michigan head coach Jim Harbaugh] to allow me to return for my 5th year, but I have decided that I will choose another college to play football as a graduate student.”

Hayes appeared in all 12 games Michigan played in 2014. He carried the football 48 times for a total of 213 yards in a crowded backfield. That depth at the running back position likely meant little playing time would be expected for Hayes in 2015. Because he will be graduating from Michigan, he will be eligible to play at any FBS program that welcomes him to their program this fall.

Hayes also had a note for any potential critics of his decision. There will likely be somebody out there that reads a little too much into it, but the point is a solid one. Players need to have the freedom to make the best possible decision for their own path, and not be hounded by fans who say otherwise.

“There will be people out there that disagree with this tough decision I made, but they won’t be the ones that cut me checks in the future.”

Michigan head coach Brady Hoke announced Monday running back Derrick Green has suffered a broken clavicle. The injury will keep him out of action for the remainder of the 2014 season and explains why he was left off the depth chart for this weekend’s game against Penn State.

Without Green, a player who had been showing promise this season, Michigan will need to find ways to run the football that do not necessarily revolve around quarterback Devin Gardner. Gardner has returned to the starting job under center after the injury to Shane Morris, and Hoke is ready to continue having Gardner lead the offense as long as he is healthy. If the Wolverines are going to turn things around this season and make a run to a postseason bowl game, the running game needs to improve.

Michigan will start this week ranked seventh in the Big Ten in rushing offense with an average of 180.83 yards per game and an average of 5.05 yards per rushing attempt. Green ends his season having led the Wolverines with 471 yards and three touchdowns. He was taking nearly double the number of rushing attempts per game than Michigan’s second-leading rusher, De’Veon Smith. The Wolverines will move forward with Smith trying to carry the bulk of the running game, but there will be times when Gardner runs the football as well. This should frustrate Michigan fans, because Gardner running the football has not exactly panned out for Michigan in terms of wins. Sure, Gardner may rack up some big numbers, but in the end this looks as though the Wolverines continue to try pushing a square peg through a round hole.

Justice Hayes and Drake Johnson are listed as Michigan’s back-up running backs behind Smith this week. The two have combined for 129 yards 22 combined rushing attempts so far this season. The depth at running back has become an issue that may not have been expected at the start of the season.

Michigan head coach Brady Hoke said earlier this spring the quarterback competition was wide open. If Saturday was any indication, Hoke may keep selling that idea whether you want to believe it or not.

Not quite back to 100 percent, Michigan quarterback Devin Gardner did little to put the clamps down on the quarterback competition during the Wolverines’ spring game on Saturday. Gardner struggled in the passing game, completing just two of 10 pass attempts for 53 yards (44 of those yards came on one play). His top threat to the starting job under center, Shane Morris, was more consistent in completing five of 11 attempts for 73 yards.

Freshman wide receiver Freddy Canteen, an early enrollee, had a big day in his Michigan debut. Canteen led all players with 44 receiving yards, but that came on his only reception of the game. It just so happened to be the longest pass of the day, from Gardner.

Michigan’s running game got some work on Saturday as well. Four different running backs recorded at least six carries in the game. Justice Hayes had the longest run of the day on a 12-yard scamper late in the scrimmage.

Overall, the spring scrimmage did little to show Michigan has taken great strides from a season that ended up with seven wins. The Wolverines still have plenty of work to do before being able to challenge the likes of Ohio State and Michigan State in the Big Ten, but the spring scrimmage should not be viewed as the ultimate predictor for what will happen in the fall. The Wolverines are still putting some things together on both sides of the football and will return some key players before the start of the football season.