Shortly after adding a controversial transfer, Marshall has decided to distance itself, permanently, from a former transfer who became one of its most talented players on the offensive side of the ball.

In a press release, the Herd announced that “head coach Doc Holliday… has determined it best that the program and redshirt sophomore wide receiver Angelo Jean-Louis part ways.” The release further stated that “[t]he program wishes him the best in his future endeavors.”

The parting of ways is the latest speed bump in Jean-Louis’ checkered college football career.

A Rivals.com four-star recruit, Jean-Louis was one of the highest-rated members of the Miami’s 2012 class. Jean-Louis was the No. 8 athlete in the country according to that recruiting service, and was rated as the No. 22 player at any position in the state of Florida.

He was an academic non-qualifier and never played a down for the Hurricanes, instead enrolling at Fork Union Military Academy in Virginia before signing with Marshall in December of 2012. In April of 2013, Jean-Louis was charged with two felony counts of fraudulent use of an access device.  Specifically, it was alleged that Jean-Louis used a stolen credit card twice — one purchase for $14 and one for $11, both occurring at a local 7-Eleven.

Jean-Louis bounced back from that ignominious start to his career in Huntington to, after sitting out the 2013 season to satisfy NCAA transfer rules, start eight of 14 games in 2014. He was tied for the second on the team in receiving touchdowns (six); second in yards per reception (23.3); third in receiving yards (490); and fifth in receptions (21). Following that performance, he was named to the Conference USA All-Freshman squad.

With Tommy Shuler and Eric Frohnapfel having departed, Jean-Louis was, along with Davonte Allen, the most talented and productive returning receiver for a Herd offense that also must replace All-Everything quarterback Rakeem Cato.

Award watch list season is drawing to a close, but not before the Walter Camp Foundation released its list of 50 players worthy of consideration for its player of the year honors.

TCU quarterback Trevone Boykin was a second-team Walter Camp All-American last season, and he is among the popular candidates for the Walter Camp Award this season. Other previous Walter Camp All-Americans joining Boykin on this watch list are Arizona linebacker Scooby Wright III and Colorado State wide receiver Rashard Higgins. Of course, there is a handful of players from Ohio State, as has been the case on multiple watch lists thus far. Ohio State quarterbacks Braxton Miller, J.T. Barrett and Cardale Jones each made the watch list. So did running back Ezekiel Elliott and defensive end Joey Bosa.

The list of candidates will be trimmed down to 10 semi-finalists in mid-November and the award will be presented on December 10 at the annual college football awards show. Last year’s winner was Oregon quarterback Marcus Mariota. A quarterback has won the award all but five times since 2000. USC has been the home to a nation-leading six Walter camp Award winners, including running backs Reggie Bush, Marcus Allen and O.J. Simpson (twice). USC quarterback Cody Kessler and linebacker Su’a Cravens each appears on this year’s watch list.

Ohio State’s Ezekiel Elliott was the hottest running back exiting the 2014 season, and that momentum carried into the offseason as he’s one of the wagering favorites for the 2015 Heisman Trophy and claimed a prestigious amateur honor for good measure.  Not surprisingly, he’s landed on a watch lost that specifically honors the position he plays.

As part of the annual watch list dump in mid-July, the Doak Walker Award announced a group of 69 backs added to its preseason listing.  Included in that number are six backs who finished in the Top 10 in rushing yards in 2014: Elliott (No. 3), along with San Diego State’s Donnell Pumphrey (No. 4), Marshall’s Devon Johnson (No. 6), Pittsburgh’s James Connor (No. 7), Oklahoma Samaje Perine (No. 8) and Toledo’s Kareem Hunt (No. 10).

Connor and Johnson were semifinalists last year for the award won by Wisconsin’s Melvin Gordon, as was 2015 watch lister Matt Breida of Georgia Southern.

Conference-wise, the Pac-12 led all leagues with 12 players on the list.  The other Power Five conferences has the SEC with 10, the Big Ten with eight, and the ACC and Big 12 with five each.  Amongst the Group of Five, Conference USA and the Sun Belt are tops with six apiece.

Arkansas, Oregon and USC were the only schools with two backs each listed. 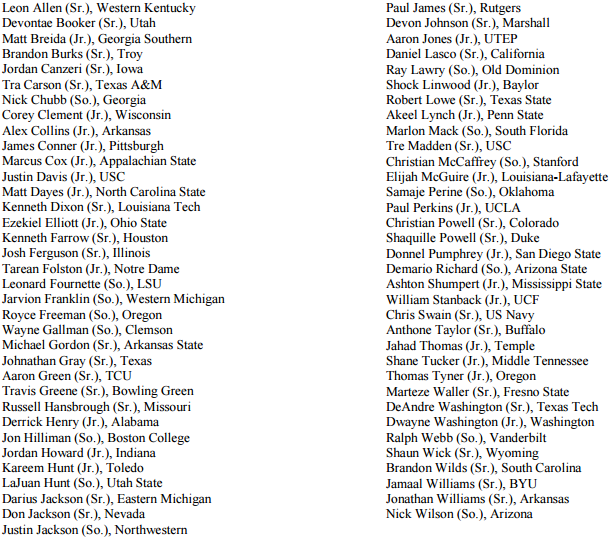 Not so unexpectedly, a former member of the Marshall football program is facing some very serious legal issues.

Earlier this month, reports surfaced that Marshall running back Steward Butler had been arrested and charged with battery in connection to the April beating of a same-sex couple.  Butler allegedly became angry after witnessing the couple, two males, kissing.  At the time, it was reported that the Huntington Police Department turned over evidence to the FBI for its review of any civil rights violations.

In addition to the felony civil rights indictments, Butler was also indicted on two misdemeanor charges of battery.

A few hours after the reports of the assault first surfaced, Butler, who was the Herd’s second-leading rusher each of the last three seasons, was initially indefinitely suspended by and ultimately dismissed from the football program

Late this past week, Cole Garvin confirmed to multiple media outlets that he has decided to transfer from the Herd and continue his playing career at an undetermined location.  No specific reason was given for his decision, although positioning in the quarterback pecking order would be a good place to start if you were looking for one.

If Garvin were to transfer to an FBS program he’d be forced to sit out the 2015 season to satisfy NCAA bylaws, although the Huntington Herald-Dispatch wrote that “[t]he likelihood is that Garvin will move down to the FCS level where he would be immediately eligible to play.”  If dropping down a rung on the college football ladder is his ultimate next step, he’d have four years of eligibility remaining. If he stays at the FBS level, he’d have three years of eligibility remaining after sitting out 2015.

It appears, though, that he’s intent on being eligible to play in 2015 as his list of prospective schools includes FCS programs Mercer, Samford, Furman, Chattanooga and UT-Martin, the Herald-Dispatch reports.

He took a redshirt as a true freshman last season.

With Garvin’s departure, that leaves the Herd with Birdsong, junior Gunnar Holcombe and freshmen Chase Litton currently on the depth chart.