As had been speculated as a possibility last week, Ohio State defensive end Nick Bosa will not play this weekend when the Buckeyes travel to Penn State for a key Big Ten East Division matchup.

“It’s going to be a few more weeks, but we expect him back,” Ohio State head coach Urban Meyer said while meeting with the media on Monday.

Bosa left Ohio State’s win against TCU two weeks ago with an injury. What was declared an abdominal and groin injury would leave Bosa out of action this past weekend against Tulane. Meyer confirmed Bosa underwent surgery and there has not been a released timeline of when Bosa is expected to be able to return to the team, or whether he will or not. Although, Meyer’s comments suggest there is optimism Bosa will be able to return down the line for the Buckeyes.

Penn State may stand to benefit by the absence of one of the nation’s top players, not just top defensive players, but the Nittany Lions will still have their paws full with Ohio State’s defensive front. Holding off the defensive line from Ohio State will be instrumental in Penn State’s chances to defend the home field and get the running game on track early and give Trace McSorley time to make some plays. Not having Bosa chase McSorley down is a plus for Penn State, but Ohio State’s depth will still give Ohio State an upper hand in terms of overall talent on the field Saturday night.

Chase Young started for Ohio State this past weekend against Tulane in place of the injured Bosa. He and Tyreke Smith figure to continue trying to plug the end in the meantime, while Dre’Mont Jones will continue to anchor the other end.

While making his first media appearance since his controversial appearance at Big Ten media day, Urban Meyer was faced with plenty of questions about his handling of the Zach Smith situation that resulted to his three-game suspension to start the season. But there was one football question mixed in at some point after nearly half an hour, focusing on the status of defensive star Nick Bosa.

Bosa will be out for this week’s home game against Tulane, Meyer said. After leaving Saturday night’s game against TCU with an injury, Meyer announced Bosa is receiving tests on an abdominal and groin injury.

Bosa has been one of the top defensive players in all of college football and was responsible for Ohio State’s first touchdown of the game against TCU by forcing a fumble that was recovered in the end zone.

How long Bosa remains out remains to be seen, but it is safe to assume Ohio State will manage just fine this week against Tulane in Ohio Stadium. Ohio State will hope Bosa can make a quick return though, because a road trip to Penn State is coming up the following week and Bosa could have an impact on that game.

For the first time in the brief history of the College Football Playoff, the Big Ten found itself without a playoff representative last season. But in 2018, the conference appears to be stocked with teams worthy of being on the playoff radar as the season begins and there are a handful of programs in the early stages of turning things around and growing with fresh new leadership over the past couple of seasons. Whoever comes out on top of the Big Ten will certainly have earned it given the road any school will have to travel to Indianapolis for the Big Ten championship game, but will it end up being enough to justify waving the Big Ten flag in the College Football Playoff?

Ohio State has made the most trips to the playoff among Big Ten programs, including winning the inaugural College Football Playoff national championship, but the season begins with a dark cloud flying above Ohio Stadium with head coach Urban Meyer serving a three-game suspension. Fortunately, Ohio State should be in good position to weather the storm thanks to young offensive stars like J.K. Dobbins running the ball and Dwayne Haskins anointed as the starting quarterback. But it will be the defense, led by Nick Bosa and Dre’Mont Jones on the defensive line, that carries Ohio State early on, including a road trip to Arlington to play TCU. Ohio State’s playoff bubble could hinge on the September schedule with the TCU game and a road trip to Penn State at the end of September.

Penn State was maddeningly close to making the playoff last year, but losing two games by a combined four points in back-to-back weeks leaves the football program hungry for more. And with Ohio State and Michigan State each coming to Happy Valley early in Big Ten play, James Franklin‘s Nittany Lions have a chance to make some noise early on despite a significant amount of turnover on defense and key losses on the offense. Despite the changes, having the Big Ten’s top quarterback in Trace McSorley should allow for some smooth transition while the rest of the pieces come together. Miles Sanders will not be Saquon Barkley, but he may not have to be running the football. Penn State’s best offensive line depth in years should be noticeable and a home schedule that also brings Wisconsin to Beaver Stadium puts Penn State in position to make a playoff case of their own.

Elsewhere in a stacked East Division is, of course, Jim Harbaugh at Michigan. Harbaugh may have the Big Ten’s top defense with players like Rashan Gary and Chase Winovich on the ends of the line and Lavert Hill playing corner. and the hope is transfer quarterback Shea Patterson will be a dramatic improvement for the entire offense. An early trip to Notre Dame should be a good litmus test for what the Wolverines will do this season. Meanwhile, Michigan State will continue to chug along and be a factor in the East race with 19 starters back from last year’s team.

Wisconsin has become the easy pick in the West Division, and they are a popular pick once again this season as the most reliable program in the West. But they are not without some potential hurdles as well. A challenging road schedule (Iowa, Michigan, Northwestern, Penn State… Purdue?) and just three returning starters on defense to go with questionable quarterback consistency from Alex Hornibrook is a lot to counter-balance the expected strong running game led by a monster offensive line paving the way for sophomore running back Jonathan Taylor, a popular preseason Heisman Trophy favorite. The West is littered with programs in rebuilding modes like Minnesota, Purdue and now Nebraska with Scott Frost, but Northwestern is always ready to pull an upset or two and this could just be one of those years where Iowa makes a run. 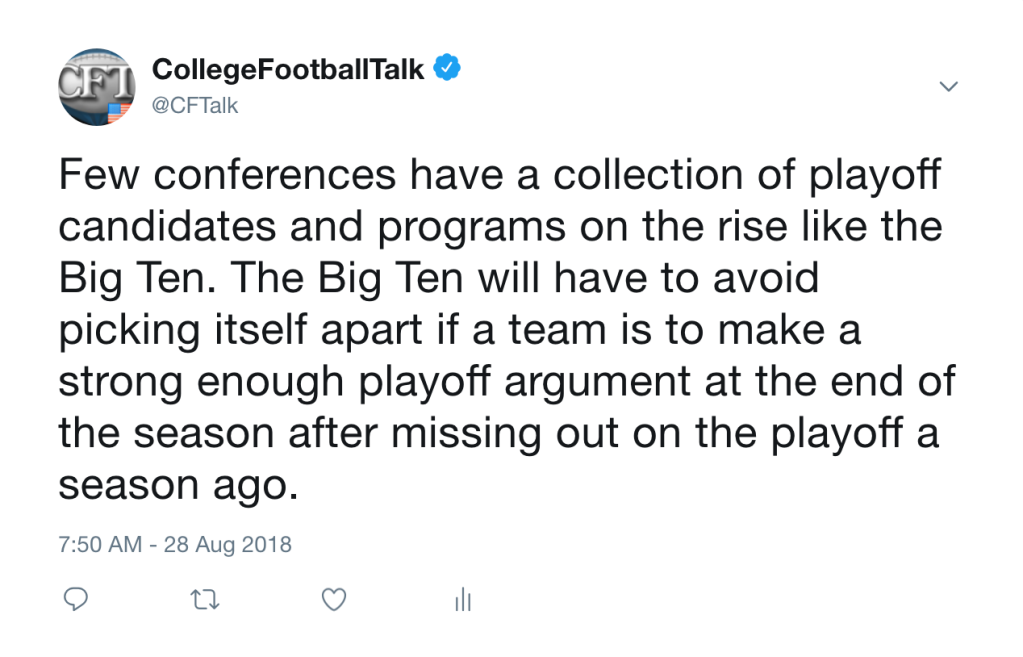 As the Big Ten gets set to begin their media day fun in Chicago, the conference assembled a panel of media members to come up with a list of 10 players to receive preseason recognition. Five players from each division were named to this year’s mini-watch list of Big Ten players, with Penn State quarterback Trace McSorley the lone player designated as a unanimous selection.

Ohio State is represented on the list by two players in the East Division with sophomore running back J.K. Dobbins and junior defensive end Nick Bosa each being recognized by the panel. Bosa was last year’s defensive lineman of the year in the Big Ten despite not being a full-time starter. Michigan defensive lineman Rashan Gary and Michigan State quarterback Brian Lewerke were also honored in addition to McSorley of Penn State.

Some names that stand out as possible omissions include Michigan quarterback Shea Patterson and Northwestern quarterback Clayton Thorson, but it may be difficult to argue against the names appearing on this preseason list.

Did your favorite NFL team pass on a defensive lineman this year? Don’t worry. Next year could be much different.

With the 2018 NFL draft in the books, the scouting eyes have already begun turning to the prospects filling out the 2019 big board. This time next year could be a big year for defensive linemen, meaning that will be a key position to watch this college football season.

Odds are all of those players will not be chosen in the top 10 as it depends on the positions of need for the teams landing a top 10 pick, but the point is the defensive line could be a strong position for NFL franchises scouting players over the next year. There is plenty of talent to be acquired.

The most defensive linemen taken in any NFL draft since 2000 is 11 in 2011 and 2003. Could 2019 continue this eight-year cycle of defensive linemen filling the first round of the NFL draft? Given the talent likely to be available next year, it could easily be on pace to do just that.