Not surprisingly, the “career” of De’Andre Johnson at Florida State was a short one.

Shortly after security footage of a disturbing incident surfaced, FSU announced that Johnson has been dismissed from the football program. Earlier this month, Johnson was charged with misdemeanor battery after video from a Tallahassee drinking establishment showed him punching a female during the course of a verbal/physical incident that turned extremely physical.

Here’s the Orlando Sentinel‘s account of what led to Johnson’s charges and, ultimately, his dismissal:

According to the [Tallahassee Police Department] report, Johnson allegedly pushed a woman from behind “aggressively” when she approached the bar. The woman turned around to address Johnson and “raised her right arm to defend herself” when Johnson allegedly “grabbed her arm that was raised and began pushing her.”

The woman raised her knee to Johnson’s midsection to push him away and attempted to punch Johnson. One witness heard the woman yell “no” twice before Johnson allegedly punched her in the face, causing bruising under her left eye, swelling to her left cheek and upper lip, and a small cut on her nose.

The woman’s account is consistent with video obtained from security cameras, according to the police department. 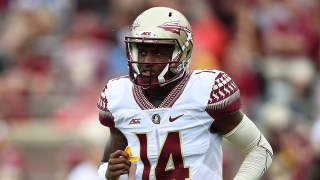 For what it’s worth, Johnson’s attorney, Jose Baez, released a self-serving statement on his client’s behalf.

“While it is clear from the video that De’Andre Johnson was not the initial aggressor, his family wants to take the lead in helping him learn and grow from this experience. He is currently participating in community service, and faith-based programs focused on battered women, substance abuse, and the empowerment of children. De’Andre is extremely embarrassed by this situation and would like to express his heartfelt apologies to everyone, including those who were directly affected, Coach Fisher and his team mates, the entire Florida State University community, as well as his family and friends.”

For those who haven’t seen the video of the incident, it appears below. You decide how much longer it’s going to be OK for a man to punch a woman… I’m sorry, decide whether this woman deserved to be punched by a “man.”

Johnson was a four-star member of FSU’s 2015 recruiting class who will likely get a shot somewhere else at some level of college football because of his physical talent.

The lone hole on Mike Locksley‘s Maryland Terrapins football staff has been filled.

Helow spent the past four seasons at Colorado State.  The first two were as a defensive quality control coach and graduate assistant.  The last two were spent as safeties coach.

The 2018-19 seasons were Helow’s first as an on-field assistant at the collegiate level.

In addition to the Mountain West Conference school, he has also been a football staffer at:

Helow played his college football at Ole Miss from 2006-10.  Most of his action during his 38 games played came on special teams.

The Hawaii Rainbow Warriors football program has afforded a wayward coach a means to return to the sidelines.

In the days after Nick Rolovich left to replace Mike Leach at Washington State, Robert Anae‘s name had been mentioned prominently as a potential successor.  Tuesday, however, the Virginia offensive coordinator announced in a statement that he has withdrawn his name from consideration for the job as the Hawaii Rainbow Warriors football head coach.

Just prior to that, it was reported by The Athletic‘s Bruce Feldman that Todd Graham is getting consideration for the job.  Very late Tuesday night, Hawaii confirmed that Graham has been hired as the school’s 24th head coach.

Graham will be introduced at a Wednesday afternoon press conference.

The 55-year-old Graham has been a head coach at four different FBS schools:

Graham has posted a 95-61 record at those stops.  His teams have played in 10 bowl games in 12 seasons, winning five of those postseason appearances.  He’s also won three divisional titles.

After being fired by Arizona State in November of 2017, Graham has been out of coaching.  He was mentioned as a candidate for the Kansas job that ultimately went to Les Miles.

“We’re thrilled to have Coach Frey join our staff,” Cutcliffe said in a statement. “It isn’t often you have the opportunity to add an individual who, within the landscape of college football, played at the highest level, has coached at the highest level and comes with 20-plus years of experience on the sideline. Coach Frey’s coaching and mentoring abilities are inspiring, and he will have an immediate and positive impact on the young men in our program. We look forward to welcoming Greg, his wife Andrea and children into our football family.”

In 2017, Frey was the tackles/tight end coach as well as running-game coordinator at Michigan. Frey comes to Duke after a one-season stint (2019) at Florida as a quality control analyst.

“As you go through life and build your family and your career, who you surround yourself with becomes very important,” Frey said. “What attracted me so much to Duke University was the faith, the family and the football, as well as the way Coach Cutcliffe runs his program. As we move forward, we want to be at the forefront of building the culture and championship level play that Duke expects. I’m excited to get started and can’t wait to go.”

A talented new addition to the Virginia Tech football roster is officially official.

After playing in the first four games of the 2019 season at Rutgers, Raheem Blackshear, a team captain, opted to sideline himself for the remainder of the campaign in order to preserve a year of eligibility. Three months later, Blackshear indicated on Twitter that he has decided to leave RU and continue his playing career with the Virginia Tech football program.

Two weeks after that social media announcement, the Hokies confirmed via Twitter that the running back is signed, sealed and delivered.

In addition to Virginia Tech, Blackshear had also considered a transfer to Temple.  A return to Rutgers for the back was in play as well.

It’s expected that Blackshear, a redshirt sophomore, will seek a waiver that would allow him to play immediately for the Hokies in 2020. If that appeal is denied, he would be left with one season of eligibility he could use in 2021.

A three-star 2017 signee, Blackshear ran for 238 yards as a true freshman. The next season, he led the Scarlet Knights in rushing with 586 yards.

Blackshear could also be a significant asset in the Hokies’ passing game.

In addition to being the leading rusher in 2018, Blackshear also led the team in receptions (44), receiving yards (367) and receiving touchdowns (two). Despite playing in just four games this past season, he was second on the Scarlet Knights with 29 receptions (the leader, Bo Melton, ended up with 30) and 310 yards (Melton had 427). His two receiving touchdowns were tied with Melton for the team lead as well.

Mississippi State mourns passing of De’Runnya Wilson, 25, whose death is being investigated as a homicide January 21, 2020 9:00 pm