And the biggest domino of the 2018-18 college coaching carousel has fallen.

Late last month, it was reported that Urban Meyer would address his coaching future following the Big Ten championship game.  While that report suggested Meyer would coach the 2019 season before stepping down, that won’t be the case as Ohio State confirmed Tuesday morning that the 54-year-old Meyer will retire from coaching following the Buckeyes’ appearance in this season’s Rose Bowl game New Year’s Day.

Additionally, the football program announced that Ryan Day, who served as acting head coach for the first three games of the 2018 season while Meyer was suspended, will be named as OSU’s next head football coach. 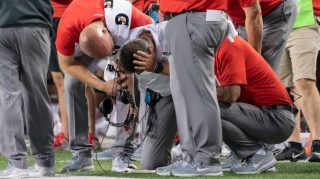 It had been reported in late October that there was “friction” between Meyer/the football staff “and athletics leadership as well as within the program itself”; the head coach subsequently attempted to knock down that report, for what it’s worth. CFT had caught wind of speculation that it wouldn’t be surprising at all if Meyer were not the Buckeyes’ head coach next season, whispers that grew a little louder given the embarrassing loss in West Lafayette this and what some have described as Meyer’s “anguished… emotional… erratic” sideline demeanor.  And then there is the arachnoid cyst that puts pressure on the coach’s brain and sometimes causes the kind of headaches that dropped him to one knee on the sidelines during the Indiana game earlier this season.

Add all of that to the battering Meyer’s reputation took nationally over the Zach Smith situation and the coach’s response to allegations of domestic abuse, and a growing number of observers wondered aloud how much longer Meyer will remain as The Head Coach at The Ohio State.

It has been previously reported that OSU was discussing making the 39-year-old Day, who drew near-universal praise for his handling of the Buckeyes during Meyer’s suspension, a de facto head coach-in-waiting; Smith subsequently addressed the situation without really addressing it.

In nearly seven full seasons as the head coach of the Buckeyes, Meyer has gone 82-9, winning 10 or more games in each of his first six seasons; the Buckeyes are 9-1 with Meyer as the head coach in 2018 and can get a 10th win by beating Washington in the Granddaddy of Them All next month.  OSU has won outright or shared seven division titles, three Big Ten championships and one national championship.  And, of course, Meyer beat hated rival Michigan all seven times he faced them, including the last three with Jim Harbaugh as head coach.

An Ohio native who played his college football at Cincinnati, Meyer’s first coaching job at the collegiate level came as a graduate assistant on Earle Bruce‘s OSU staff in 1986-87.  He was the wide receivers coach at Notre Dame from 1996-2000 before moving on to his first head-coaching job, directing Bowling Green from 2001-02 before leaving for the same post at Utah.

After two years with the Utes, Meyer moved on to Florida for the next six seasons.  After winning a pair of national championships in Gainesville, Meyer informed his family in December of 2009 that he was stepping down as the head coach of the Florida Gators; less than 24 hours later, he had stepped back up as the head coach of the Florida Gators.  A year after that flurry of events, and amidst health concerns, Meyer stepped down for good, citing a desire to spend more time with his family.

In late November of 2011, after spending that season as a college football analyst at ESPN, Meyer was officially announced as the 24th head coach in Ohio State history.