It was not so long ago ACC commissioner John Swofford set the public challenge to the entire conference to step up their game on the big stage when the opportunities to impress and change the narrative about the ACC as a whole was needed. Fast-forward a few years, and the ACC has done just that. Heading into the 2018 season, the ACC is in position to once again make a solid case for being considered the top conference in the sport.

Leading the way once again should be Clemson, with Dabo Swinney looking to take the Tigers to a fourth straight postseason berth. The Tigers begin the season ranked second in the major polls (and sitting on top of our own CFT Top 25), which has become the new norm for the three-time defending ACC champions. The biggest question Clemson seems to have is who should play quarterback, but that should not get in the way of what Clemson’s season could yield. Whether it is Kelly Bryant or Trevor Lawrence, the Tigers offense should continue humming right along to the ACC Championship Game, with a playoff spot within sight for a fourth consecutive season. Only Alabama has a longer streak of playoff appearances going, as Clemson is well aware after playing the Crimson Tide each of the past three years, including twice in the national championship and last year’s semifinal round. Clemson wasn’t quite up to par to take on eventual national champion Alabama last year, but this year’s Tigers will grow from that experience and thrive behind arguably the nation’s top defensive line starring Clelin Ferrell, Dexter Lawrence, and Christian Wilkins.

If Clemson is the model of consistency in the ACC, then Miami is the program looking to prove last year was not a fluke. Mark Richt took Miami to its first appearance in the ACC Championship Game in his second season on the job, but Miami’s playoff bubble burst by losing the final game of the regular season at Pitt and then against Clemson in the conference championship. Miami’s season ended with a third straight loss in the Orange Bowl against Wisconsin so the ‘Canes will look to take their turnover chain swag and shrug off a rough ending to the 2017 season. Miami’s offense may still have room for improvement even with Malik Rosier returning at quarterback, but the defense should make Miami a formidable foe once again. With Shaq Quarterman and Jaquan Johnson leading the defense, the Hurricanes will look for an early statement to start off the year in the season opener against LSU in Arlington. If Miami beats LSU, then the Hurricanes will be in great position to flirt with an undefeated regular season once again, at least until a showdown in Blacksburg against Virginia Tech in mid-November.

Justin Fuente has done well with the Hokies, although he will have one of his youngest teams yet hoping to make a run in the ACC Coastal Division this fall. That may not be a tremendous setback given how the schedule will allow for that talent to come together and find their groove before the bulk of the ACC schedule (Virginia Tech opens on the road at Florida State though). Virginia Tech should be a team that improves as the season plays on, and they could be a team capable of knocking Miami out of the ACC title hunt. At the very least, Virginia Tech could be Miami’s biggest division threat, although nobody should ever underestimate a Georgia Tech team returning nine offensive starters, including senior quarterback TaQuon Marshall, this could be one of those years Georgia Tech makes something happen. The Yellow Jackets could pull a pivotal conference upset with home games against Clemson and Miami.

This could be a year of lower expectations at programs like Louisville (so long Lamar Jackson and nearly everyone on defense, but hello wide receiver Jaylen Smith) and NC State (although the Wolfpack do have Ryan Finley at QB, but like Louisville, nearly everyone on defense is gone, including Bradley Chubb). And a program like Boston College (perhaps the best Steve Addazio has coached yet with nine returning offensive starters including sophomore running back stud AJ Dillon and a strong defensive ability). Syracuse might even sniff a bowl game, while North Carolina and Virginia could have tough paths to the postseason.

And, of course, Florida State is coming in with some new energy provided by new head coach Willie Taggart. Expecting the Seminoles to flip a switch and dethrone Clemson may be premature this season, but after a rough 2017 season, Taggart may be just the guy to turn the page as Florida State begins bouncing back to being what you expect from Florida State. Having running back Cam Akers sure helps. The defense may not have all of the pieces in place just yet with so much roster turnover, but the defensive line is solid with senior Demarcus Christmas and potential breakout player Marvin Wilson. Florida State won’t stay down for long, but making a serious run at Clemson in 2018 may not be likely. 2019, however, could be a different story. 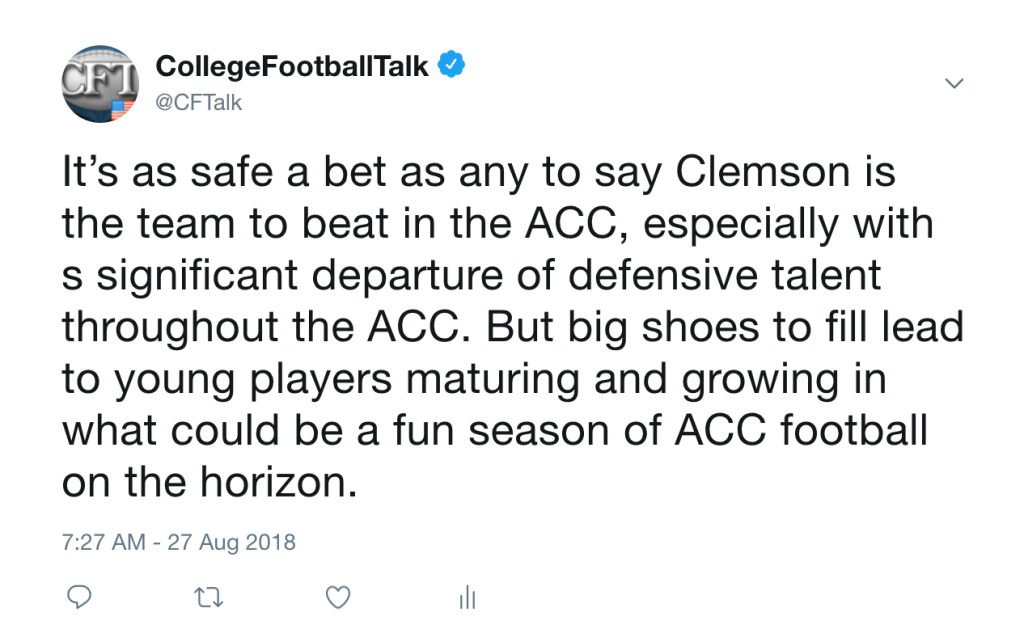 Middle Tennessee State was the landing spot for a Power Five football transfer earlier this month.  Now, the Conference USA school is on the wrong end of the portal.

According to 247Sports.com, Randall Johnson has entered his name into the NCAA transfer database.  An MTSU official has subsequently confirmed that the quarterback is indeed listed in the portal.

Johnson began his collegiate career at Reedley College in 2018.  As a true freshman, he was named as the Golden Coast Conference Offensive Player of the Year.  That year, the California native threw for 2,832 yards and 28 touchdowns.  He also ran for another 797 yards and 14 scores.

In the 2019 recruiting cycle, Johnson was a three-star prospect.  On the 247Sports.com composite, Johnson was rated as the No. 4 dual-threat junior-college quarterback.

In his only season with the Blue Raiders, Johnson played in one game.  In that lone appearance, Johnson ran for three yards on a pair of carries. He didn’t attempt a pass.

May 18, Kenneth Major committed to MTSU.  The cornerback was a starter at Purdue.  He’ll be eligible to play for the Blue Raiders in 2020.

You can officially put Tulsa on the football transfer portal tote board for the first time in a while.  And not in a good way.

According to 247Sports.com, Malik Jackson has made his way into the NCAA transfer database.  That would be the wide receiver’s first step in ultimately leaving the Tulsa football team.

Thus far, there been no word from either the program or the player on Jackson’s status moving forward.

Jackson was a two-star member of the Tulsa football Class of 2017.  The Taylor, Texas, native didn’t see the field at all during his time with the Golden Hurricane.

It’s likely Jackson will be leaving the AAC school as a graduate transfer.  That would allow him to play immediately in 2020.  He would also have another season of eligibility to use in 2021 as well.

Earlier this offseason, Tulsa had welcomed a trio of Power Five transfer into the football program.

All three of those transfers will have to sit out the 2020 season to satisfy NCAA bylaws. Johnson and Prince will have two years of eligibility remaining, Boomer three.

Late last month, Kyle Fourtenbary opted to enter into the NCAA transfer database.  That was his first official step in leaving the Western Kentucky football team.  Three weeks later, the tight end took the next by announcing on Twitter he is headed to Northern Iowa.

The Panthers play at the FCS level.  That will allow Fourtenbary to play immediately in 2020.  He is also a WKU graduate, so that would’ve granted him immediate eligibility as well.

The upcoming season will be Fourtenbary’s final one.  At least, at the collegiate level it will.

“Excited to announce that I will be transferring to the University of Northern Iowa to finish up my last year of college football!” Fourtenbary tweeted. “Looking forward to a great season.”

Excited to announce that I will be transferring to the University of Northern Iowa to finish up my last year of college football! Looking forward to a great season @UNIFootball pic.twitter.com/rnCZTrXRqP

A two-star 2016 signee, Fourtenbary redshirted as a true freshman.  The following year, he caught eight passes for 96 yards.  Those numbers were good for third among Hilltoppers tight ends.

The 2018 campaign turned out to be a breakout season for Fourtenbary.  That year, the 6-4, 245-pound Alabama native caught 36 passes for 302 yards and two touchdowns.  He started 11 of the 12 games in which he played.

Entering the 2019 season, Fourtenbary was named as part of the Mackey Award preseason watch list.  Last year, though, he totaled just 108 yards and a touchdown on nine receptions in the first season under new head coach Tyson Helton.

Jarrian Jones spent the first portion of the Egg Bowl rivalry on the Mississippi State side.  Now, he’s headed to the other.

Earlier this week, Jarrian Jones became the fifth Mississippi State football player to enter the NCAA transfer database in seven weeks.  This weekend, he became the latest MSU player to find new home as the defensive back has flipped to the Ole Miss side of the Egg Bowl rivalry.

After sitting out the 2020 season, the defensive back will have three years of eligibility to use starting in 2021.

The four other Mississippi State football players who have entered the portal in nearly seven weeks?

College Football in Coronavirus Quarantine: On this day in CFT history, including NC State transfer QB Russell Wilson visiting Auburn May 24, 2020 8:42 am

Report: Kentucky’s Chris Oats hospitalized with ‘very serious’ medical issue not related to COVID-19 May 23, 2020 9:43 am

College Football in Coronavirus Quarantine: On this day in CFT history, including James Conner proclaiming his ‘body is clean of cancer’ May 23, 2020 8:28 am

Baylor’s Paul Matavao-Poialii is back in the transfer portal for second time in three weeks May 22, 2020 2:10 pm